2009’s surprise smash ‘District 9’ propelled the South African director into Hollywood. But has he managed to repeat its success with ‘Elysium’?

South African writer-director Neill Blomkamp’s 2009 debut ‘District 9’ combined smart sci-fi action with gritty social realism and was a box-office smash. It even won an Oscar nomination for Best Picture. Thirty-three-year-old Blomkamp’s big-budget Hollywood follow-up, ‘Elysium’, is cut from similar cloth: Matt Damon plays a futuristic factory worker whose only hope for survival after a radiation leak is to get to Elysium, the orbiting paradise reserved for Earth’s richest citizens.

We sat down with Blomkamp in an upscale London hotel, where he looked around at the plush furniture and gold trimmings and laughed. ‘I suppose this is called irony.’

How much did your upbringing in Johannesburg feed into ‘Elysium’?
‘A lot. There’s no question that how Johannesburg operates is what made me interested in the idea of wealth discrepancy. Elysium could be a metaphor for just Jo’burg, but it’s also a metaphor for the third world and the first world. And in science fiction, separation of wealth is a really interesting idea to mess with.’

So the social commentary in ‘Elysium’ is most important for you?
‘No. There has to be the popcorn genre element or I don’t engage the same way. I like action and vehicle design and guns and computer graphics as much as I like allegory. It’s a constant balancing game. I want audiences to be on this rollercoaster that fits the Hollywood mould, but I also want them to absorb my observations. I don’t want them to feel like they’re being berated by all this political stuff. But the flipside is a movie about nothing, just explosions and car chases.’

Are you a political person?
‘I don’t think so. I think that people who make films and think they’re changing the world are sorely mistaken. If that really is your goal, there are far better ways to do it. I’m making politically observant films for audiences.’

Did you actively seek out Matt Damon for the lead role?
‘Yes. I thought it would be interesting to take this white, corn-fed American movie star and put him in a shack. If it was an unknown actor it wouldn’t work, it’d just be a dude in a shack. But with a star like Matt, it says to American audiences: this is the future of your country. Even this guy has to live in a shack.’

How realistic do you think the world of ‘Elysium’ is?
‘I think that “Elysium” the movie is unrealistic, with the space station and everything. I think “Elysium” the metaphor is completely realistic, it’s exactly where we’re going. We’re going to end up with this decrepit shithole of a planet that’s been driven into the ground. There’ll be small numbers of people holding onto the vast majority of wealth, with the hordes on the outskirts fighting over scraps, working in terrible conditions.’

Isn’t that quite a cynical view?
‘I suppose it is. I’m not actively trying to put across a cynical viewpoint, but I think that as a global mass we’re a bunch of disgusting, destructive organisms that ruin everything around us. We shot a lot of the film in Mexico City, and those aerial shots of concrete shacks stretching off to infinity, that’s not a special effect. It’s all real. You can’t fly for 45 minutes in a helicopter over that kind of poverty and not have a cynical view of humanity.’

Do you see any hope for the future?
‘Not really. I think wealth discrepancy isn’t solvable, given our genetic and social makeup. It’ll only be solved one of two ways: either we’ll create technology that will outthink us and change it for us, or we’ll use technology to change ourselves, and that trans-human biological entity will solve this shit. Or we’ll wipe ourselves out.’

Finally, I have to ask: did Disney come sniffing around you as a possible director of the new ‘Star Wars’ movies? Would you have been interested?
‘No, and no. When George Lucas made “Star Wars” in 1977, no one knew he was making it. Now it’s this huge thing. I’d rather fail 100 times trying to be George Lucas in 1977, to make something new and cool, than make someone else’s film. I do love the originals though. I mixed “Elysium” at the Skywalker Ranch. They opened the archives, and I have a photo of myself with the original Death Star model. Cool, hey?’ 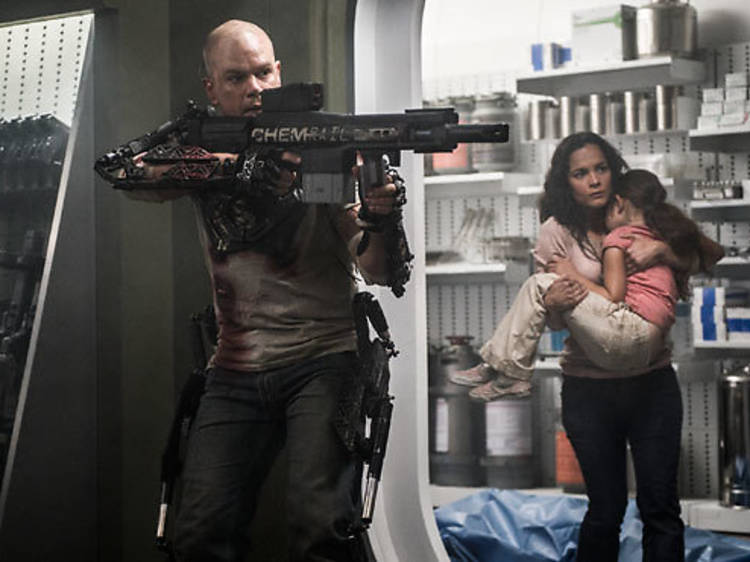 This is a messy, poorly structured film, riddled with plot holes and lacking any kind of satisfying conclusion. Perhaps it’s another case of raised expectations: from a first-timer, ‘Elysium’ might seem more exciting. But in the wake of ‘District 9’, we’re all too aware what this risk-taking filmmaker is capable of, and it’s far more than this conceptually bold, sporadically engaging but ultimately bland blockbuster.