The writer-director taps into his baseball-playing college years for his latest comedy, Everybody Wants Some!!

Modestly, in the relaxed posture of the college left fielder he once was, Richard Linklater tells me his theory of directing. “Working with the actors—the crew, too—there’s a little ‘head coach’ to it,” he explains in Tribeca’s Greenwich Hotel. “A good coach has a thing going with each player. Just like actors, they all have different needs. Sometimes you need to be motivating this guy all the time. But that person you leave alone. And that one, they can win the game, but they can’t tie it.”

Linklater, more than any other filmmaker working today, is comfortable playing the long game. He’s made 19 features, including his now-classic breakthrough Slacker (1991). And four of them have had a gestation that no other American moviemaker has ever attempted, let alone nailed. His ambitious romantic trilogy, Before Sunrise (1995), Before Sunset (2004) and Before Midnight (2013), represents a periodic every-nine-years collaboration with actors Ethan Hawke and Julie Delpy, growing in subject matter from college-aged impulsiveness to middle-aged regrets to rekindled passion. And Boyhood (2014), famously, is the Oscar-nominated film Linklater shot over 12 years in dribs and drabs, resulting in a hard-earned masterpiece of intimate domesticity and gentle rebellion.

Everybody Wants Some!!, Linklater’s latest—set in 1980 on a partycentric Texas college campus prowled by hypercompetitive athletes, self-possessed drama kids and a spirit of opening doors—may be his biggest stretch to date. It’s the first movie named after a Van Halen song. (“First and last,” the director jokes, though he’s insistent on keeping David Lee Roth’s yowling double exclamation points.) It’s suffused with the best pop music ever made: bouncy hits from 35 years ago that turn the experience of watching the film into an ear-to-ear grin. And improbably, after so many triumphs, it’s the warmest effort of his career.

“Trust me, it’s a lot easier to think about making a movie for 12 years than to actually make one for 12 years,” says Linklater, the mind-boggling Boyhood still in his rearview mirror. “But that said, I’ve been trying to get this one made for, I guess, this century. About the time that Boyhood was starting, I was starting on this. It’s a memory film, as personal as anything else I’ve done—which is, you know, quite a bit.” Yet despite these ambitious, drawn-out projects, Linklater somehow maintains a relaxed demeanor. (Perversely, I want to know what makes the guy furious. “Hey, to you New Yorkers: Ted Cruz is much more scary than Donald Trump,” he zings under his breath.“Believe me, he’s from my state. He’s much more dangerous. He’ll take the whole country off the cliff.”) 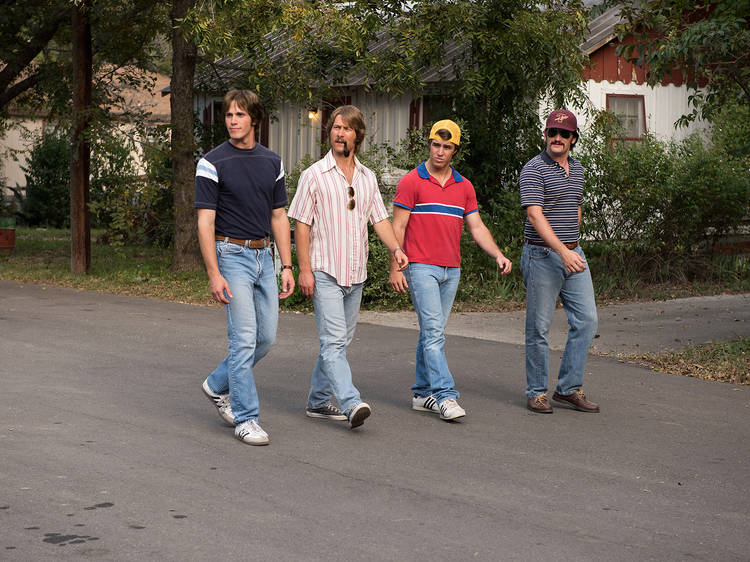 Drawn closely from his time playing ball at Sam Houston State University in the late ’70s—Linklater dropped out, worked on an oil rig and then moved to Austin to become an indie filmmaker—and an encyclopedic library of hundreds of songs, Everybody Wants Some!! is the director’s first full plunge into open-hearted nostalgia. Fans will point to Linklater’s euphoric Dazed and Confused (1993), set during the bicentennial summer of 1976, as a younger cousin, but the filmmaker sees a difference. (He does call the new film a spiritual sequel to Dazed.) “I used to say Dazed was anti-nostalgia,” he explains. “You can’t watch that movie and possibly want to go back to that time. It sucked, you know? I’m talking about high school. But college? It was a great time to be a young person. Pre-AIDS, pre-Reagan, all that. It was a fun moment, culturally. And it was cheap. Kids are under so much pressure now. My daughter [Boyhood’s Lorelei Linklater] just got out of college. It’s so expensive; there’s so much expectation, and the job market sucks.”

The problems that the characters of Everybody Wants Some!! encounter—mainly Jake (Blake Jenner), a freshman pitcher making his way through the squad’s hazing over the course of one debauched weekend—are much different. Will the team gel in time to take State? Will that cute coed return my call? How much bong smoke can my lungs physically accommodate? And perhaps most importantly: Is there more to life than the baseball diamond? It’s a deceptively simple story, but as Jake and his new friend tube- raft on an August afternoon, dreaming out loud and flirting, it’s impossible not to think about Boyhood and that film’s free-floating optimism.

Moments like this are a Linklater speciality. “This is not the kind of comedy that studios want to do,” he says, a veteran with few illusions. “You know, no stars, ensemble, no plot. It’s just not in their wheelhouse at all. They don’t know what it is—it’s just the spell of itself.” The director admits he got lucky between keeping the budget low and having more political capital to spend after the colossal success of Boyhood.

But in a deeper sense, that’s what Linklater has always done. He’s a smuggler of authentic experience into the mainstream, a filmmaker who cherishes feverish physicality and the moments that keep us young. (Linklater’s most well-known film may still be School of Rock, with Jack Black’s guitarist turned teacher kicking over desks in front of stunned 10-year-olds.) He’s seen the indie world that he largely inspired with Slacker become an industry, and he smiles at the irony of Everybody Wants Some!! having its world premiere in Linklater’s longtime hometown of Austin at SXSW. “If you remember a time, in the ’80s, when there was clearly this kind of vibe, these indie movies that were really speaking to you—that was special,” he recalls. “Pretty radical. And you supported it; you went to that film. That was your first choice.”

Unapologetically, Linklater is still that guy, still getting away with it, like the characters in his latest movie. There’s a sense of duty to it. (Linklater allowed Bernie Tiede, the real-life convicted murder and subject of his 2011 black comedy, Bernie, to live in his garage apartment as a condition of his release.) His gift, as with all the great athletes, is stamina.

Everybody Wants Some!! opens Friday, April 1.