The star of 'Knocked Up' talks about facing the biblical apocalypse in his new film, 'This Is the End'

Unlikely superstar Seth Rogen (‘Knocked Up’, ‘Superbad’) is asking for trouble with his new movie. He co-wrote ‘This Is the End’ with regular co-conspirator Evan Goldberg, with whom he wrote the likes of ‘Pineapple Express’ and ‘The Green Hornet’ – although this is the first time the pair have co-directed one of their scripts.

‘This Is the End’ sees 31-year-old Rogen and frequent co-stars James Franco, Jay Baruchel and Jonah Hill as twisted versions of themselves, all trapped in Franco’s plush LA mansion on the eve of the apocalypse. It should be a self-indulgent mess, and it’s hardly perfect, but thanks to Rogen and Goldberg’s witty pastiche of the hip Hollywood scene, it’s frequently a very funny, shaggy bad-taste romp.

Were you aware you’d be accused of massive self-indulgence with this movie?
‘Definitely. That’s the line we were walking. But there’s a difference between self-referential and self-indulgent. I think if it was just a two-hour movie about ourselves, and people weren’t dying or getting raped by devils, it would’ve felt a lot more indulgent. But that initial concept is just a way into this other, crazier movie. The conversations we had weren’t about what we wanted to do as actors or writers, it was, “If we were in a movie theatre, what would blow our minds?”’

You could have made a zombie movie or an asteroid movie. Why choose the biblical apocalypse?
‘It was the funniest one! As Jewish kids growing up in a city [Vancouver] with not a lot of Jews, we quickly realised that a lot of Christians believe that you’re going to hell. And that was kinda funny to us. So the joke was: What if they’re right? What if everyone gets sucked up to heaven and we’re the only ones left? Then we read the Book of Revelations, and it plays like a movie. It’s epic. And we watched a few of those crazy Christian propaganda movies. They’re fuckin’ nuts. They’re crazier than our movie.’

How involved were the actors in shaping their screen personas?
‘We wanted them involved, so they’d be comfortable. Franco’s character changed the most. He came up with the idea that he’s obsessed with me. Not my idea, I’m pleased to say! The early scripts painted him as this douchey, artsy guy, and he said he needed something that was redeeming or sweet, and that’s what he came up with.’

Emma Watson from the Harry Potter films plays herself. Why her? Did you have a shortlist of unlikely actresses and pick the funniest?
‘That was basically it. She was the most random person we could think of. We think she’s a good actor, of course, but it was a shot in the dark. It’s a shock that she agreed to it. I’d never met her before she showed up on set. We couldn’t believe she was there. She went for it. It was crazy.’

If you continue directing, would you consider making a serious movie?
‘I don’t know if I would, honestly. I think it’s more ambitious to make comedies. To me, you can make a comedy about anything, literally. There’s no subject that, if you’re smart enough in how you approach it, you can’t make funny. A movie like “50/50” is the most ambitious kind of movie, a comedy about something serious [cancer]. To me it’s just less fun to make non-comic movies. When we’re on set, and we’re looking at each other and thinking, “I can’t believe we’re doing this,” which happened a lot on this movie, that’s the most fun.’

I hear you and Evan Goldberg are now making ‘The Interview’, about a plot to assassinate Kim Jong-un. Are you going to pop over to North Korea to do some research?
‘The last thing I should do at this point is go to North Korea. I really hope they haven’t heard about it!’

Read our review of 'This Is the End' 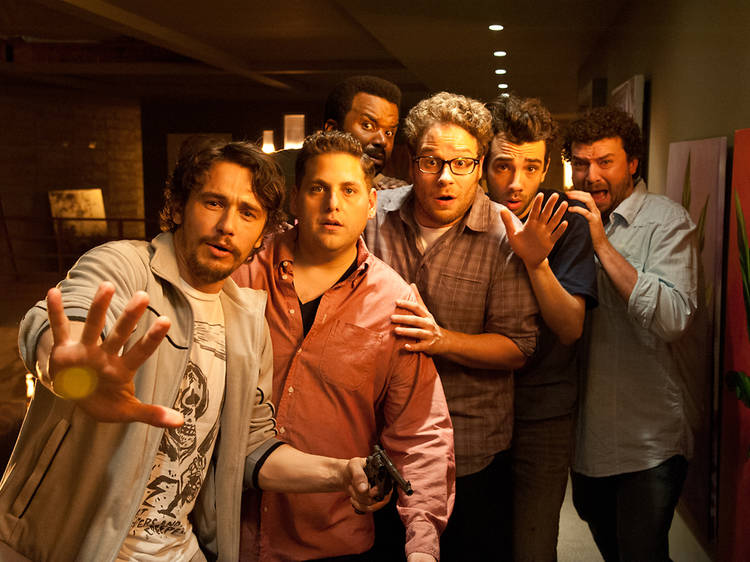 This Is the End

‘There’s a party at Franco’s...’ If these words, uttered a few minutes into ‘Superbad’ writers Seth Rogen and Evan Goldberg’s directorial debut, make you feel apprehensive, you’re not alone. Is this going to be one of those ‘look at me’ comedies, intended to provoke love, awe and sympathy for LA’s wayward movie brats? Then Michael Cera gets a lamppost through the ribcage, and things begin to look up...

Read review
See the full review of 'This Is the End'