As 'Star Trek Beyond' launches into cinemas, screenwriter-star Simon Pegg discusses his journey from London to Hollywood

It’s been like losing a friend, seeing Simon Pegg go Hollywood over the years. He’s given up drinking, he’s slim and fit, he’s BFFs with Tom Cruise. It used to be so different. Pegg was the quintessential noughties English everyman. He was the one holing up in a pub in ‘Shaun of the Dead’, the guy smoking weed on his couch in ‘Spaced’.

He was one of us. A mate. But then he made the leap to Hollywood stardom, getting cast as Scotty in ‘Star Trek’ and appearing in ‘Star Wars’. He’s back this week as Scotty in ‘Star Trek Beyond’, which he co-wrote. That’s some serious dream-come-true shit, right there. Before meeting him, I expect the Hollywood to shine through, the arrogance to prevail. But it turns out, Simon Pegg is lovely. Infuriatingly bloody lovely.

You’re not just starring in ‘Star Trek Beyond’, you’ve bloody written it! What was going through your mind when you took on the project?

‘It was a catch-22 in a way. I found writing “Star Trek” borderline terrifying, but at the same time, I couldn’t say no. It was: I’m going to have to embrace the terror to do this. Because it’s something I really value and care about. And it’s one of those things where you’re essentially putting yourself in the firing line for those who expect a certain something – that’s everyone these days.’

What scared you about doing it?

‘Just being given the keys to this kingdom. It’s a gigantic, historically loved, 50-year-old story. In all of its iterations, it’s probably the most significant science-fiction anthology of the modern age. To be given access to that in a creative capacity felt daunting. It was like: Holy shit.’ 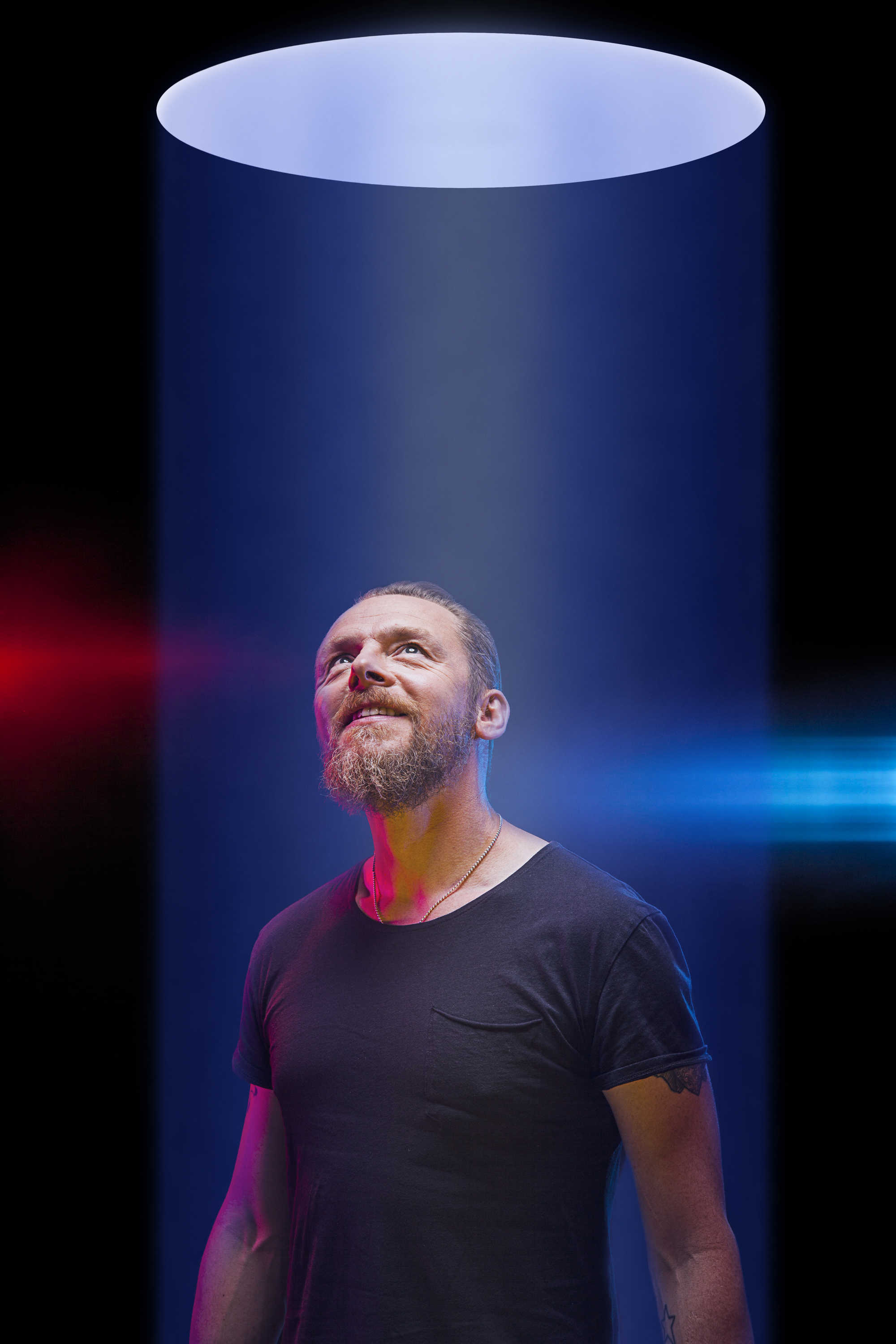 You don’t want to be the guy who fucked up ‘Star Trek’, I guess.

‘God, no. Absolutely. But then it’s frustrating as well when we get put in that position, because this film isn’t down to me. It’s down to a lot of people and we don’t want to be the group that’s seen as fucking it up. People have specific expectations and a specific sense of entitlement as well. Which is a shame, because for a story about a universe that is so inclusive and peaceful, the factions are fairly aggressive.’

Nerds. So you’ve done ‘Star Trek’ and been in ‘Star Wars’. Are you worried about where you go from here?

‘I had an odd sense of ennui after I finished “Star Trek”. I got home and thought: What do I want to do now? I genuinely didn’t really know. I kind of felt that I’d ticked a lot of boxes. So I think I’m going to evolve, and maybe I’ll retire from nerddom. You know, I’m an old guy now and I don’t feel the draw towards childish things as much as I used to. I would like to do more, maybe branch away to drama.’

It must be hard to just be seen as some nerd guy when you want to do your ‘Schindler’s List’.

‘I don’t know, when I was studying drama I just wanted to be at the RSC. I didn’t have any plans to be an ambassador for nerddom. Then “Spaced” happened. But I’ve had an amazing fucking time; there’s been a lot of wish-fulfilment.’

Let’s talk about ‘Spaced’ for a bit. Did you know you were perfectly capturing the post-university London experience?

‘We hoped we were. The plan was to always be as personal as we could and we hoped that would find a community. The sitcoms around then that were aimed at twentysomethings didn’t say anything to us about our lives. Like “Coupling” or “Game On”: they seemed to be about people we’d never met and they hung out in places we didn’t understand. It just felt like everyone who worked on “Spaced” knew they were doing something that was kind of different, but it was a punt.’

Is there a worry, with all of your success, that you can’t write characters as appealing and universal as the ones you created in ‘Spaced’?

‘There’s a worry about that, yeah, absolutely. I think with writing you have to tune into the truth. I couldn’t write a “Spaced” now, or about teenagers now, I don’t understand them. I’m not there. I think if you ever write from the standpoint of speculation, it isn’t going to feel real. So yeah, you kind of leave it behind in a way. It’s weird.’

So what does that leave you writing?

‘I guess stuff about being a father, having a mortgage, all that sort of stuff. I don’t know. Life changes, and my life is very different to how it was when I wrote “Spaced”. I was kind of like Tim then. But there’s no regret there. It’s not like: Oh, I wish I was still high and poor.’

Do you ever get tired of being labelled as a nice guy?

‘ “Nice guy”: there’s a faintly anaemic feeling about that. It’s very beige. I just try and be a good person as much as I can. You hope to treat people as you’d want to be treated. I can’t quite get with people who don’t mind about pissing people off. People with little empathy I find confusing and worrying to be around.’

Do you ever have moments when you realise you’re being a bit of a Hollywood knob?

‘Yeah, occasionally. But you have to keep a check on it. I was on a red carpet a while back and half an hour before that I had been applying cream to my dog’s anus; she had a bit of problem downstairs. Always remember your dog’s anus.’ 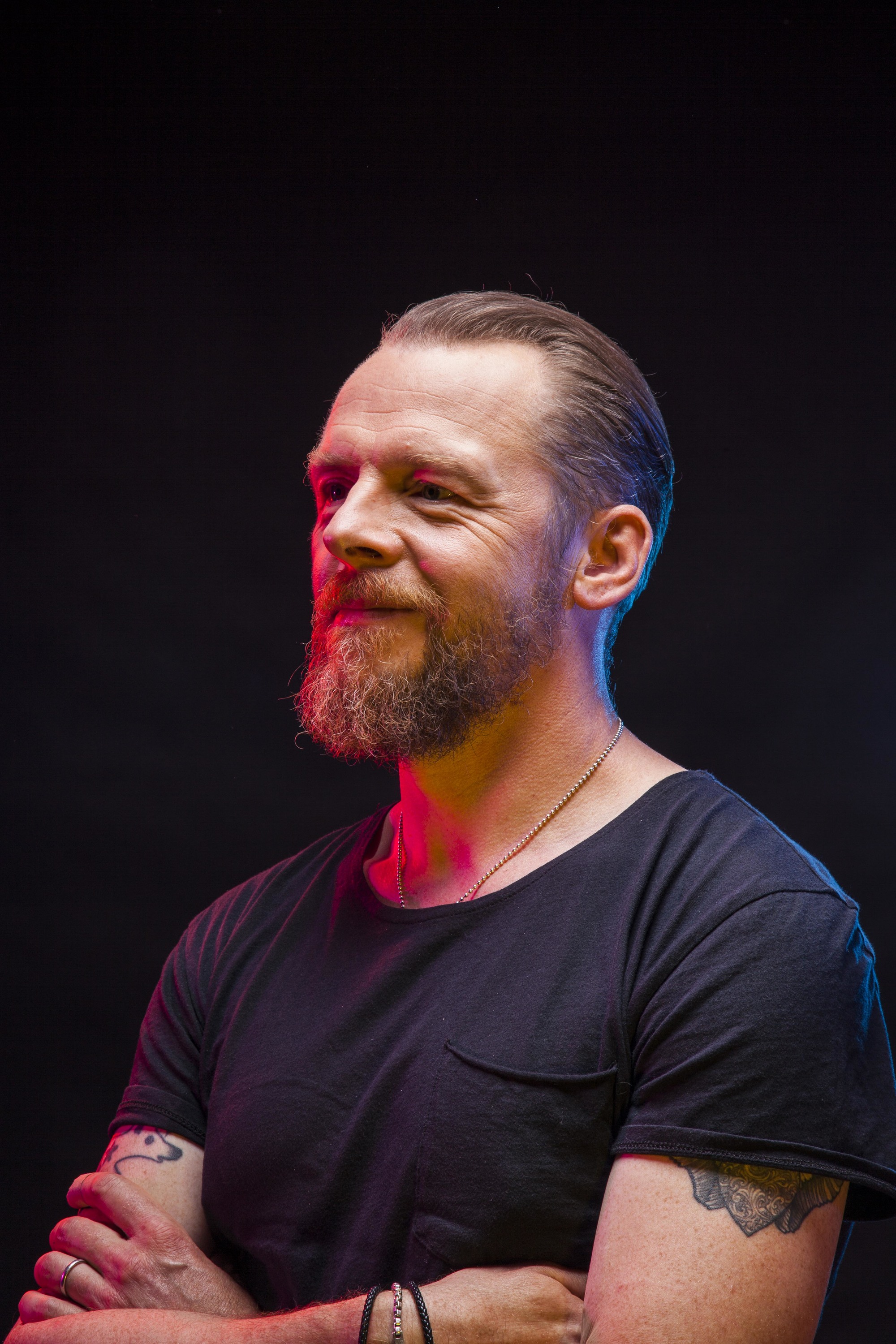 You don’t drink any more, which might surprise people who know some of your characters. Do you miss pub culture?

‘I do, but I missed it before I quit drinking, because I can’t really go into pubs now without some sort of little ripple. The more drunk people get, the more it lubricates people socially, so they’re more inclined to hug me or something.’

You don’t want that attention?

‘No. Well, yes. You value it. When people come up and say hi, you always feel hugely grateful, because it’s tough to do that. And you can’t really blame people for coming up and saying hello. If you’re not in the mood for it, don’t put yourself in that situation. Just don’t walk down the street and complain because people are saying hello.’

Now that the film’s about to come out, are you looking forward to a bit of anonymity, to it just being over?

‘I curse myself because there is that line in “Spaced” that says every odd-number “Star Trek” movie is shit, and this is an odd number: “Star Trek 13”. And I just know that even the most truculent hater out there will watch the film and maybe really like it, but say “He was right – it is.” ’

Got an out of this world itch that only sci-fi films can scratch? Consult our countdown of the 100 best sci-fi movies.