Simon Pegg: ‘When Tom Cruise broke his ankle I sent him a box of my films’

The actor on buying his ‘Mission: Impossible’ co-star get-well gifts, the art of collaboration and life in the country

Simon Pegg is seriously tickled to discover that his ‘Mission: Impossible’ character, Benji Dunn, has his own YouTube supercut. ‘Really?’ he grins. ‘I’ll have to look that up.’ It’ll probably be a minute or two longer by the time he gets to it, with the tech whiz and wannabe superspy likely to steal scenes again in the latest instalment, ‘Fallout’. The man’s played Tim in ‘Spaced’, Scotty in ‘Star Trek’, Shaun in ‘Shaun of the Dead’ and cameoed as a bilious space critter in ‘Star Wars: The Force Awakens’. So it’s strange to think he’s probably now best known for a character whose first scene – in 2006’s ‘Mission: Impossible III’ – he admits to fluffing horribly. Happily, things have picked up, and then some, for both character and actor since then.

Was it weird to have the same director for two ‘Mission: Impossible’ films in a row?
‘Well, McQ [director Christopher McQuarrie] wanted to make a film that felt different from the last one, in that “Mission: Impossible” tradition of them each being directed by different people. “Rogue Nation” was a bit of a buddy movie with me and [Tom Cruise], and this one is sort of an anti-buddy movie with Henry’s [Cavill] character and Tom. Me and Rebecca Ferguson and Ving Rhames are Ethan’s emotional linchpins. We go through some awful stuff – not everyone makes it.’

Tom Cruise famously broke his ankle during filming. Were you there for the accident?
‘I’d gone off to do another film. I was having a week off… I thought! It turned out to be 12 weeks. In the end, it was probably good because Chris was kind of writing it as we went and it gave us breathing space. There was a conspiracy going around that Tom had done it on purpose [laughs].’

‘Whenever I do anything difficult, I have the
Mission: Impossible theme music in my head.’

Did you send him grapes?
‘I sent him a pack of all my films. I bought them on Amazon, put them in a box with a note saying, “You’re going to be sitting around a lot – why don’t you watch these?” He sent me a very funny note back saying that he was going to watch them all.’

Were there ever plans for a ‘Mission: Impossible’ homage in ‘Spaced’?
‘It feels like there should have been but [‘Spaced’ characters] Tim and Daisy were more about the comic-book canon and sci-fi. Of course, ‘Mission: Impossible’ exists very much in the cultural subconscious. Whenever I do anything difficult, I have the theme music in my head. Even if I’m just crossing the road, it’s “dun, dun, dun-dun”.’

Be there, Dunn that: Pegg and the rest of the IMF team in action

You’re directing your first film soon. Have you always tried to absorb lessons from the filmmakers you’ve worked with?
‘Always, yes. It’s hard not to. Collaboration is always the overriding thing for me. Whether you’re an actor, director or the grip, you’re collaborating with other people. The more it can be a collaboration, the more effective this machine is.’

So your film won’t open with ‘From visionary director Simon Pegg’?
‘No. No shotguns on set, no autocratic yelling through megaphones. I’m going to find a really collaborative group of people.’

You’ve spoken out recently about your past battles with depression. Is Hollywood an unforgiving place when you’re struggling?
‘If you find it hard to ask for help, it’s a fucking awful place. But, then, anywhere is. What was weird was that this was it:  the glitz of Hollywood. The sort of thing every actor wants, yet it was horrific because I wasn’t in the right state of mind. And it certainly couldn’t pull me out of it, because it is just Hollywood – it’s not nirvana. It’s a hot city where they make films.’

You’re in a better place now?
‘Yeah, 100 percent – and I have been for eight years. It’s amazing how things get better as soon as you accept that you might need some assistance.’

‘Hollywood isn't nirvana. It's just a hot city
where they make films’

You’ve moved out of London. What do you miss about the city?
‘I like coming in for a bit of theatre. London is a city that has my heart forever but I don’t really miss it. Oh shit, this is Time Out! London is amazing and I miss it every day.’

Any indulgences in your new home?
‘I have a little shelf where I have every action figure and doll and plushy that I’ve collected of myself. My wife and daughter call it “the shrine”. It’s this ego bubble. But then you would, wouldn’t you? You’ve got a fucking action figure of yourself!’

Even your ‘Force Awakens’ character?
‘Unkar Plutt? Yeah, I’ve got his nose in a glass.’ 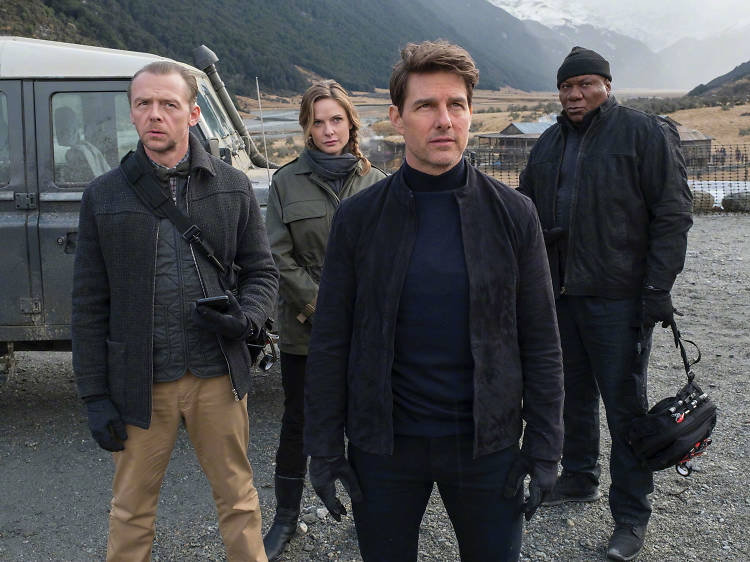