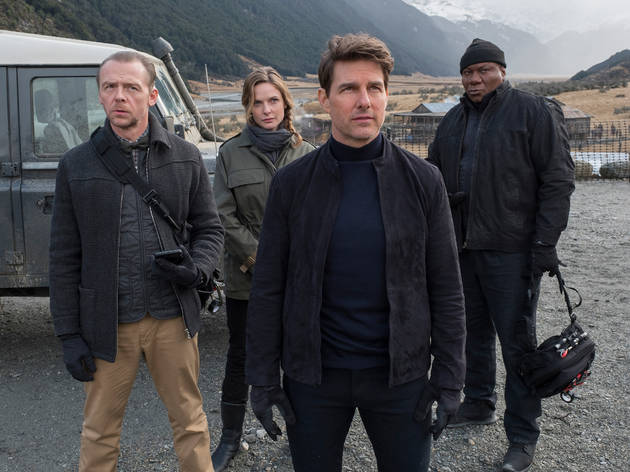 Hang on to your hats, Ethan Hunt’s back, better and bolder than ever.

Tom Cruise is 56 years old. Fifty. Six. And he’s been making ‘Mission: Impossible’ movies for 22 of those 56 years. By all rights, ‘Fallout’, his sixth high-flying mission, should be to ‘M:I’ what ‘A View to a Kill’ was to Roger Moore’s Bond (Moore being only a year older than Cruise is when he made his final 007): tired, creaky and a bit embarrassing.

Astonishingly, however, the opposite is true. This is easily the best, slickest and most daring ‘Mission: Impossible’ instalment. Not only that, it’s the finest action movie of the year so far. The bait-and-switching, double-crossing plot twists and twists again, with Hunt still haunted by his now-incarcerated ‘Rogue Nation’ nemesis Solomon Lane (a superbly creepy Sean Harris) and dealing with the global terrorist power vacuum left by Lane’s capture, but you won’t care with all the sinew-straining spectacle on show.

This is thanks largely to writer-director Christopher McQuarrie. Being the first director to return for a second go at the franchise, he brings a sense of continuity hitherto lacking. ‘Fallout’ is a direct sequel to ‘Rogue Nation’, bringing back most of the key players and upping the stakes from the most knowing of perspectives. McQuarrie also builds on the last film’s self-aware level of wit and, most importantly, its set-piece-crafting sophistication.

No action sequence is allowed to peter out, or be chopped to ribbons in the edit, or lean on the crutch of CG augmentation. From a frantic Parisian chase to a brutal brawl in a loo to the climactic mountain-skimming helicopter fight, it’s fantastically executed throughout. And it pays just enough attention to physics to make you feel like it all could really be happening.

Then, of course, you have Cruise at the heart of the maelstrom. Like, really there. If there are switches to doubles, they are ingeniously hidden. This guy commits to an insane degree, and in mainstream entertainment terms, ‘Fallout’ is up there with his best work. If he keeps McQuarrie on board, we’d happily see him do six more missions. We’re sure he could hack it.