Channing Tatum on Ho Hos, hustling and getting into shape for ‘Magic Mike XXL’

Channing Tatum has gone from actor most likely to appear on Cosmo’s Stud Meter to major-league Hollywood player. He talks to Time Out about getting his kit off again for ‘Magic Mike XXL’

When he was 19, after dropping out of university, Channing Tatum worked as a stripper. He made anywhere between 50 and 100 bucks a night in one-dollar bills stuffed into his thong. You can watch him on YouTube – he strips down to his pants but keeps his socks on, like someone’s little brother practising in his bedroom. This was in the late ’90s; after a year, he quit to work as a clothes-on hip hop dancer and in 2006 landed his big Hollywood break in the dance film ‘Step Up’.

Stripping should be a black mark on Tatum’s CV, along with modelling for Pepsi and Abercrombie & Fitch. But in 2012, he turned his seedy past into a slicker-than-life blockbuster, producing and starring in male-stripper comedy-drama ‘Magic Mike’, and reportedly pocketing $40 million when it went supernova.

He’s smarter than he looks: that’s what everyone says about Channing Tatum. Which I’ve always thought is a bit mean. But then, Tatum has himself taken the piss out of his high-fiving, sideways-basketball-cap, everything-is-awesome image. In ‘21 Jump Street’ he’s the cop so thick he can’t remember the Miranda rights (‘You’ve got the right to remain, um…’). But being a dumbass doesn’t get you the kind of winning streak Tatum has enjoyed: becoming one of the few actors to make three $100 million movies in a row (‘Magic Mike’, ‘The Vow’, ‘21 Jump Street’) followed by rave reviews and Oscar buzz for ‘Foxcatcher’. Now comes ‘Magic Mike XXL’, a sequel that takes the baby-oiled team of chiselled man-flesh on the road to a stripper convention in Florida for one last blowout performance.

In person, Tatum’s looks are as ridiculous as they are on screen. The LA hotel room where he’s doing interviews has had the bed removed. My theory is that someone was worried a lady journalist would fling herself at Tatum and wrestle him on to it. If Michelangelo were alive, he would be sculpting Tatum instead of David. (Or maybe co-star Joe Manganiello, who I’ve just spotted in the corridor gallantly carrying his make-up woman’s bag.) Neck like a wrestler’s, jaw like a mountain range – we just don’t make them like Channing Tatum here. He’s very polite too, all bro-charm and good manners.

You were on a no-booze, no-junk-food diet making ‘Magic Mike XXL’. Was that tough for you? Or are you a my-body-is-a-temple kind of guy?
‘Are you kidding? I have one enormous ab right now and it’s not even hard. I love food and I love indulging. My wife craves healthy food. I’m the complete opposite. I grew up down South, eating Cheetos and Ho Hos. Do you get Ho Hos in England? Little cake things. Processed, sugary, salted food. That’s what I grew up on. And I was a skinny kid. Then you hit a certain age, you start drinking beer and now it’s really easy to put it on. And you can’t fake it in “Magic Mike”. Usually on screen, if you’re butt-naked, [all you’re doing is] walking from the bed to the shower, so you can hold it all in.’

So you’re not in a hurry to get back into shape?
‘I haven’t worked out one time since “Magic Mike”. I know I’m going to have to do it again eventually. I’m not a good enough actor not to take my shirt off in a movie. So I’m just going to wait until that freight train comes.’

Didn’t you just use body doubles?
‘No! There were no body doubles in “Magic Mike”. I swear on my life!’

In the new film, Mike and the gang go to a stripper convention. Is that a real thing?
‘That is an actual thing. I don’t know why they call it a “convention”. They don’t have booths with people showing the next big thing in stripper technology. I went to two of them. Two thousand women in this enormous warehouse in Carolina in the Bible Belt. It was crazy.’

Did you find being a stripper demeaning, up on stage, your butt hanging out of a G-string?
‘No! You can’t demean a 19-year-old kid who’s chosen to be there. It wasn’t like I was out on the streets stripping for my rent. My parents would have taken care of me. I enjoyed the performing. It was the first thing I’d ever done on a stage. But I didn’t exactly like taking my clothes off. You see it on that YouTube video. As soon as I drop my drawers, I run off stage.’

The first ‘Magic Mike’ was a massive hit. It was a film about your life, that you got made. That must have been a good feeling.
‘Oh my God, it was a bit out-of-body. We could never have known that the first one would do what it did. I think we caught that interesting wave that “Fifty Shades” started. We sort of piggy-backed off that.’

There’s a suggestion in the film that women go to watch strippers for different reasons than men do. Would you agree?
‘Yeah, it’s interesting. I think it would take a smarter person than me to put it into words. But what I find is that men go to female strip clubs for a bit of actual fantasy fulfilment. It’s one-note. It’s visual. When you look at male stripping, it’s a bit of a clown show. You almost go to laugh at the situation more than you go to fantasise.’ 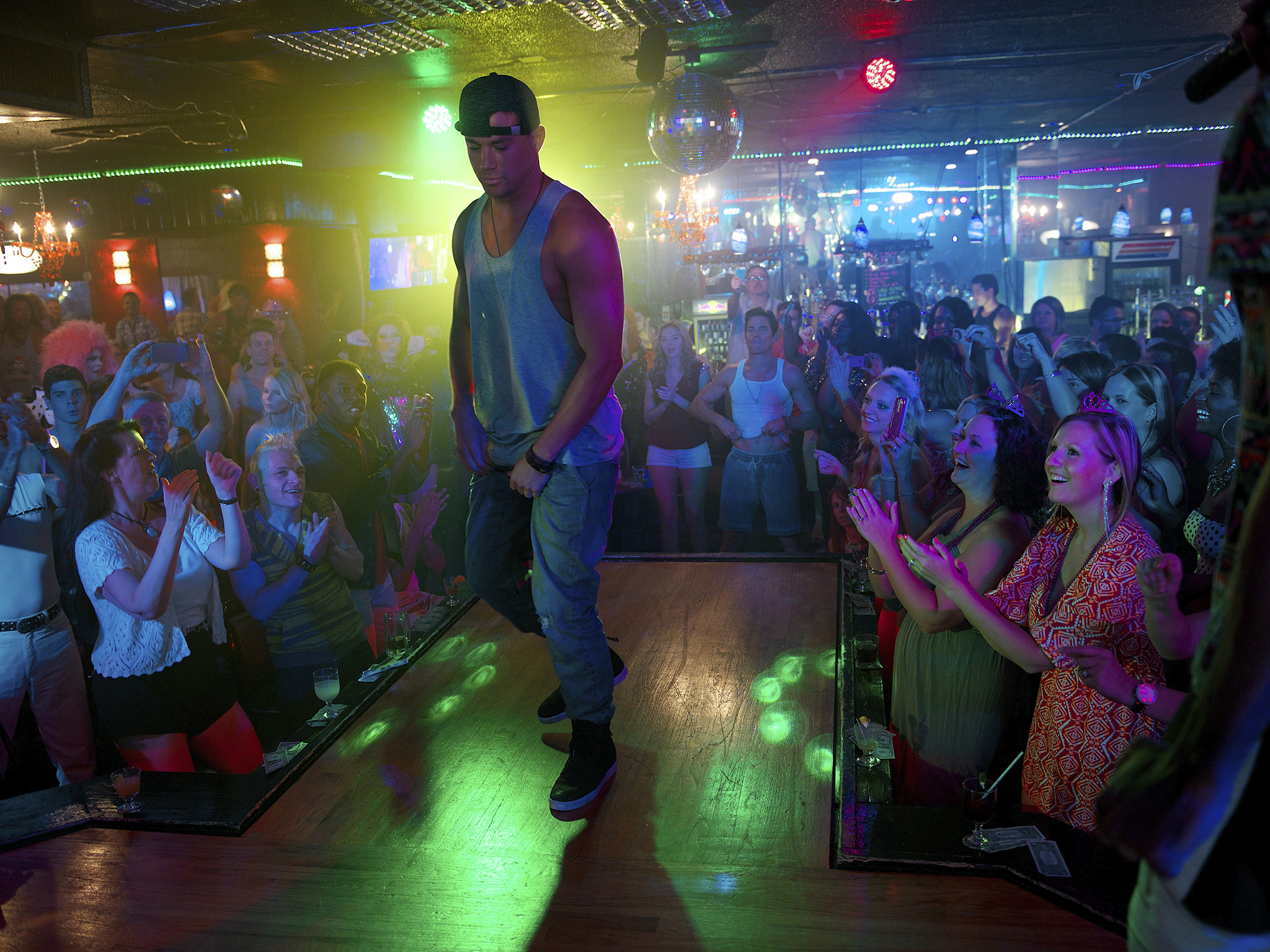 Mike is a bit of hustler. Is there a bit of you in him? You fought your way to getting decent roles.
‘Yeah, everybody’s gotta fight. You do have to hustle. I don’t think there are many people who get their dreams handed to them on a plate.’

Was ‘Foxcatcher’ a game-changer, in the sense that it showed people you can do serious acting?
‘I think the way people talk about it, for sure. And I was vying for that part really hard. I was like, “Look, put me in a dark room with whoever else you’re thinking about, and whoever comes out gets the part.” I think you end up fighting for someone to like your work or respect you. You just want to have done something good enough for someone to have liked and valued it. Once.’

You made four films back-to-back in 2013, and have done more since. Do you work too hard?
‘Not too hard. But I do too much. I can be the fat kid at the buffet. I’m like: I can do it. But being able to do it doesn’t mean that you should. It doesn’t mean you’re going to do the best work you can in all of them. I think that was a big lesson. Having a kid has taught me that.’

As a kid, did you dream of being famous – practising your Oscar speech in front of the mirror?
‘No way. That wasn’t my childhood. My dad had a roofing company and then he hurt his back. My mom worked at a bank. I don’t think they even listened to music. I was into sports. I wasn’t all that good at school, so I was always outside playing. My goal was to get a college scholarship to play football.’

What happened?
‘I got there, and then had a cold splash of water, realising it wasn’t what I wanted to do. The next two years after that was stripping and going down the rabbit hole of partying, just trying to find myself.’

How far down the rabbit hole did you go?
‘Far enough. I can promise you that. I got lucky. I came out without any bad scars or addiction problems. A lot of my friends didn’t. My best friend is not with us any more. It’s one of those things where you go: How did that not happen to me one night when I did X, Y and Z? When I think of the constellation of things that had to happen to get me here, it’s not enough to call it luck. I’m a super-lucky person, but nobody can be as lucky as me. Something else is going on. I’m not a religious person, but I am spiritual.’

Anyone who’s seen you on all fours in a dog-collar playing a sex slave in ‘This Is the End’ will guess that you don’t take yourself too seriously. Is that fair to say?
‘Yeah, and actually (I don’t know why I thought of this – your accent, probably) I was at the bar having a conversation with Benedict Cumberbatch after the Globes or one those. We were just sitting there having a beer. I was like: this is crazy, this is insane to me, I just can’t believe I’m here. I’m a wild fan of him. I’m in awe of the English actor thing. It’s super-studied. They’ll talk about a play that I’ve never even heard of. I just go: Damn! I can’t believe I’m in the conversation with these people who are true artists. Somehow I’ve got here. It’s strange.’ 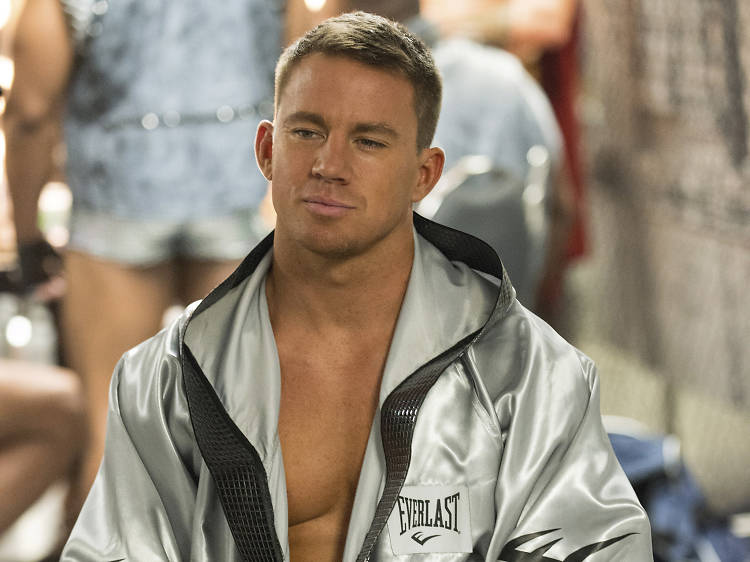 Male strippers – those baby-oiled studs the colour of over-brewed tea with buttocks waxed smooth like two Granny Smiths in clingfilm – are so lame that no ’80s revival can give them a comeback. The miracle of Steven Soderbergh’s 2012 film ‘Magic Mike’ was how un-naff it was. Based on star Channing Tatum’s own experiences as a teenage stripper, it even had one bronzed pec in the real world. For the sequel, Tatum is once again the main attraction.