Dubbed ‘“Withnail and I” with girls’ by Caitlin Moran, Emma Jane Unsworth’s novel ‘Animals’ was published in 2014. Now she has adapted it for a film directed by Sophie Hyde (‘52 Tuesdays’) featuring Alia Shawkat as debonair rebel Tyler and Holliday Grainger as sidetracked writer Laura. Powered by MDMA (smashed-up cola Chupa Chups), cocaine (icing sugar) and gallons of white wine (apple juice), their combined energy captures the euphoria of wild nights out in Dublin, the repetitive nature of a lifestyle of coming up and coming down, and the private desires that can drive even the closest friends apart.

This is a two-hander friend romance carried by your shared energy. As actors, do you know when you’re nailing that rapport?
Holliday Grainger: ‘You hope to. You can feel it if it feels fake, but I put a lot of my trust in Sophie, to be honest. It is difficult to bring that night-time energy when it’s 6am on a film set.’
Alia Shawkat: ‘You have to be present in each moment, then hope it all comes together. But it’s as much a surprise to us as anybody.’

‘I think that by being vulnerable you're able to be braver than by analysing something.’

‘Animals’ is about two friends trying to be free in different ways. Is it possible to be free as a woman while craving a traditional relationship?
HG: ‘Freedom is a state of mind and it’s up to you to make sure that you keep that, and that the people around you know you need it. Of course, there are responsibilities that come with having a family which are going to be not as freeing.’
AS: ‘You can have a very typical lifestyle and feel free. The important thing is that you choose it. That’s part of the question this movie poses. On the one hand you might agree with Tyler: you have to live free, poetic and dangerous; sleep with whoever. And yet if that’s not what Laura wants, how is that going to be valuable?’
HG: ‘Part of Laura’s journey in this film is realising what it is that she wants and not what has been dictated either by her own expectations, Tyler’s expectations, her boyfriend’s expectations or her parents’ expectations – trying to find her place and her own freedom and creative outlet.’

What advice would you give people trying to figure out a way of life that’s personally meaningful?
AS: ‘We’re just actors!’
HG: ‘Aren’t we all trying to figure that stuff out?’
AS: ‘Don’t take our advice.’
HG: ‘Watch the movie! [Laughs] Maybe you’ll get some nuggets.’
AS: ‘I’d say it’s worth trying something instead of regretting [not doing] it, which is a very basic piece of advice, but I think that by being vulnerable you’re able to be braver than by analysing something. It’s better to try and fail and see what happens.’

One striking moment in the film is when Laura looks in the mirror and realises she’s not having fun at a party. Is that something you’ve felt?
HG: ‘You do it at parties, you do it on set. Dressed as a character, you look in the mirror and go, “What the fuck am I doing?”’
AS: ‘The best thing is to be like, “I love you, you’re going to be okay. Just get yourself home and take care of yourself.” It’s the lowest moment but it’s the moment right before everything gets better.’

Tyler keeps saying, ‘You have to live to have inspiration to write’. How do you find the balance between living and working?
HG: ‘It’s hard, isn’t it? It does feel like you put your life on hold to shoot. There’s a lot of expectation on people to have it all and do it all; to be the best you can at work and creatively and still have a life and still do everything. Sometimes there’s not enough hours in the day. You have to prioritise.’
AS: ‘As actors, you’re pulling from real experiences, so you do have to engage with life. You can’t be working all the time, otherwise you don’t have anything to pull from, you’re just mimicking what an authentic moment between two humans might be. It’s the yin and yang of everything. In order to feel highs, you have to feel lows.’ 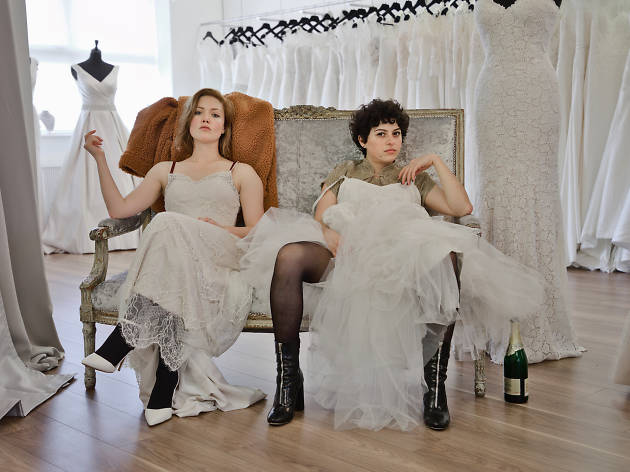