A major political speech is ruined by coughs and tiny falling letters; Nobel winners seem relaxed about genocide; and a man who confuses 7-Eleven and 9/11 leads America: please spare a thought for Armando Iannucci.

With ‘Veep’, ‘In the Loop’ and ‘The Thick of It’, Iannucci seems to have a monopoly on political ineptitude – only for real-life players to start muscling in on his turf. Not that the affable 53-year-old writer and director appears especially worried. We meet over the road from BBC HQ at Portland Place. It’s where, in the early ’90s, Iannucci met Chris Morris, his  long-time sidekick in satire,  for the first time. He got in Morris’s battered old Mercedes and drove around for hours conceiving their first great project, ‘On the Hour’. Tomorrow, Iannucci is meeting Steve Coogan to start writing the next chapter in the Alan Partridge story.

But it’s a different tyrannical egomaniac we’re discussing today. Iannucci’s new film, ‘The Death of Stalin’, is a brilliant imagining of the tense manoeuvring that took place after Stalin carked it in 1953. Based on a graphic novel, it is to Stalinism what ‘The Life of Brian’ is to Christianity: deeply irreverent, shocking at points, yet motivated by a righteous morality that balances comedy and drama on a knife edge. As Iannucci says of it: ‘I’ve been telling people it’s a funny film, but they’ll be a bit terrified too...’

What’s the film about, in a nutshell?
‘It’s a sort of comedy about the events that happen in the ten days after Stalin falls ill and dies – the power struggle in the Kremlin and how that affects the outside world. In a country where everyone has been in a state of terror for the last 20 years or so. The kind of state where if you tell the wrong joke or stop applauding a speech too early, things could happen to you and your family. So maybe it’s best to call it an unsettling comedy!’

It’s based on a graphic novel, but did you have a burning desire to engage with that period of history before you read it?
‘Well, yes, separately I’d been looking at dictators and charismatic leaders for a while, spurred on by the rise of Ukip and Le Pen in France and wondering how certain individuals, by dint of their personalities, captivate a mass of people. This was all before Trump, by the way. But also that time fascinates me. It’s at the heart of what we consider the Kafkaesque terror state, and yet it’s never really been treated in cinema. It’s almost as though Nazi Germany is sexier in terms of selling films, y’know?’

Got it: Nazis are sexy.
‘That’s very much off the record! Anyway, it struck me that there’s something inherently absurd and comic about totalitarian states – the process of saying “You’re going to believe this, until we tell you to believe that.”’

All the actors play their parts in their own accents. Was it fun to make Stalin a cockney?
‘Well, the actual Stalin was Georgian, so he had a completely different accent to everyone else anyway. I got the cast to stick to their own voices, because there naturally would have been that mix. Adrian McLoughlin, who plays Stalin, is a slightly posher cockney, so I asked him to just exaggerate his cockneyness a bit. When we showed it to a bunch of Russian journalists, they all said: “Thank God you didn’t get them to try Russian accents – we hate that.”’

Seeing great comic actors like Steve Buscemi, Jeffrey Tambor and Michael Palin all together is a treat, like a comic supergroup.
‘Yes, there was something very surreal in watching them all carry a coffin around. They all really bonded, actually. They still meet every month or so for dinner. Like a sort of politburo. Those that can’t make it send video messages.’

Were you daunted by dealing with a real period of history when millions died? ‘Definitely, yes. From the outset I knew we had to be very respectful of what happened, and also that the comedy and the feeling of terror should move along simultaneously. I was venturing outside of my comfort zone, by doing something that wasn’t necessarily funny the whole way through. And taking the audience out of their comfort zone too.’

The film was made before the last American election, but it’s still very timely, isn’t it?
‘Yes, it shouldn’t be seen as an allegory of Trump. It’s much more about how democracy and freedom don’t necessarily last for ever. My father, who fought in the Italian partisans [in WWII], didn’t take British citizenship, meaning he couldn’t vote. I asked him about it, he said: “The last election I remember, Mussolini got in.” So the film is a reminder that it doesn’t take much for world events to reach a critical threshold.’

How would Theresa May do in those negotiations after Stalin’s death?
‘I think she’d just end up negotiating with herself.’

The Death of Stalin is in cinemas now.

Read Time Out's review of 'The Death of Stalin' 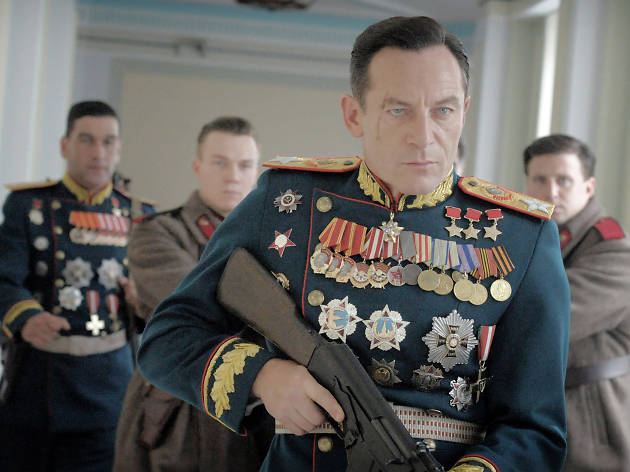 Like Orwell on helium, this reimagining of Stalin’s demise and the subsequent ideological gymnastics of his scheming acolytes is daring, quick-fire and appallingly funny.