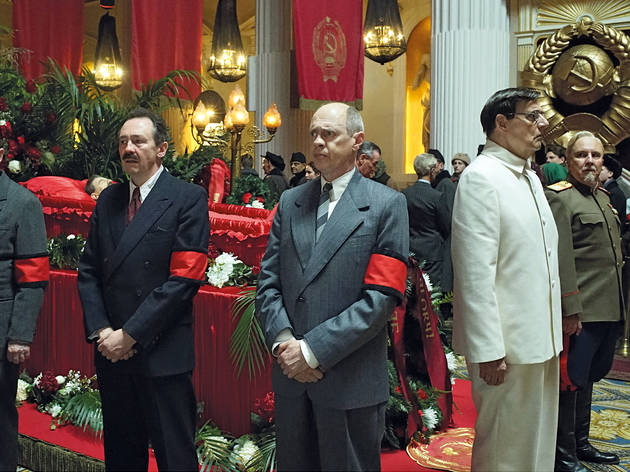 Armando Iannucci's lacerating, hilarious comedy lampoons Stalinist Russia to within an inch of its life.

Accepting the old adage about comedy being tragedy plus time, it still feels about half a century too soon to be mining the savage tyranny of Stalinism for gags. But writer-director Armando Iannucci (‘In the Loop’) has managed it – and then some – pulling off the most essential British comedy since ‘Four Lions’ in the process. Like Orwell on helium, this reimagining of Stalin’s demise and the subsequent ideological gymnastics of his scheming acolytes is daring, quick-fire and appallingly funny.

What follows is a riotous farce of doublespeak and plotting laced with moments of bitumen-black horror. Iannucci’s control of tone is such that we’re carried from hilarity to revulsion and back again in a few keenly crafted lines of dialogue. It’s much darker terrain than his comic dissections of US and British politics, ‘The Thick of It’ and ‘Veep’ – uncomfortably so at times. Beria, the Soviet system’s brutal id, scratches names off lists and rapes young girls he keeps in dungeons. He’s the primary villain in a film that’s overflowing with them, and Russell Beale brings oily glee to the role.

Delivering more bullocking menace is Jason Isaacs’s war hero Zhukov, who pitches up with a chest full of medals and a heap of juicy lines. (‘I fucked Germany. I think I can take a flesh lump in a waistcoat,’ he boasts.) But the real star here is the man behind the camera, who proves that he can tickle the funny bone one minute and cut right through it the next. To terms like ‘Pythonesque’, it may soon be time to add ‘Iannuccian’. The man is a master.