My Account My Profile Sign out
My Account
Search
Worldwide Europe United Kingdom England London Colin Farrell on Sacred Deer, Dumbo and his unusual use for Vaseline
Advertising

There are movies that can drag you out of the deepest funk; movies that feel like a big hug at the end of a tough week. Colin Farrell’s new film, ‘The Killing of a Sacred Deer’, is not one of them. ‘I was fucking depressed after we finished shooting,’ he says of his latest collaboration with ‘The Lobster’ director Yorgos Lanthimos. Splicing Greek myth with Lanthimos’s eerily off-kilter world, ‘Sacred Deer’ has an edge sharper than a surgeon’s scalpel. In it, Farrell plays a cardiologist whose family is threatened in the most terrifying way imaginable. It may not be the feelgood hit of the year, but it’s another canny pick by an actor doing some of the best work of his career. Shortly after Harvey Weinstein was brought low, he tells Time Out about another man paying for his sins.

I’m guessing ‘The Killing of a Sacred Deer’ isn’t one you’ll watch with your kids.

‘With the boys? No. [They’ve seen] very few of my films. “Fantastic Beasts” was actually the first time they could watch something, which was cool. They’ll be able to see [Tim Burton’s] “Dumbo”. This? No. So much of the shit I’ve done is dark and tonally heavy, and there’s all sorts of abuse [in it].’

How are you describing the film to people?

‘It’s about the ripples created by an event that takes place before the story starts. It’s like Paul Thomas Anderson says in “Magnolia”: “We may be through with the past but the past ain’t through with us.” As a result of my character’s arrogance or pride, this act comes back to haunt him. It’s a very heavy morality tale, for sure.’

With Harvey Weinstein in the news, it feels like an apt time to be talking about powerful men brought low by their sins.

Do you think Hollywood is finally starting to change?

‘Like every industry in the world, it’s been dominated by men for far too long. For absolutely no reason, the world has been a male-centric game for millennia and that’s shifting, as well it should. It’s long overdue.’

‘Sacred Deer’ was a tough shoot. What’s the first thing you did when you wrapped?

‘I shaved my beard off! If I hadn’t had another job lined up I would have loved to have gone away for a week and just slept and swam in the sea. Because it was such dark material, and because we shot in chronological order, there was this ever-enlarging sense of doom. [There was one day when] I arrived on set and there were two hospital beds and two drips. I literally stood there and went, “Oh, fuck.” I knew where the story was going and it was just getting sticky at that stage. But a bit of sleep and the kids will slap you out of your self-involvement quick enough.’

Lanthimos had you put on a pot belly for ‘The Lobster’. Was that uncomfortable?

‘Oh, absolutely. If I’d put the 45lbs on over a year I would have got used to my thighs getting mashed together, but I only had eight weeks. I got home one day, took my pants down and there were cuts down there. I had to wear Vaseline on my inside thighs. It slowed my speech and thought patterns down. It felt perfect for the character.’

You went straight from ‘Sacred Deer’ to ‘The Beguiled’, so a double dose of Nicole Kidman.

How was it filming that sponge bath scene with her in ‘The Beguiled’?

‘Yep, I haven’t been washed like that since I was a baby [laughs]. Thank God we had fun on this, because we literally had a hug and said, “See you in two weeks.”’

You mentioned ‘Dumbo’. How do you prepare to play a one-armed man who tends to baby elephants?

‘We use our imagination, darling! My character’s wife died while he was at war and his kids have been raised by the circus. Thematically, that sounds heavy as fuck, but it’s a Disney movie by Tim Burton so you’re not getting into it too deep.’

Did you work with any actual elephants?

‘No. Lots of tennis balls [for VFX shots]. The film is basically sponsored by Penn.’

‘The Killing of a Sacred Deer’ opens on Fri Nov 3.

Read Time Out's review of 'The Killing of a Sacred Deer' 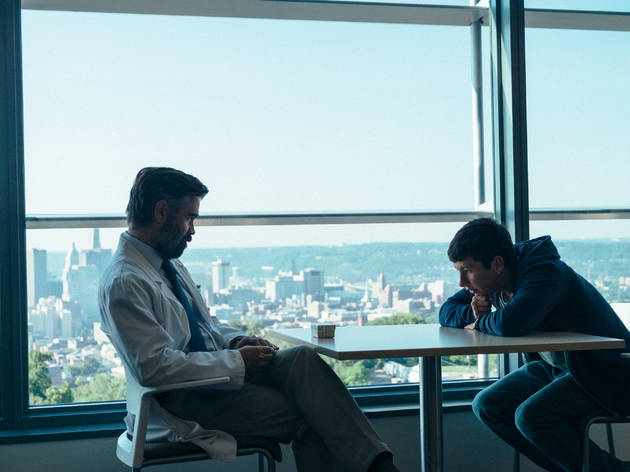