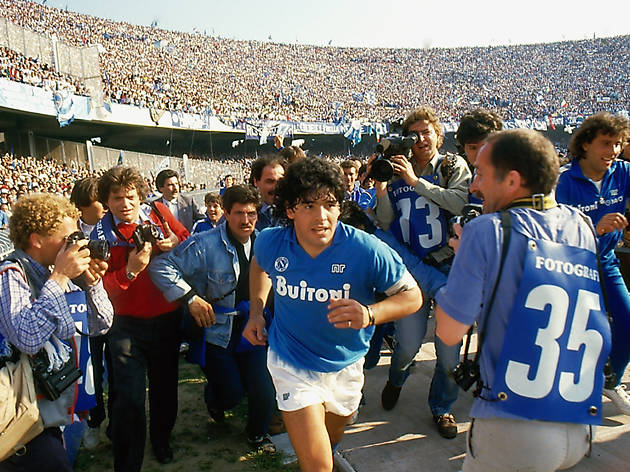 As mesmeric as its subject’s skills and as raw as his life off the pitch, Asif Kapadia’s latest is another doc of real class and insight.

Like an anatomist, you can pretty much break down Argentinian soccer superstar-turned-tabloid-villain Diego Maradona into his composite parts: the wand-like left foot, capable of conjuring magic in the tightest of corners; the stocky thighs and jutting chest, source of his explosive power on the pitch; the left hand that cheated England in the 1986 World Cup; and the nostrils through which passed industrial quantities of cocaine – even at the height of his footballing powers.

Director Asif Kapadia (‘Senna’, ‘Amy’) covers each of them in this spellbinding, empathetic documentary. He also brings to the fore a less obsessed-about piece of the Maradona anatomy: his heart. ‘Diego Maradona’ has the football and the drugs – think ‘Scarface’ with screamers – but it’s a surprisingly emotional ride too. In the spirit of all good docs, it’ll make you reappraise your feelings about the man and the myths around him.

Wisely, Kapadia keeps his focus tight, overlaying unseen interviews conducted with ex-teammates, girlfriends and journalists – as well as with the man himself, recorded at his home in Dubai – over endlessly compelling archive footage. Of course, there’s plenty of football: pitch-side footage captures his balletic qualities in artful slow motion. But there’s a lot more than football to a story bookmarked by a childhood as a ‘shitty little block kid’ in the slums of Buenos Aires and later-life struggles with addiction. But the meat of it charts his seven years in Naples, where he fled after an ill-fated spell at FC Barcelona. There, he helped turn Serie A strugglers Napoli into world beaters and himself into first a playboy, then an addict.

The film opens with what seems to be a Jason Bourne-like car chase but turns out to be his raucous journey to Napoli’s stadium to be introduced to his new fans. All 85,000 of them. The relationship between man and city – a febrile, combustible chemistry that would eventually blow up in the Argentinian’s face – offers a fascinating, sharp-edged subplot. There’s a sense of romance in this once-poor kid from the slums finding a city full of soulmates, and Napoli’s rise is a great sports story, but the film expertly communicates a sense of it all being too much: too much pressure, too much responsibility, too much adulation. The malign influence of the Camorra, Naples’ crime lords, is never far away either.

The footage Kapadia has unearthed is remarkable. We see the newly signed Diego entering his new stadium through its concrete catacombs, like a gladiator preparing for combat. Later, there’s home video of him delighting in defeating his girlfriend at tennis (‘I’ve won Wimbledon!’ he whoops). The picture is clear: he’s a man on the pitch, a wide-eyed child off it.

That boyishness, his passion for his chosen sport and an endearingly mischievous streak make him hard to dislike. He’s immature – his treatment of the women in his life is capricious to the point of cruelty – and wildly egotistical, but Kapadia teases the idea that the Atlas-like pressure on his shoulders contributed to his retreat into hedonism and drugs, without ever excusing his worst excesses.

If aspects of Maradona’s life feel slightly glossed over, in particular the son he initially refused to acknowledge, it’d be impossible to shoehorn this tumultuous life into a single film. Instead, Kapadia gives us a fevered, joyous, melancholy and sometimes toxic Neapolitan love story that presents the man in all his contradictions and complexity. He was the block kid who found a new home, but somehow lost his soul. What a way to complete a hat-trick of documentaries.