My Account My Profile Sign out
My Account
Search
Worldwide Europe United Kingdom England London 'Does Daniel use emojis? No, he's got a flip phone!' – Paul Thomas Anderson on 'Phantom Thread'
Advertising

The recipient of six Oscar nominations, ‘Phantom Thread’ pairs Daniel Day-Lewis’s Reynolds Woodcock – a vain, controlling couturier who hates noise at breakfast – with newcomer Vicky Krieps’s Alma, a strange, fearless life-force who couldn’t give a fig for his routines. Yet a strange infatuation flows like poison through the veins of Paul Thomas Anderson’s latest movie. Not quite as manicured as his latest alpha-male protagonist but still pretty dapper, the American auteur sips green tea and fill us in on the story behind his hypnotic tale and its Fitzrovia shoot.

This is your first film set or shot outside California. What came first: the idea or the location?
‘I’d been searching for something to do in the UK for a while. It’s inherently cinematic, particularly for a period piece. Initially, I thought we’d film [this] in Cornwall – Daphne du Maurier country. I don’t feel like I’m done here. My first idea was to do [an adaptation] of MR James, a Cambridge professor who’d write these great Christmas horror stories, and I may still revisit that.’

Is it true you had trouble with people having lunch in Fitzroy Square during the shoot?
‘Hollywood assholes that we are, we thought: Hang on! Can’t you guys take your lunchbreaks somewhere else? Actually, everyone on the square was really accommodating, with the exception of an American couple [laughs].’

It feels like a love letter to London, but it’s not full of recognisable landmarks.
‘It occupies a twilight fairytale land. The reality would have been a bit dingier, but there’s so much ground to cover that doing the wide establisher, title card “London, 1955”, well, we’ve fucking seen that enough. Without it, it feels more authentic.’

Woodcock does order lapsang souchong tea in a 1950s B&B. That felt like a stretch.
‘I will give you that. But, being an American, I will say that unfortunately English people still don’t know how to drink tea: which is iced and with lemon.’

Vicky Krieps is an incredible discovery. She has an unusual energy.
‘She gives good stare. You’re never quite sure where you stand. The scene where she sees a Reynolds dress being mistreated was one of the most fun days I’ve had shooting. You could see her temperature rising.’

Daniel Day-Lewis is remarkable, too. When the news came that he’d retired, there was a joke on Twitter that he was actually preparing to play a retired actor
‘[Laughs] Oh, that he was researching the role?’

Exactly. Do people get him wrong?
‘I would bet the thing people don’t see is just how damn funny he can be. He doesn’t have that reputation, but he’s a funny motherfucker. He’s sharp and you see it in his performance.’ 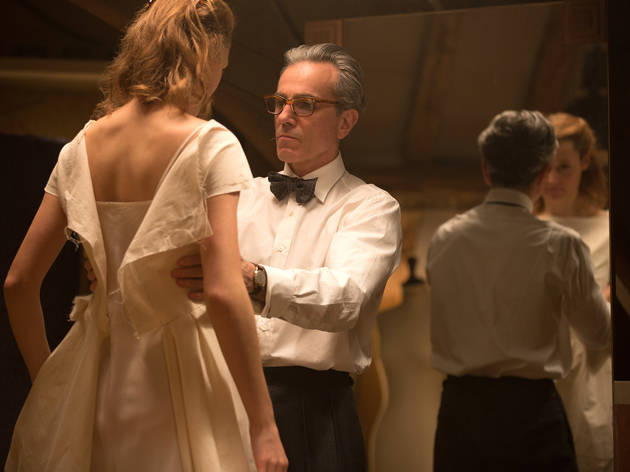 You talked about how your partner nursing you when you were ill helped inspire the story. Are there other personal parallels?
‘It certainly isn’t an accurate portrayal of my relationship, but I’d be lying if I said there were no parallels. You’re always asking yourself those questions: how are we going to make this work? How are we going to get through this? It’s funny, though, a disproportionate number of women come out and say, “I’m actually like Reynolds.” I’m always shocked by that.’

Men and women are reacting differently?
‘Completely. I think people like to identify with the characters’ breakfast habits. My sister... if there’s a noise at breakfast she will snap. I have four kids and breakfast is chaos, which is how I like it.’

‘Toxic masculinity’ is a phrase that’s cropped up about Reynolds. This idea of
a powerful man abusing his status.
‘Toxic masculinity is a very modern phrase, and you can apply it, but this is more like arrested development. His mother has treated him as the golden boy, but what happens when that boy grows up and he’s still acting like a child?’

Daniel said you had a great time texting each other with ideas before making the film, but then filming became quite sad.
‘Yeah. With a certain distance, fights you might have in a relationship can be quite amusing, but in the moment they’re no fun. We spent a lot of time mucking about in those combative scenes between [him and Vicky], but there were laughs too.’

I have to ask, does he use emojis?
‘No, he’s got a fucking flip phone. He knows what everything is, but he’s never been near an emoji in his life. He’s still going “J-K-L”, typing three letters to get to the “L”.’

'Phantom Thread' is in cinemas on Feb 2 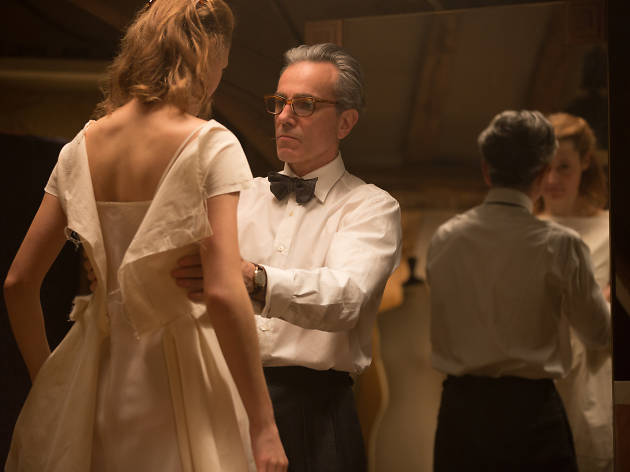 False gods strut through the movies of Paul Thomas Anderson: rapacious oilmen, well-endowed porn stars, inventors of new religions and spinners of old lies. ‘Phantom Thread’, the writer-director’s ultra-fascinating bad romance (powered by an uncommonly sophisticated script by Anderson himself), gives us a real god – or at least one who’s earned his perch. Reynolds Woodcock (Daniel Day-Lewis, greying, fastidious, never unpersuasive) rules his private corner of London’s 1950s haute fashion world. A dresser of wasp-waisted princesses, he pursues his craft in total concentration and near-complete silence. ‘There’s entirely too much movement at breakfast!’ Woodcock shouts with terrifying severity, an Anderson hallmark. When his character woos a lowly waitress, Alma (Vicky Krieps, purposefully blank), onto his tailoring pedestal to be his new lust object, you cringe on her behalf. What an absolute joy it is, then, to watch Alma slowly turn the tables on this insufferable creep. ‘Phantom Thread’ hides this development until it can no longer; its build-up is consumed with subtle flirtations, the thrill of driving fast in a sports car, the elegance of the clothes and the ritualisation of Woodcock turning bodies into consumable things. It’s almost a little too square and prestigey for the maker of ‘Inherent Vice’, but then Jonny Greenwood’s delicate piano score goes cello-heavy and the mood darkens into neediness – and worse. Anderson’s swing of the power pendulum represents his mos