When Eddie Redmayne first started acting professionally after Cambridge, he half expected to get a call from the Harry Potter casting agent. With a ginger tinge, he thought he might be in with a shot of playing a minor Weasley. ‘Sadly, it never happened!’ he says.

This is typical Redmayne. He has landed the role of a lifetime in ‘Fantastic Beasts and Where to Find Them’, JK Rowling’s new film set in the wizarding world of Harry Potter. The film’s producer says that he was the first and only choice to play magician Newt Scamander. And yet, here he is with a nice line in self-deprecating humour.

We meet at 9am at Claridge’s. It’s Redmayne’s first day back at work after paternity leave. His wife Hannah gave birth to their first child, Iris, in June. He says he’s knackered, but he’s bright-eyed and bushy-tailed, grinning ear to ear.

The 34-year-old Londoner has a lot to smile about. Last year he pocketed the Best Actor Oscar for his gorgeous portrayal of Stephen Hawking in ‘The Theory of Everything’. Now, he’s gone and bagged – or briefcased – the lead in ‘Fantastic Beasts’. JK Rowling has written the script (her first) for the film, which finds eccentric magician Newt arriving in 1920s New York with a case full of misbehaving magical creatures.

During the hour we spend chatting, the only time a cloud passes over Redmayne’s face is when he thinks he might have let slip something about ‘Fantastic Beasts’ he shouldn’t have (he hasn’t). He glances at the door as if heavies might appear and drag him off to JK Rowling’s basement to jam magic wands into his eyes as punishment. Even if they did, he’d melt them into puddles in two seconds flat.

You must be the only British actor never to have auditioned for a Harry Potter film.
‘I know. I never got an audition! Actually, that’s not entirely true. I did get one, when I was at university, to play Tom Riddle, the young Voldemort, but it wasn’t very successful.’

The producer says you were everyone’s first choice for Newt Scamander. Was it a good feeling not having to audition?
‘Yes. But with the thrill comes the paranoia that you’re going to get fired after day one. I was convinced I would lose the job. This is how neurotic actors work!’

You’ve said in the past that fear fuels you. Didn’t winning an Oscar help?
‘I think sometimes you say something in an interview and it becomes the story. But certainly fear is always there. It’s what makes you work harder. And, God, it feels lovely when someone gives you a prize, but it doesn’t blank out the things you would have done differently.’

Do you get nerves at work day to day?
‘I don’t in my general life, but at work I do, yeah. It’s quite helpful in some ways; there’s an edge that’s perhaps helpful to access emotion.’ 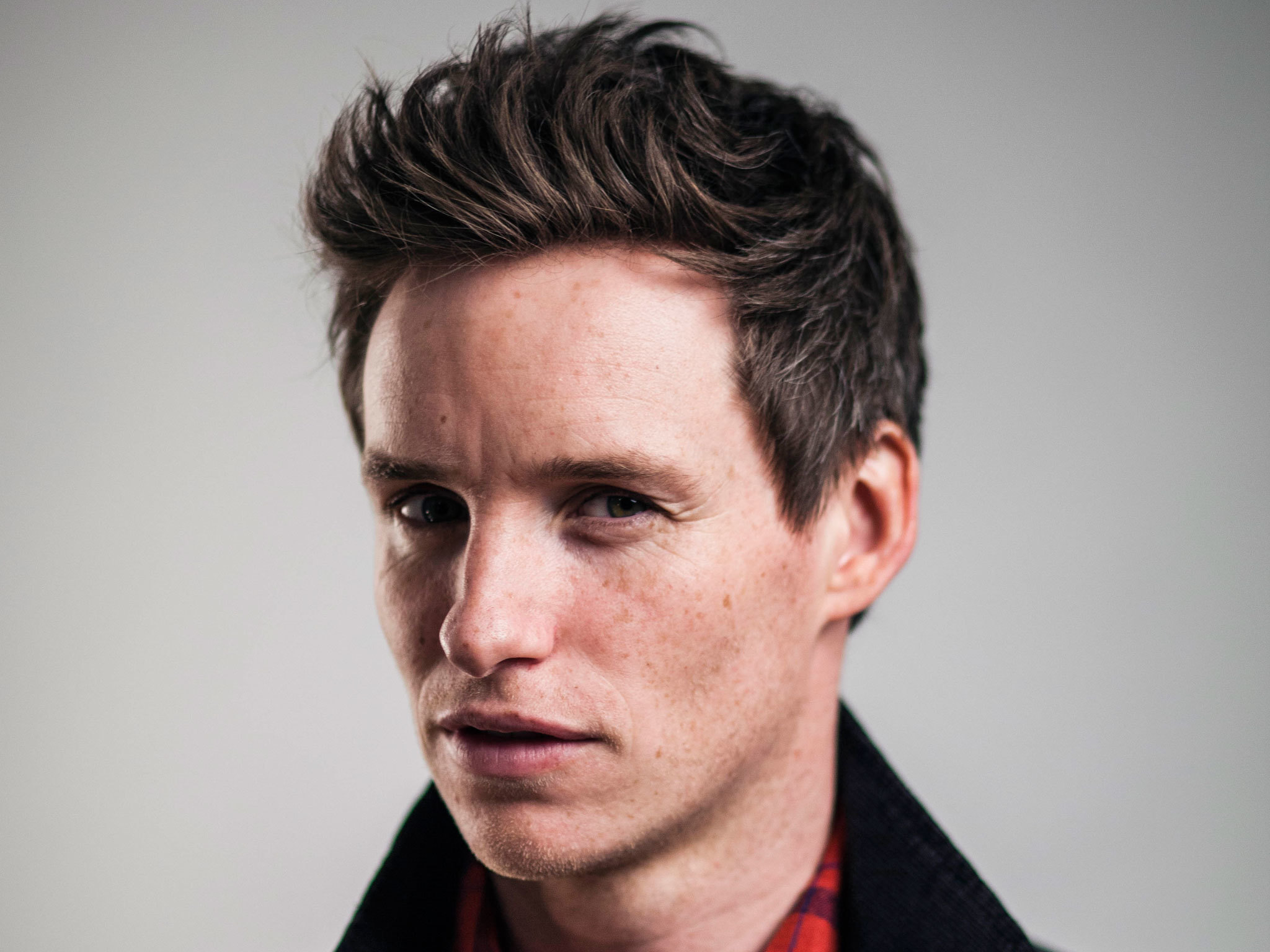 'I was convinced I would lose the job'

JK Rowling says her characters are outsiders. Is Newt Scamander an outsider? He likes his magical creatures more than he likes people.
‘Yes. What I love about him is that he is absolutely his own person. As a consequence, he can be quite prickly. At the beginning of the film he doesn’t care what people think of him. You see his heart through his relationship with his creatures. He’s also been damaged by relationships in the past. That’s something Jo and I talked about: he has many qualities to him that aren’t obviously heroic.’

Hufflepuff is JK Rowling’s favourite house. Have you done the sorting test?
‘I have and I’m a Hufflepuff. What’s interesting is that when I did the Patronus test, I did it twice, and ended up with a basset hound both times. The people from Pottermore were like “That’s impossible. There are 8 gazillion variations.” But I’m happy with a basset hound.’

Newt’s magical creatures were added during post-production. You worked on it with the same physical coach as you did on ‘The Theory of Everything’. Why?
‘I’m useless with green screen. I have a really shoddy imagination. And Newt’s relationships with the creatures are the heart of the film. So we spent months with puppeteers. I met the designers of the animals because they know the animals. I asked to have one on set: Pablo, who is 6' 5" and plays the little Niffler. Then sometimes we’d have almost “War Horse”-style puppets for the rehearsal. But it varied, and sometimes it just involved having little Pickett the Bowtruckle, who is a stick insect, and he would be on my hand. I’d be on the tube in London, imagining talking to this thing, and suddenly realise I’m being stared at.’

Do you still take the tube? Be honest!
‘Yes I take the tube! What’s the other option in London? This morning they sent a car and it took an hour to go half a mile to get here. On the tube, it would have taken ten minutes. I’m a bit of cyclist too, but my bike got nicked, right outside the front door. Not happy!’

Do people try and take sneaky photos of you with their phones on the tube?
‘There’s the odd surreptitious one, which is funny because you have this incredibly embarrassing thing: the flash goes off, you look up and they look, and then you have this awkward 40 seconds to the next stop.’

What was it like meeting JK Rowling for the first time?
‘It was a week before we started filming. I felt slightly embarrassed afterwards, because there wasn’t much polite chit-chat. She was only there for an hour and I had so many questions. We just went straight into Newt. I’ve played a couple of real people, and you have diaries and books. For Newt, it was the amazing encyclopaedia that is her brain.’

Newt was expelled from Hogwarts. What’s the worst thing you ever did at school?
‘Oh my God. Did I ever come close to being expelled? No. I wasn’t deeply rebellious.’

JK Rowling is such an impressive person. Her magical power is handling Twitter trolls.
‘She’s an extraordinary human being. I’m not on Twitter for many reasons, and one of them is thin-skinnedness. Jo is so eloquent and intelligent, undermining arguments. I admire that. It’s a great strength.’

The producer of ‘Fantastic Beasts’ says you’re good at playing outsiders. But that’s not you, is it? You seem totally at ease.
‘I don’t feel like an outsider, lifewise. I’m drawn to vulnerability. I’m interested in people willing to expose their vulnerability and their passion. That’s what I love about Newt – actually I find any human attractive if they are passionate about something, because it shows a great love.’

How good is your wand-waving?
‘The wand thing is hilarious. There is part of you that’s seven years old again when the director says “Choose your wand.” Then you feel like a fool, standing there with a stick in your hand. And there were injuries – wand wrist, wizard elbow…’

Wand wrist?
‘That was genuinely a thing! We were doing these huge wizard duels, throwing your arm around left, right and centre. Colin [Farrell] and I came in one day, and we said to each other: “Mate, is your arm a bit sore?” It’s a hazard.’

'The wand thing is hilarious. And there were injuries – wand wrist, wizard elbow…'

People always say you’re the nicest man they’ve worked with. Where does that nice-guy-at-work ethic come from?
‘I’m not sure they’d all say that! But I didn’t go to drama school, so when I started working, I wasn’t just watching other actors’ techniques, I watched how they behaved too. Some actors can behave appallingly and feel completely relaxed with the knowledge that the entire crew hate them. I can’t.’

You’re the only actor I’ve met who admits to reading reviews. Why?
‘Because I’m going to find out anyway. The idea of walking into the theatre thinking you’re doing a great job when the world is going “Er, no you’re not.” It makes you look like a tool!’

Did it upset you when a newspaper called you ‘Eddie Mundane’?
‘No! That was weird. It was the day after I got back from the Oscars and I was going to Sainsbury’s. They photographed me and called me “Eddie Mundane”.’

What would your family say is your most irritating habit?
‘My family is divided into people who are late and people who are on time. Half of my family would hate my punctuality. I’m hardcore. My wife is like “Really? We have to be at the airport three hours early?” ’

You met your wife when you were a teenager. Do you think it’s good having someone around who saw you as a spotty 15-year-old and won’t let you get too big for your boots?
‘It’s so weird, you don’t question those things. But it’s great that she found me attractive then and still does, through all the shit. That’s good! It’s also wonderful having a shared history and friends. Even though we didn’t get together for about 15 years. I won’t bore you with specifics!’

You’ve worked non-stop over the past few years. Has becoming a dad slowed you down? You’re just back from paternity leave.
‘By the end of “Fantastic Beasts” I was zonked. And Hannah was pregnant. So I’ve taken time off. Iris arrived and it’s been so lovely. It’s the first time I’ve taken time off properly.’

Did you learn anything about being a parent from Stephen Hawking and his first wife Jane in ‘The Theory of Everything’?
‘Reading Jane’s book was really interesting. She was helping to look after Stephen but also had young children. It’s the thing that no one knows until they have a kid, just how intense it is: this extraordinary love.’

Has being a dad changed how you see the world?
‘At the moment it’s so recent. We’re still at the stage of getting through the night, trying to keep our child alive. I don’t think I’ve got past the sleep deprivation yet to get to a point of having a more philosophical take! We’re just scrabbling through in the most wonderful way.’

What’s the best advice you’ve ever been given?
‘It’s a quote by Chekhov. I’m butchering this: “Take life step by step, slowly, slowly, and leave the competition to others.”’

‘Fantastic Beasts and Where to Find Them’ opens on Fri Nov 18. 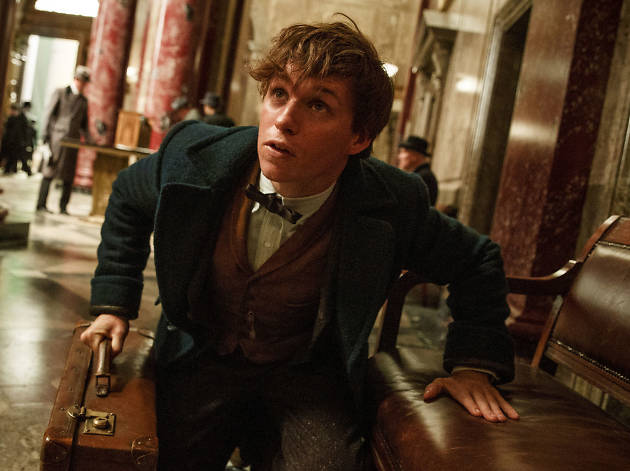 So Daniel Radcliffe isn't in it?