My Account My Profile Sign out
My Account
Search
Worldwide Europe United Kingdom England London Freida Pinto: ‘I would absolutely do a Bond film with Danny Boyle’
Advertising

Indian actress Freida Pinto is back on home turf in the film ‘Love Sonia’, a heartrending drama that goes places ‘Slumdog Millionaire’ only hinted at. She’s terrific as Rashmi, a charismatic, volatile woman who’s been sold into prostitution in Mumbai and is fighting to survive in a brothel. Raised in the same city, the 33-year-old speaks passionately about women’s rights: a fitting spokesperson for a film exposing international sex trafficking.

Your character in ‘Love Sonia’, Rashmi, is wonderfully complicated.
‘I love the word “complicated”. It’s easy to define characters as black or white and good or bad, but we’re all a combination of both. For women in the brothel, it’s survival of the fittest and sometimes that means making sure the other one doesn’t succeed. A lot of people are in situations like that.’

You’ve been involved in this project for a while, haven’t you?
‘Almost 11 years. I first came to know the director, Tabrez Noorani, when he was a producer on “Slumdog Millionaire”. Independent films take a really long time to finance – even longer if they have controversial subject matter.’

How do you look back on ‘Slumdog’?
‘It’s one of those fairy-tale films – the little engine that could. That film was made with unknown actors in a place where people didn’t think they could be on the world stage. Suddenly Bombay was on the map, the actors were on the map. Those were glorious moments.’

How do you feel about Danny Boyle directing the next Bond movie?
‘Super excited. Though Danny’s films always end on a hopeful note, so I immediately wondered how he’d end his Bond film. Would I do one with him? Absolutely. I really love what he did for Kelly Macdonald, and me, and Rosario [Dawson] in “Trance” – giving us these strong female characters. I can’t wait to see how the female characters shape up.’

Can we finally do away with the term ‘Bond Girls’?
‘Why not? I feel like it’s on the way out. Every decade comes with its phase: now we are truly in the Time’s Up and #MeToo phase. Knowing Danny, it’ll be true to the phase that we’re in now.’

What’s the worst audition you’ve ever had?
‘I had one with Will Smith in New York, and you know how loud and chaotic it can be there. I was so nervous – there were all these execs around the table – and all I could focus on was the sirens. I walked out feeling like a fool, though I could laugh about it a couple of years later.’

When you come to London, what’s the first thing you do?
‘I know this is so clichéd, but I have got to go to Dishoom. India is really far away, and if I can get close to it in any way it’s probably at Dishoom.’ 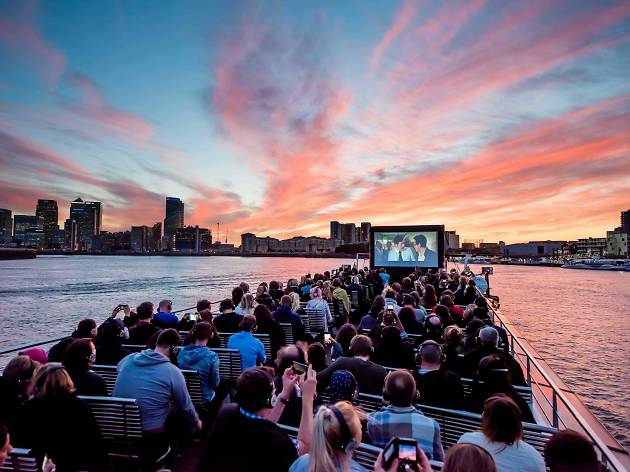 London’s notorious temperamental and unexpected weather doesn’t necessarily conjure images of people luxuriating on a warm evening enjoying outdoor cinema. Usually, even in the summer months, we’re battered with rain and wind, making any sort of outside activity from festivals to fêtes an umbrella-essential excursion. When we are gifted with some good weather over the summer, it’s worth taking full advantage off. And on a balmy London evening, nothing beats watching a movie under the stars. Whether you want to shriek-along to ‘The Shining’ in a graveyard or catch a romcom in a gorgeous Royal Park or palace, add outdoor cinema to your fair-weather bucket list. Recommended: London and UK cinema listings, film reviews and exclusive interviews