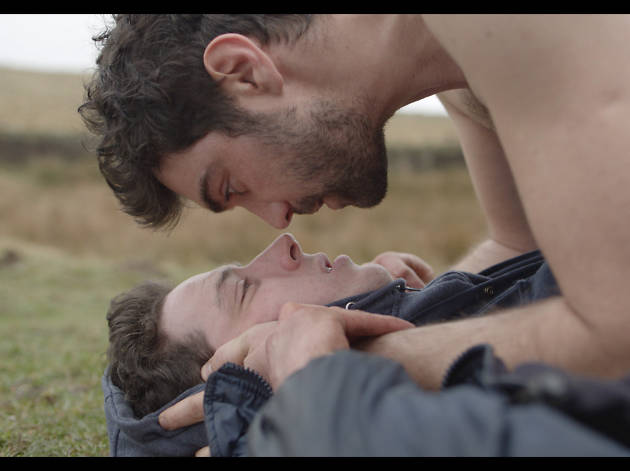 Sex, sheep, silences and small steps towards a happier life define this confident and authentic-feeling British indie debut. ‘God’s Own Country’ tells of a young farmer’s romantic awakening on the windswept Yorkshire Moors. But man-of-a-few-grunts Johnny (Josh O’Connor, a terrific performance) is not a happy soul. He lives a life of tension with his sick dad (Ian Hart) and solid, housekeeping gran (Gemma Jones), and struggles to keep the family farm going while binge-drinking at night and grabbing the odd sexual encounter with other men, without addressing at home or even within himself that he’s gay.

Change comes, gradually, with the arrival of Gheorghe (Alec Secareanu), a robust and dashing migrant worker from Romania who arrives to help during lambing season. ‘Are you half-Paki?’ asks Johnny, before tagging him a ‘gypo’ and playing out that age-old ritual of aggression preceding something more tender and, perhaps, lasting. There’s an earthy, unembarrassed sex scene in the mud, turning the idea of a coy roll in the hay into something much more raw and real. What threatens to be a story of perpetual misery begins to feel like one of hope.

Writer-director Francis Lee has drawn on his own farming background and his film is full of convincing detail. The lack of chat feels especially truthful. This is a world of few words, although there’s a very moving conversation towards the end between Johnny and his dad. It’s a gently romantic film, but it’s never pretty. It unfolds under grey, blustery spring skies; as lambs emerge blinking and unsteady into the world, so too does this young man’s nervous, raw sexuality.

God's own Country is a simple love story. A gritty, realistic, unsentimental love story. It is set in surroundings that are bleak and that sometimes seem hopeless. It is peopled with characters whose lives reflect that environment.

It is not an easy watch, Francis Lee, the director, has chosen not to airbrush the harsh realities of farm life on the Yorkshire moors, so there are scenes of birth, death, blood and gore. The characters, too, are brutally honest, one wonders why Gheorghe, falls for the racist, self-hating Johnny. We do see that Johnny also has his tender side, such as when he bathes his father, wonderfully played by Ian Hart, after he has had his second stroke.

However, sometimes the diamond shines all the brighter for being in a rougher environment, and that is certainly the case here. It is a very simple love story made sweeter by being found in such a hopeless place.

Currently my favourite film of 2017. Many are describing it as 'Brokeback in the Dales' - a description which does not do it justice. This is British cinema at it's finest, a moving, warm, kind tale. It's about falling in love, how scary it can be to let your guard down to let somebody in. Just beautiful.

Just want to say I love all of you who are involved in making this film ... Incredible and I hope God's Own Country 2

This is the best British cinema for a very long time. A stunning debut by writer and director Francis Lee. Lee shows us with a lot of tenderness how the harsh, gritty, alienating macho word of Yorkshire farm can form a lonely, tough and stoic brat Johnny Saxby. Initially you want to slap him at every turn.

The landscape was stunning and even more incredible was how natural the two main characters Johnny and Gheorghe were portrayed as seasoned farmers. Lee sent them both for a bootcamp at two different farms for two weeks before the shooting of them film. There's no *double* for the film - each part were done by the remarkable cast.

Ultimately God's Own Country is a beautiful and tender love story. The contrast between Johnny who felt trapped in the harsh Yorkshire but refused to see or unable to see beyond his own small world how his farm is disintergrating and he is  unable to manage it alone.

Johnny is also unable to articulate his feelings and unable to let anyone in his life. All he does is get drunk and all his liaisons were short, brutal and crass. He told a lover who asked him for a drink, "what we?" There is no *we* or *us* in JOhnny's world. He hated Gheorghe on sight and immediately insult him and call him gypsy and refused to see how he can contribute.

Johnny fell in love, got scared and initially failed to navigate his feelings.... and how he recognize what he has to do and let others and save his farm at the same time.