My Account My Profile Sign out
My Account
Search
Worldwide Europe United Kingdom England London Jeff Goldblum: ‘What do people quote at me? “That is one big pile of shit!”’
Advertising

Interviewing Jeff Goldblum is a singular experience. Sipping herbal tea, he’s musing distractedly on which of his films he’ll show his sons, Charlie (nearly three) and River (one), when they’re old enough. Maybe a ‘Jurassic Park’ movie, the dino franchise he’s returned to for a third time with ‘Fallen Kingdom’? Or ‘Thor: Ragnarok’, in which they’ll see him hamming it up gleefully as space scoundrel the Grandmaster? Nope. ‘“Death Wish”,’ he suggests. ‘Or “Adam Resurrected”, the Holocaust movie.’ A trademark twinkle lets me know he’s not entirely serious. Well, at least they’d be spared the sight of their dad turning into a giant hairy bug in ‘The Fly’. That can really scar a kid.

Goldblum, 65, has worked with the likes of Steven Spielberg, David Cronenberg and Robert Altman over his 44-year career, so there’ll be a few to pick from. Watchable even in unwatchable dross (hello again, ‘Death Wish’), a source of some of the most glorious memes to have graced the internet, and with a brain that seems to have switched to an awesome new shuffle mode, he’s graduated from cult hero to fully fledged international treasure. He’s got a rep for being unfailing charming, too. Surely he must have some bugbears, I ask him. ‘“Bugbears”? I like that!’ he grins, heading epically off-piste. ‘I should have called one of my children “Bugbear Goldblum”. You know, I’m an amiable sort but I have the gift of fury and temperament and quick impulse, and it’s available to me when I work. I know acting is a childlike endeavour but it’s no license to be childish.’ He blows through his nostrils in a seriously unconvincing display of Goldblum rage, before relaxing back into amiable Jeff.

Life, it’s fair to say, is pretty good for the Pittsburgh native. He stole the show in last year’s ‘Thor’ outing, teamed up again with Wes Anderson for ‘Isle of Dogs’ and has a flamboyantly villainous turn in sci-fi flick ‘Hotel Artemis’ coming up. To top it all, he’s about to release a jazz album – playing the piano is his other major passion. He’s a doting dad, too. He takes his iPhone out to show me a video of his one-year-old at the piano back home. ‘So, um, here goes… he’s not Mozart but he’s moving his fingers a little bit,’ he says, proudly.

With ‘Jurassic World: Fallen Kingdom’ he’s back as everyone’s favourite doomsayer, Dr Ian Malcolm. It’s not a big role – he filmed it in a day – and there’ll be no open-shirted sexiness this time, but it’s still a homecoming of sorts. He’s been away from the franchise for 21 years, but to him it feels like no time at all. ‘People always quote “Jurassic Park” to me,’ he says with a grin. ‘It’s usually “Life finds a way” or “That is one big pile of shit”. Sometimes they’ll take a glass of water and dribble it on my hand to recreate the scene with Laura Dern. And I do! I’m a good sport.’ 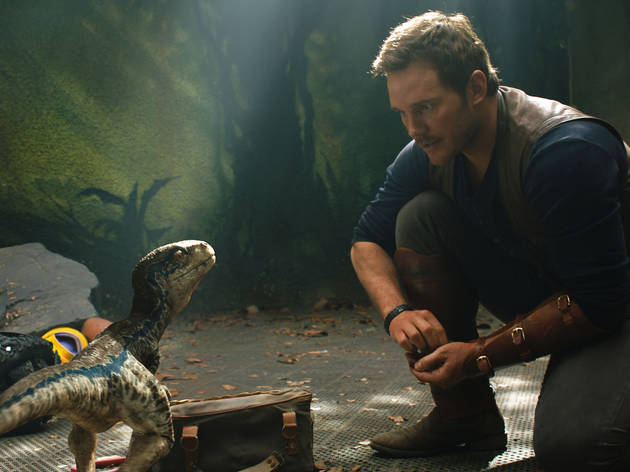