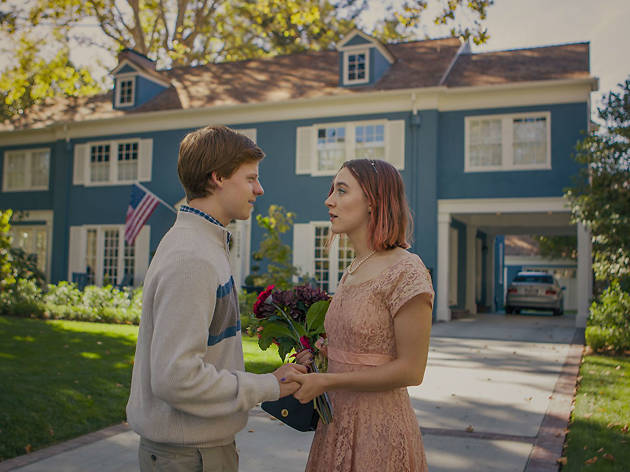 A sweet, deeply personal portrayal of female adolescence that’s more attuned to the bonds between girlfriends than casual flings with boys, writer-director Greta Gerwig’s beautiful 'Lady Bird' flutters with the attractively loose rhythms of youth. Anchored by an expressive mother-daughter story in which unconditional love and enmity often seem one and the same, and elevated by an entrancing Saoirse Ronan (easily among the best and most intimate actors of her generation), Gerwig’s accomplished second directorial effort makes you wish she’d spend more time behind the camera. With her keen ear for female familiarity (she co-wrote 'Frances Ha' and 'Mistress America'), Gerwig sets 'Lady Bird' during that exhilarating, confusing period known as high school senior year, when childhood-defining friendships start slipping away, hormones begin calling the shots and a better existence seems to await elsewhere.

We follow the rebellious, opinionated Christine 'Lady Bird' McPherson (Ronan, vanishing inside her funky, disorderly character) as she completes her final year of Catholic school in 2002. This is right after 9/11, during the Iraq War (often referenced in the background) and before cell phones got smart, further complicating teenagers’ lives. 'Lady Bird' spends her days quarreling with her equally strong-willed mother, Marion (Laurie Metcalf, invincible), slacking off with her good-natured best friend, Julie (a pitch-perfect Beanie Feldstein), and dreaming of a liberal East Coast college, away from her sleepy hometown of Sacramento (the 'Midwest of California,' as she puts it). But Lady Bird’s plans prove to be at odds with her middle-class family’s financial struggles, compassionately represented throughout, especially after her father, Larry (a low-key, gentle Tracy Letts), loses his job.

Joining the ranks of 'The Diary of a Teenage Girl' and 'The Edge of Seventeen' as a refreshing woman-centered coming-of-age film (and offering more depth than either), 'Lady Bird' captures a recent era with precision and a hint of nostalgia that’s not distracting: clunky flip phones and 'Cry Me a River' blend right in. Thoughtful and generous, it’s that rare ensemble film that gives its side characters enough room to breathe and grow: Two romantic interests – played by Lucas Hedges and Timothée Chalamet, both superb –as well as an upbeat nun (the legendary Lois Smith) stand out in this loving ode to mothers, daughters and the girlhood towns we never fully leave behind.

What a simple, short, yet beautiful film! It displays teenage angst and mother-daughter relationships perfectly. Saoirse Ronan is a fantastic actress and shows us many sides to the complex character of Ladybird. This film will leave you feeling warm inside.

Even though I am definitely not the target audience for Lady Bird, I can fully understand why so many people love it. It's charming, feels honest, and is really beautiful aesthetically. Definitely one to see if you're feeling whimsical.

A lovely, thoughtful, coming-of-age movie that also serves as a bit of a love letter to Sacramento. Ronan and Metcalf are phenomenal with the fraught relationship between mother and daughter being the backbone of the story and a mesmerising one at that. Special mention to Hedges and Chalamet as her boyfriends who play more complex than usual teenage loves/crushes

Nothing ground-breaking, but an interesting story about the challenging relationship between mother and daughter. This movie resonated for me and stayed with me for days after. The challenges of being a teenager, and the changes that the mother/daughter relationship goes through at that time, were portrayed brilliantly. The acting was excellent and the script was thought-provoking and real.

Christine doesn't like her name, she doesn't like where she lives and she doesn't much like family life. She re-brands herself as Lady Bird, goes all out to get into a college far from her home and spends time out of her house with real friends, boyfriends and newly acquired quasi friends. Except that after all her seeming-rebelliousness, Lady Bird finds she does like her name, boyfriends who have other leanings are really not boyfriends at all and the truest friends are those who have always been there for you.

Director-writer Greta Gerwig does an excellent job in both areas. Saoirse Ronan sensitively portrays seventeen year old Christine 'Lady Bird' McPherson who alternates between fighting back with her rather jaded mother at every conceivable opportunity and occasionally asking motherly advice like, "When is a good time to have sex? "

The family dynamics are strong. Lady Bird knows what she wants and seems to know how to get it. This is so much better than an average coming-of-age film.

This is a convincing and emotionally honest film about a specific kind of adolescence: bratty, confused, middle-middle class, white, female, pretentious, and ultimately kindhearted.