It’s a soaring sci-fi epic, scoring a pile of five-star reviews and on track to become the biggest box-office smash of all time. But ‘Star Wars: The Force Awakens’ is just the first in a new trilogy of films, and there’s plenty in the movie that doesn’t quite add up. We’ll give the filmmakers the benefit of the doubt and assume that these are tantalising teasers rather than glaring plot holes – but here are nine questions our resident Star Wars encyclopaedia Tom Huddleston demands answers to. 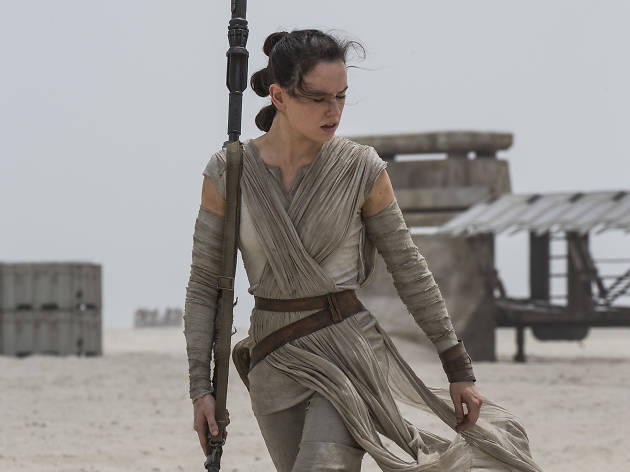 There was one late-in-the-day teaser trailer, featuring a voiceover from Lupita N’yongo’s cosmic crone Maz Kanata, which firmly implied that new franchise frontwoman Rey was the latest scion of the Skywalker clan. But while ‘The Force Awakens’ is quick to establish the backstory of villain Kylo Ren, aka Ben Solo-Skywalker (I'm unsure of the exact marital traditions in this corner of the galaxy), Rey’s lineage remains obscure. Was producer Kathleen Kennedy leaving a false trail when she said that twins might run in the Skywalker family? Is Rey in fact Luke’s daughter, and if so, by who? Or are the far-out theorists who link her back to Obi-Wan Kenobi not so wrongheaded?

I’m still inclined to think that Rey is Kylo’s sister, and that perhaps she was hidden away because his tendency towards evil was already showing itself and he had become a threat to her. It doesn’t explain why she’s so good with the Force despite zero training, but I’m sure all will become clear when the time is right. 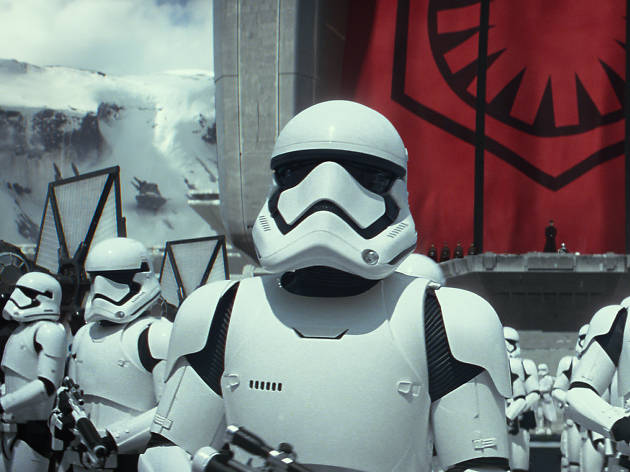 My major beef with ‘The Force Awakens’ was its fuzzy treatment of new bad guys The First Order. The individual characters were great, especially Adam Driver’s petulant, unpredictable adolescent nutjob Kylo. But what is their chief intent, beyond blowing up planets and being generally unpleasant? Do they have a home base (not the DIY shop), or are they just evil intergalactic drifters? And most importantly, is Supreme Leader Snoke really that big, or is he pulling a Wizard of Oz trick?

The first ‘Star Wars’ movie contained that great Evil Boardroom scene, in which a bunch of green-suited middle-management types explained exactly who the Empire were and what their final aim was – total galactic domination. Here we’re kept in the dark, and it’s frustrating. 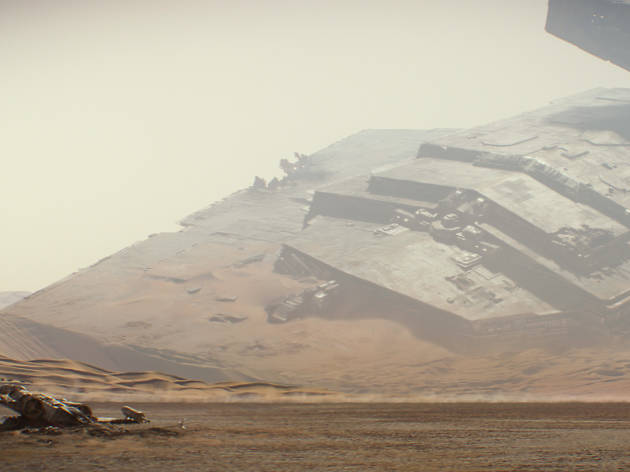 The first line spoken in 'The Force Awakens' is 'this will begin to make things right.' But say what you like about George Lucas’s prequel trilogy – and anyone who writes a word about the new movie seems compelled to deride them at tedious length – they expanded the ‘Star Wars universe enormously, adding new worlds, giving the galaxy a centre (the city-planet of Coruscant) and a social and political structure which the original trilogy had only hinted at. Are the new movies going to pretend that none of that existed – or that it has no relevance to the world of 50 years later?

In this writer’s opinion there were plenty of great ideas in the prequel trilogy – and in the ‘Clone Wars’ cartoon series – even if the treatment of them often left a lot to be desired. It’d be a crying shame to see all that hard work chucked out just to placate the snarling, trolling lowest-common-denominator fanboys. 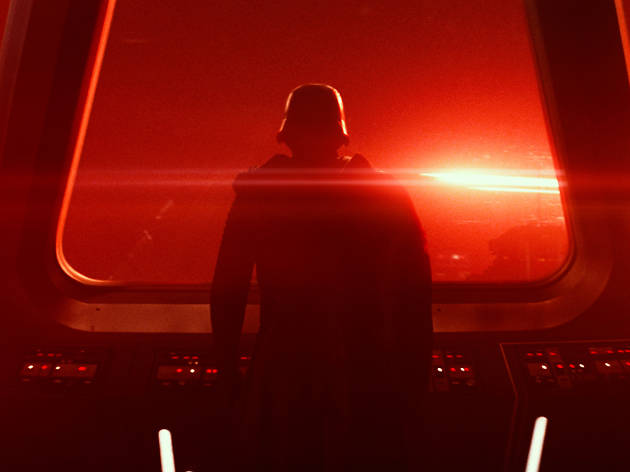 Despite apparently ditching many of the ideas developed in the prequels, we are treated to a fleeting mention of ‘The New Republic’, and even shown one of their worlds in the seconds before it’s destroyed by the First Order. So is that the end for The New Republic? Who are (or were) they? Why weren’t they taking on The First Order directly, rather than covertly funding General Leia’s Resistance? And shouldn’t the audience have been asked to care, if only a little bit, about the destruction of four planets (all of which seemed to be weirdly close to one another – one more unexplained coincidence).

I have no doubt that most of these issues will be ironed out in films to come, but the handling of them in ‘The Force Awakens’ is a bit clumsy – spelling this information out simply and clearly would’ve given us a better idea of the stakes, deepening our connection to the world and the characters. 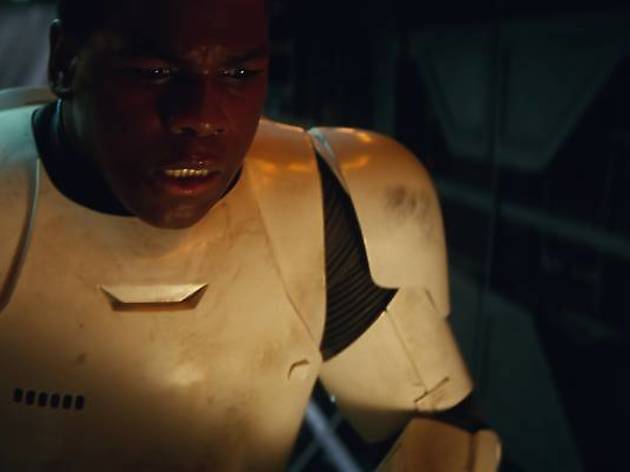 One of the great joys of ‘The Force Awakens’ is John Boyega’s performance as Finn, the child soldier snatched from his home planet and raised to be a soldier for the First Order. Some have complained that his switch to the good side was a touch convenient, but I loved it: no fuss, no fretting, we were just thrown right in there with FN-2187 as his life changes forever.

This idea of a slave warrior was smartly intended to echo real-life third world armies, in which children are stolen and trained to fight. But it also put in mind the nameless, kidnapped and castrated Unsullied soldiers in ‘Game of Thrones’, leading to the inevitable question… is Finn ‘intact’? Actually, on second thoughts, this is one question I’m okay not knowing the answer to. 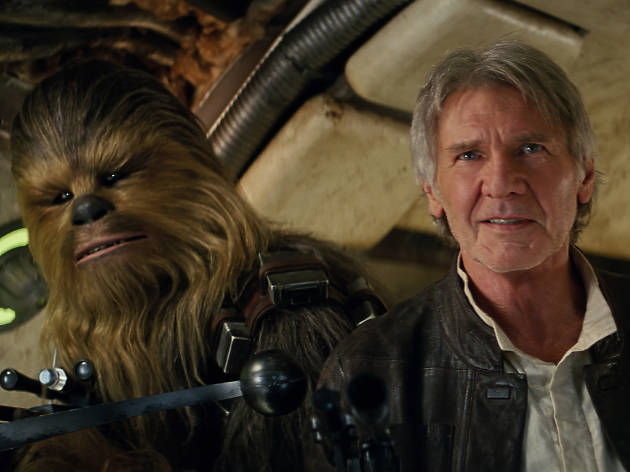 It’s hard to get a handle on how far away from each other the events of ‘The Force Awakens’ take place: it never seems to take any time for anyone to get anywhere (unlike in, say, ‘Star Wars’, when there was plenty of time for Jedi training on the way to Alderaan). For example, the Millennium Falcon is barely airborne from Jakku when it’s picked up by Han and Chewbacca, muttering something about tracking the ship’s signature and paving the way for the entire rest of the movie to happen.

Maybe Han does have some device that allows him to lock on to a ship and find it right away, anywhere in the galaxy. Or maybe he just happened to be passing Jakku, and there it was. But it really doesn’t make a whole lot of sense. 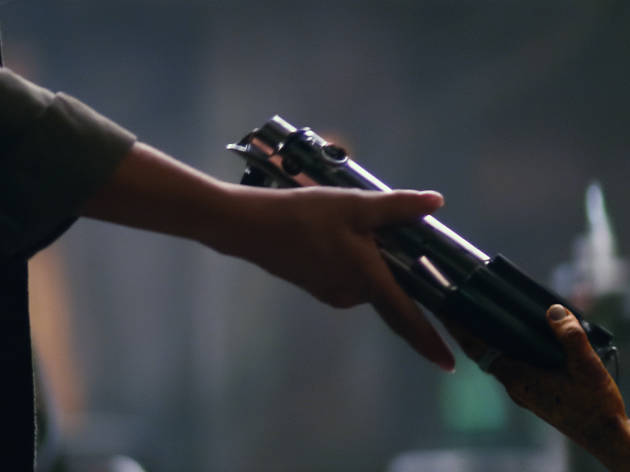 In ‘The Empire Strikes Back’, Luke loses Anakin’s lightsaber when his hand is unceremoniously lopped off, and it’s presumed lost either in the bowels of Cloud City or in the gaseous planet below. But in ‘The Force Awakens’ here it is, good as new and being handed to Rey by Maz Kanata (in an act that might – might – signify that the girl is indeed Luke’s child). Maz is close-mouthed about where she got it, muttering something about that being a story for another time.

But we really hope there’s a good answer forthcoming – if this gets explained away with some kind of weak ‘well this buddy of mine was just rooting around in the Cloud City tunnels one day and guess what?’, we’ll be mightily narked. 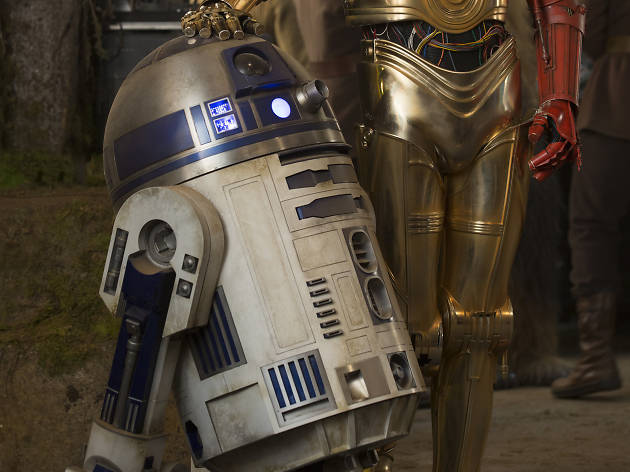 Right at the end of the movie, after the gang have been hunting for the missing parts of the map to find Luke Skywalker, R2-D2 wakes up and reveals, in a moment of blinding convenience, that he had it all along! He was just asleep (or depressed) and didn’t feel like handing it over. A fellow Time Out employee has theorised that Artoo responds to Rey’s voice – that he knows her from childhood, and it’s her dulcet tones that wake him from his robotic torpor.

Actually, director JJ Abrams and original writer Michael Arndt have come forward on this one, saying that Artoo got the map from the Death Star computer back in ‘Star Wars’, wakes up because he hears BB8’s voice in the middle of the movie but only wakes up at the end because… well they’re still pretty vague on that point. Either way, I’m not super convinced. 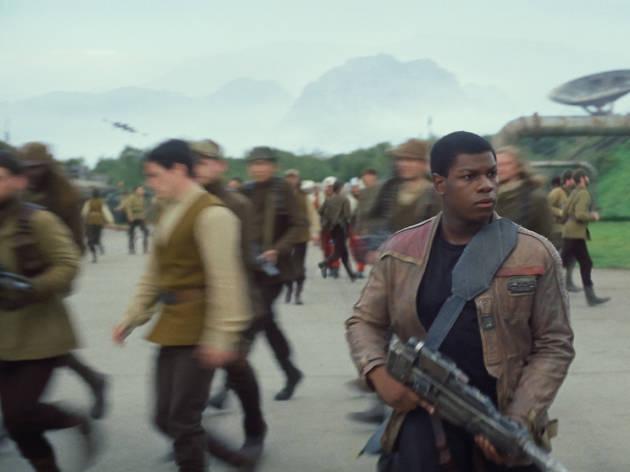 For all the flaws in ‘The Force Awakens’ – which were, let’s face it, massively outweighed by its enormous sense of fun, adventure and old-school derring-do – we at Time Out are already getting primed for Episode VIII, to be directed by Rian Johnson (whose body of work we’re more fond of than JJ’s, overall). So what should we expect? It’s actually rather hard to say, without knowing exactly what the bad guys want (see point 2), and what the galactic situation is (see point 4).

But we can hazard a few guesses nonetheless. Rey will train with Luke, as Chewie sits on his hands like Artoo on Dagobah (though how awesome would it be if he joined in and we ended up with a Wookiee Jedi?). Finn will wake up and join with Poe and Leia to continue the fight against the First Order. The two teams will be kept apart by circumstance, and a lot will go horribly wrong (this’ll be the ‘dark’ one, after all). But by the end, Luke will have returned to the Resistance fold, and will promise his sister that he’ll bring Kylo back from the Dark Side, rather than kill him. Oh, and a whole bunch of stuff will blow up. 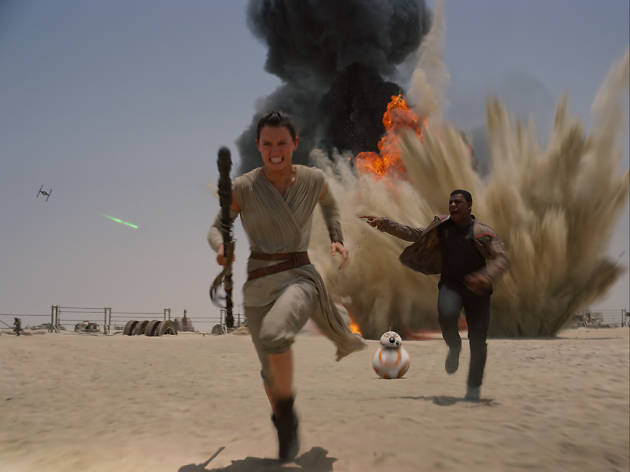 'Star Wars' is back. For the next six years – and probably beyond – Disney and Lucasfilm will unleash one new 'Star Wars' flick every twelve months, and we'll be in the front row for all of them. On our 'Star Wars' page you can read the latest news and gossip alongside reviews of the new movies (first up, Star Wars: The Force Awakens, released on December 18), interviews with the stars and much more.