My Account My Profile Sign out
My Account
Search
Worldwide Europe United Kingdom England London Pedro Almodóvar interview: 'Sex is one of the great gifts'
Advertising

Never has switching my phone to ‘airplane mode’ before an interview felt so appropriate. Spanish director Pedro Almodóvar’s new film, ‘I’m So Excited’, is an airborne farce: a highly strung comic melodrama bordering on panto, about a planeload of passengers circling 10,000ft above Spain during a technical failure.

Three gay stewards drug the economy-class passengers and get high themselves. At one point, this camp trio break out into a dance routine and sing the tune by The Pointer Sisters that gives the film its name. Meanwhile, the married pilot is having it off with a male steward behind his wife’s back and the business-class section is a rogue’s gallery of corruption, desperation and deception.

The film is short, sharp and saucy. It’s silly, yes, but not without serious things to say about modern Spain, despite the distracting chaos of a story overflowing with sex, drink and drugs.

After more than 30 years in the director’s chair, 63-year-old Almodóvar is now a byword for stylish and subversive filmmaking. Since he started making his punkish, anarchic films in the early 1980s, he has given us extremity and outrage while nearly always offering warmth and humour at the same time.

Lately, films including 2004’s ‘Bad Education’, 2006’s ‘Volver’ and 2009’s ‘Broken Embraces’ have shown a darker, less colourful side of this gay filmmaker, who has near-singlehandedly built the reputation of Spanish cinema around the world. ‘I’m So Excited’ harks back to the more frenetic, more madly comic films – like 1988’s ‘Women on the Verge of a Nervous Breakdown’ – that kickstarted his career.

Your last two films, ‘The Skin I Live In’ and ‘Broken Embraces’ were quite morbid and reflective. Why the change of tone?

‘I’ve wanted to make another comedy for a while now, and I had this idea back when I was making “Broken Embraces” in 2009. But I live with my stories for a long time. Also, at the moment, Spain is living through the worst moment since democracy was established. I like the idea that the audience will go and see the film and feel better when they come out than they did when they went in.’

Were you curious to see if you could still make this sort of film?

‘What I wanted to do was rediscover the tone of those early films. Maybe I was really trying to recapture my youth? I’m 33 years older than when I started. I wanted to see if that tone which characterised me in the ’80s was still there. There’s always been a lot of humour in my films, but I hadn’t done a pure comedy since “Women on the Verge of a Nervous Breakdown”. I do think I was able to write with the lightness of that era. That doesn’t mean my next films are going to be like this one. The ones I’m working on as possible future projects are very, very different.’

‘I’m So Excited’ is light and frothy, but you’ve also said that it reflects the difficult political and economic reality in Spain today. How?

‘It’s a metaphor for Spanish society right now. These people on the plane go round in circles. They don’t know when they’re going to land. They know it’s going to be an emergency landing and it’s going to be dangerous. There’s uncertainty and fear. That represents the moment we’re living in. But it’s a comedy. Everything finishes well. In reality, we don’t know how it’s going to finish.’

Much of the film exists in a state of heightened sexual arousal within this claustrophobic plane cabin. Is sex the ultimate escape from a dark reality in your story?

‘When I wrote the film, it had a taste of the way I wrote my first films in the early ’80s. The film is a homage to the early 1980s in Spain. It was a moment of real freedom of expression, with a new democracy, and there was huge promiscuity in the best sense of the word, in terms of drugs, sex and freedom.’

Do you think Spain is in a similar period of upheaval as it was when you started during the 1980s, during the cultural thaw of ‘la movida’ (the movement) after the long rule of General Franco and fascism?

‘Yes, but the upheaval now is for the worse. The films I made in the early ’80s, they would be much more scandalous now than they were at that time. This new film was scandalous too – not that I was conscious of that when I was writing it. Now is a time in Spain when things are closing in, not opening up.’

Have some people in Spain found ‘I’m So Excited’ scandalous then?

‘Also, people have reacted against the film because I’ve turned the catastrophe in Spain into a party. But in terms of sexuality, nothing is seen. People just talk about sex in an explicit way. It’s candid, but there’s no explicit sex. There’s something, too, in the story that disturbs heterosexuals who at some time have had a homosexual fantasy.’
You’re talking about the pilot in your film who is having an affair with a male steward. Do you think some people find it difficult that you show repressed homosexuality?

‘I’m dealing with bisexuality. Nobody really talks about bisexuality, but it’s much more common than we think… But I’m beginning to sound like the film is making people uncomfortable all over the place, and it’s not! It’s doing really well in Spain even though cinema is not very successful generally. The market has reached a new low. But let’s not talk about tragedies!’

There’s a lot of medicating and self-medicating in the film. You knock out the whole economy class section, and everyone in business class is off their heads.

‘My intention with economy class was to show subliminally an abuse of power on the part of those in charge, the pilots. So once they’ve given them the medication, they’re trying to silence an entire class. Nobody’s going to come and annoy them.

‘In business class on planes, which is where I travel and where I live, auto-medicating is a way of life. It’s what people do! Here, the stewards drug the business-class passengers with a Valencian cocktail, which is a real cocktail and very popular. It’s a mix of alcohol, juice and mescaline, and it was around a great deal in the ’80s. You get a really euphoric effect, and it’s an aphrodisiac too. It makes people very social. You let down your hair. Everything is fun. It’s a re-emergence of a real ’80s cocktail.’

You say you’re always flying in business class. So a lifetime of observation has gone into this film?

We tend to think a lot about sex and death on planes. Does ‘I’m So Excited’ bring that tendency to life too?

‘Yes. Without being over-dramatic, death is present from the moment you get on a plane. And yes, the fantasy of having sex on a plane is very common too.’

I was thinking a bit more generally than that specific fantasy!

Read our review of 'I'm So Excited' 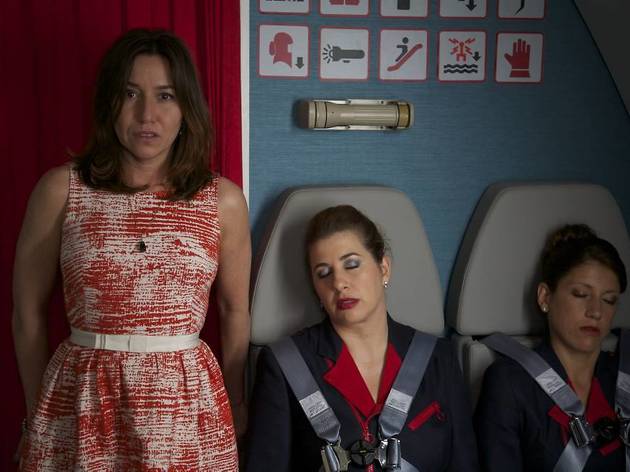 With its sprawling satire and knockabout tone, ‘I’m So Excited’ is the closest Almodóvar has come in years to early romps like ‘Labyrinth’, ‘Pepi, Luci, Bom’ and ‘What Have I Done to Deserve This?’ The context, of course, has shifted from post-Franco liberation in Spain to post-meltdown anxiety: having endured one crash, these characters face another. The auteur’s advice is to try honesty and get laid.