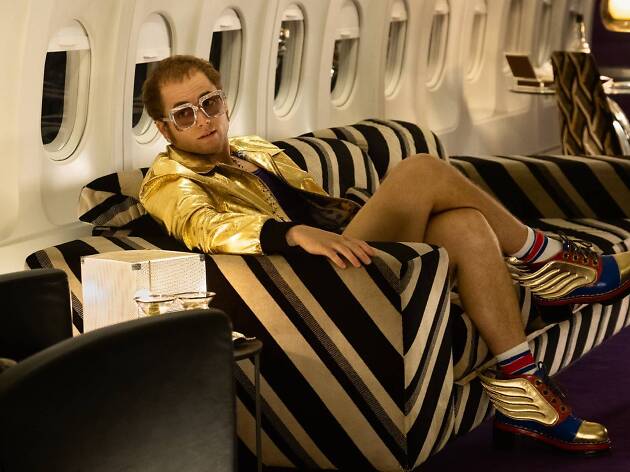 This Elton John fantasia reinvents the movie musical in a blast of raw energy.

Taking the old-fashioned highs of an MGM musical and pairing them with the deep lows of an addiction drama, ‘Rocketman’ is a turbo-charged rock fantasia that pushes hard against the boundaries of the medium as it zips through the first four decades of Elton John’s life. The songs explode from the screen, time jumps catapult the story forward with exhilarating élan and even the emotional stuff lands, for the most part. Sure, Elton John purists will be here until Christmas pointing out the flaws in the chronology and the liberties taken with real-life events, but they’ll be doing it dancing in the aisles.

It’s a credit to director Dexter Fletcher, who really comes of age as a filmmaker here, that any thoughts of ‘Bohemian Rhapsody’ fade away in a few short minutes. Fletcher was parachuted in to help finish that Queen biopic, but while there are some superficial parallels, he’s saved all his good stuff for ‘Rocketman’. From an opening blast of ‘The Bitch is Back’ which thrusts a young Reggie Dwight (Matthew Illesley) into a glorious sepia-tinged dance routine outside his Pinner home, the movie is filled with vividly choreographically, imaginatively staged, wow-isn’t-cinema-great moments.

One standout sequence spills a drunk and overdosing Elton suicidally into his LA pool, before segueing from ambulance to hospital to concert stage, via a boyhood version of himself playing the title track on a tiny piano. Underwater. All in the time it takes to play out the title track. It must have looked nuts in the script but on screen it’s a perfect representation of John’s crazed conveyor-belt lifestyle. And in a conventional biopic, it would have taken 20 minutes to plod through.

If there’s one thing the two films do have in common, it’s a grandstand central performance. Like Rami Malek’s Freddie Mercury, Taron Egerton combats a lack of close physical resemblance by nailing John’s physicality in micro detail: he’s a flamboyant showman on stage, but almost diffident off it, with an endearing boyish quality. He’s especially sheepish around his bullying manager/boyfriend John Reid (Richard Madden), a reminder that beneath the ginormous sunglasses and feathers, he was still a kid craving the love his parents denied him. Happily, Lee Hall’s (‘Billy Elliot’) script keeps that psychoanalysis the right side of mawkish, smartly framing the film around a group therapy session that enables John to act as a kind of unreliable narrator in his own story.

There are moments when the energy flags, almost as if the movie is taking a much-needed breather. The transition from gifted tyro to full-blown megastar, up to his first game-changing performance at LA’s seminal Troubadour club, lacks the energy of what follows, although Jamie Bell is typically terrific as Elton’s songwriter partner Bernie Taupin, the angel to Reid’s devil.

The early family stuff is a bit beige too, and despite Bryce Dallas Howard’s best efforts (and a decent home-counties accent), ‘Rocketman’ can’t quite decide whether Elton’s mum is a heartless monster or a put-upon woman just doing her best. It’s not, it’s fair to say, a movie full of complex female characters and the one it does have deserves better than to spend the final act buried beneath terrifying ageing prosthetics.

But ‘Rocketman’ gets right far more than it gets wrong. There’s no sugar-coating of the substance abuse, but it doesn’t lean in too hard on the cinematic clichés of white lines and endless empties either. Neither does it shy away from the question of John’s sexuality. There’s even – gasp – a sex scene between Elton and Reid that doesn’t just lapse into coyness. It feels like a progressive moment, a significant step forward in this retro rush of a musical.

Great story and excellent acting from Taron but I would have preferred if it wasn't a musical.