This autumn, two of cinema’s biggest franchises go head-to-head. In October, the new James Bond adventure ‘Spectre’ will be released into cinemas. Barely waiting for the dust to settle, ‘Star Wars: The Force Awakens’ arrives on December 18 like a great big shiny Christmas present. But which one are we most excited about? It’s pistols v blasters as super-secret agent David Clack and total space cadet Tom Huddleston fight it out…

What do you reckon – space or spies? Let us know in the comments. 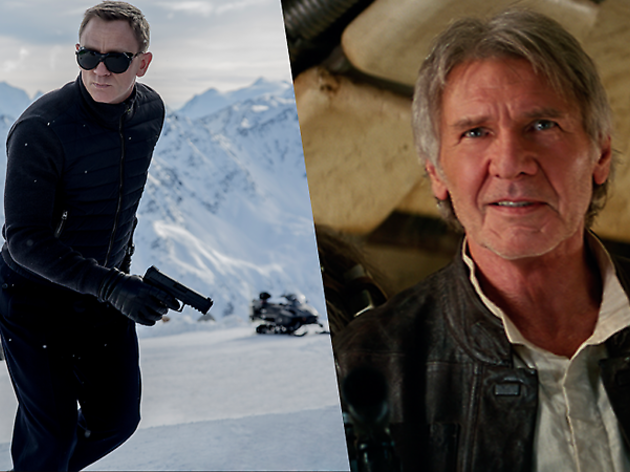 Can the legendary pantheon of original Star Wars characters compete with the ice-cool pulling power of MI6’s greatest secret agent?

David says: ‘Having smouldered his way through his first three Bonds, Daniel Craig may well spontaneously combust in “Spectre”, as he plumbs ever deeper depths in what’s rumoured to be his series swansong. We also can’t wait to see what his freshly established support team (Ralph Fiennes, Naomie Harris and Ben Whishaw) can bring to the party.

Tom says: ‘We’re talking six of the most beloved movie characters of all time, including the ultimate hipster playboy space-pirate. And that’s before we even get to the new guys, one of whom is from the planet Peckham. That gun-toting spy doesn’t stand a chance.’

‘Star Wars’. Even if Bond was half as hip as Han, he’s still hopelessly outnumbered. 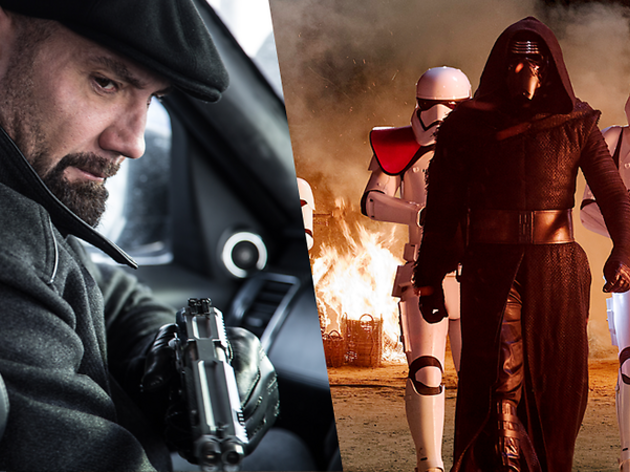 Rumours have pegged Christoph Waltz as a cat-stroking megalomaniac in ‘Spectre’, while the whispers about the ultimate villain in ‘Star Wars’ are so scandalous we don’t even want to repeat them.

David says: ‘He may not be playing Blofeld as initially reported, but Christoph Waltz – a man who’s built an Oscar-winning career on despicable bastards – looks a formidable foe for Craig’s angsty Bond. Throw in the gristly, thick-necked Mr Hinx – Dave Bautista, putting the “hench” into “henchman” – and Bond’s going to have his work cut out reaching the credits without a few smashed bones.’

Tom says: ‘Leaving aside the dubious scuttlebutt about a certain beloved Jedi taking a taxi to the dark side, the baddies in “The Force Awakens” will be The First Order, basically an army of goose-stepping space Nazis who grew from the ashes of the old Empire. And Adam Driver looks awesomely evil as Vader-inspired bad boy Kylo Ren.’

‘Spectre’. Christoph Waltz could eat Adam Driver for breakfast, then pick his teeth with his silly three-pronged lightsaber. 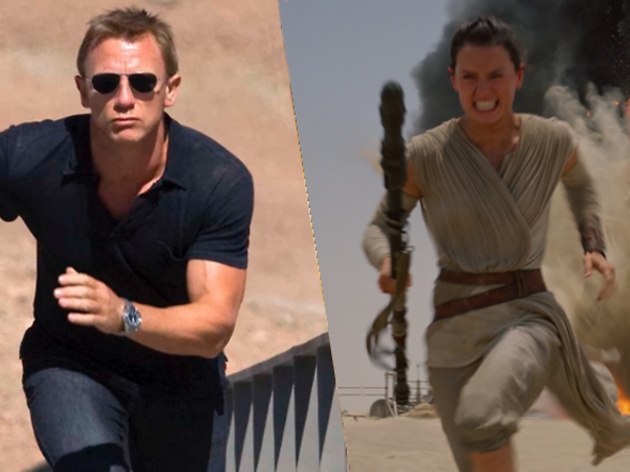 David says: ‘In the trailer alone we’ve got a supercar street race through Rome, a barrel-rolling helicopter, a speedboat on the Thames and a glimpse of what’s been called the series’ most technically challenging pre-credit sequence ever, in which Bond indulges in some unfinished business during a Day of the Dead parade in Mexico City. Your move, JJ.’

Tom: ‘You really don’t want to go trailer-to-trailer with “The Force Awakens” – even if the film turns out to be dreadful, this was still the year’s best 2 ½ minutes. Anyway, Bond could drive his speedboat over Niagara Falls in a tutu and it wouldn’t be half as fun and crazy as one second of the Millennium Falcon pirouetting and nosediving over the desert, pursued by a phalanx of TIE-fighters.’

‘Star Wars’. Because the hottest action happens in zero gravity. 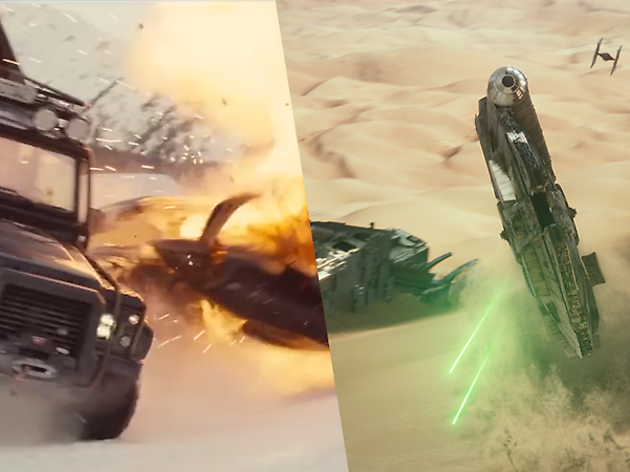 Flash or subtlety? ‘Star Wars’ will be dripping with visual sparkle, though director JJ Abrams has promised that many effects will be old-school. Bond takes a more down-to-earth approach, mainly using CG for backdrops.

David says: ‘The benefit of being part of a 24-film franchise is that there’s no lack of motivation when it comes to pulling off bigger and better stunts. After a spell of dodgy CGI in the Brosnan era, director Sam Mendes has brought Bond back to real stunts and real action, resulting in set-pieces so visceral you’ll be brushing imaginary debris off your shoulders. X-Wings, on the other hand, don’t actually exist outside of sophisticated CGI software.’

Tom says: ‘Back in 1977, “Star Wars” created a new special effects industry pretty much single-handed, and their standards haven’t dropped once, even during the dodgy prequel years. The behind-the-scenes glimpses we’ve had suggest that Abrams will be as good as his word when it comes to old-school puppets and miniatures. And that’s before we even get to the epic planet-spaces and spaceship dogfights. Sorry, I’m drooling.’ 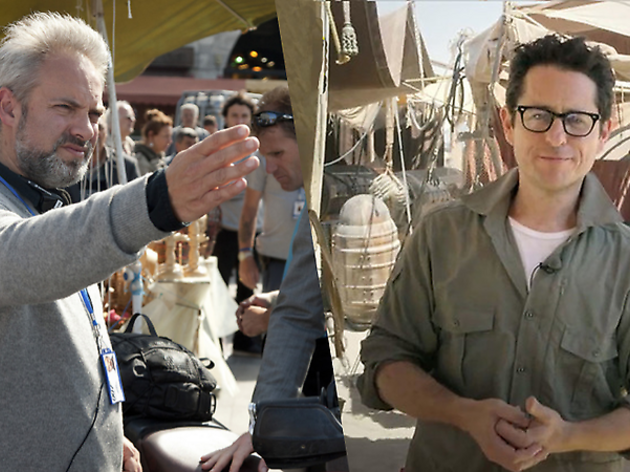 David says: ‘The numbers speak for themselves: even adjusted for inflation, “Skyfall” is the highest grossing James Bond film of all time. Is it any wonder, then, that the studio asked director Sam Mendes for an encore? Elsewhere, the backroom staff also includes “Skyfall” scribe John Logan and cinematographer Hoyte Van Hoytema, whose CV includes irrefutably beautiful Oscar nominees “Interstellar” and “Her”.’

Tom says: ‘No one involved with either film has a pristine copybook. JJ Abrams may have made some ropey choices (‘Super 8’, for instance), but at least he made the terrific “Star Trek”. Sam Mendes hasn’t made a single film that didn’t make my eyes droop – including the overrated “Skyfall”. I was briefly excited about Larry Kasdan being back on the “Star Wars” team – until I remembered that he directed arguably the worst film of all time, “Dreamcatcher”.’

‘Spectre’. Mendes and Logan have a proven track record, and with Van Hoytema on board it’s bound to look stunning. 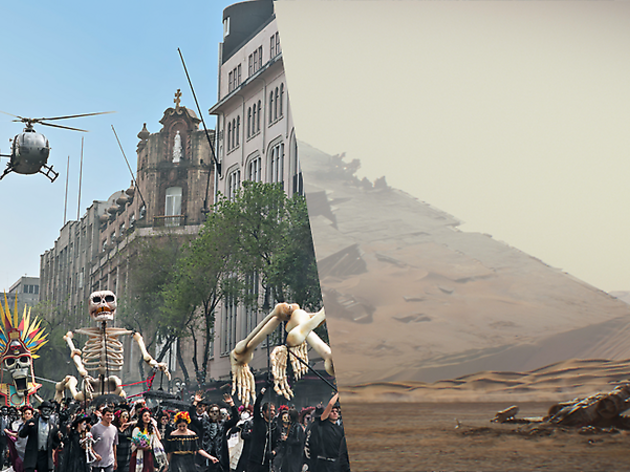 James Bond has been around the world more times than Lisa Stansfield with unlimited airmiles, and he’ll be cracking out his Lonely Planet guide again for ‘Spectre’. ‘Star Wars’ may feature more exotic locales – but does it count if they’re created in a computer?

David says: ‘Bond’s passport will be getting inkier than a hipster’s forearms in “Spectre”, as he scowls and quips his way from the baking, claustrophobic streets of Mexico City to the snowy mountain ranges of Austria. As confirmed by the film’s latest trailer, Rome is also on the itinerary, the ancient beauty of which will hopefully be at least slightly evident as Bond pelts through its streets in his Aston Martin.’

Tom says: ‘We know that “The Force Awakens” was at least partly shot on location in Abu Dhabi (for a world that looks suspiciously like Tatooine, but apparently isn’t) as well as Ireland and Scotland. I’ll admit, though, that most of the film will be set on the planet Bluescreen.’ 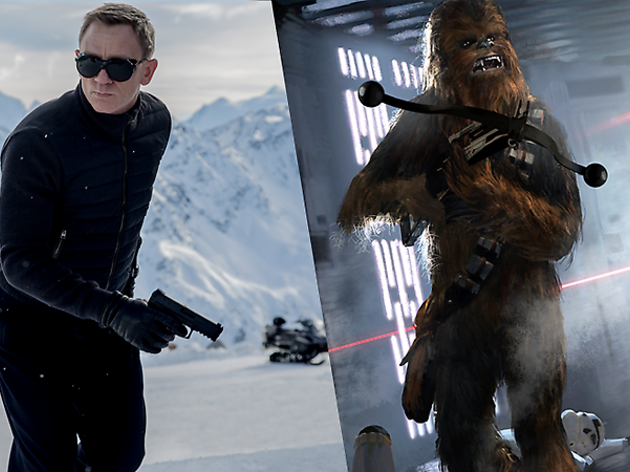 David says: ‘When was the last time you saw Chewbacca pouting into the lens in a glossy print campaign for Tom Ford suits, or Omega watches, or Aston Martin? I rest my case.’

Tom says: ‘Chewbacca, you say? You mean the hirsute seven-foot stud so achingly cool that he even has natural flares? Daniel Craig may rock a tux, but could he get away with striding around the galaxy like a boss wearing nothing but an ammunition bandolier? And that’s before we even get to Harrison Ford’s pipe-striped ‘70s kecks.’

‘Spectre’, but only just. James Bond may have every hair in place, but only because he doesn’t have as many to keep track of as Chewie. 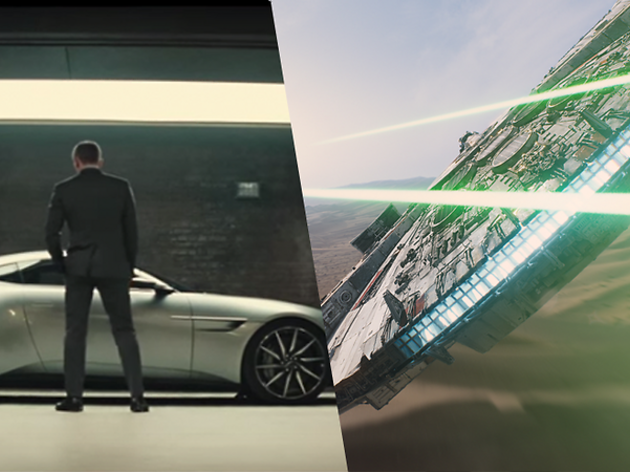 Whether it’s a brake-squealing, extras-scattering car chase through an exotic locale or an all-thrusters-firing spaceship dogfight, both of these franchises are built on speed. But which one takes pole position?

David says: ‘Sundry somersaulting helicopters and speedboats aside, the petrol-powered showpieces of “Spectre” are Bond’s Aston Martin DB10 and Mr Hinx’s Jaguar C-X75. The former was developed as a collaboration between Aston and the Bond team, while the latter was specially recommissioned for the film, having been abandoned by Jaguar at the concept stage. For the first time ever, Bond’s ride is as bespoke as his tux.’

Tom says: ‘Bond could be driving a time-travelling nuclear-powered Aston Martin made of solid diamond and it wouldn’t come close to the sheer epic class of the Millennium Falcon. The fastest hunk of junk in the galaxy makes your posh Jaguar XB nought-to-60 thingumajig look like a mobility scooter.’

‘Star Wars’. When James Bond gets a car that can go into hyperspace, get back to us. 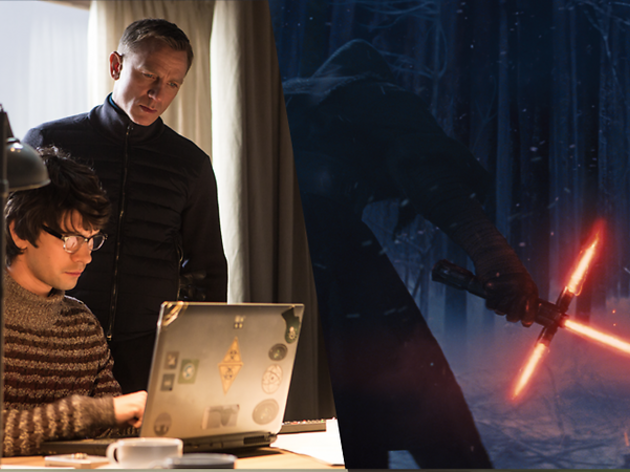 Where would Bond be without his nerve-gas biro? Which self-respecting Jedi would leave the house without his lightsaber? Without hardware, both films would just be a bunch of people in mad outfits staring evils at each other.

David says: ‘Does the reintroduction of Ben Whishaw’s Q signal the return of exploding pens and poison-dart watches? Whishaw himself hinted at as much in an interview last year, and, as hard as we grimace at the memory of the invisible car in ‘Die Another Day’, we’re secretly hoping “Spectre” will see Bond wielding more than the same old Walther PPK.’

Tom says: ‘The lightsaber remains the coolest of all fictional weapons – as Obi-Wan Kenobi says in “Star Wars”, it’s elegant, civilised and makes a really groovy humming noise (okay, we added the last bit). Add to that blasters, holograms and R2-D2, and the boffins in the MI6 backroom can’t really compete.’ 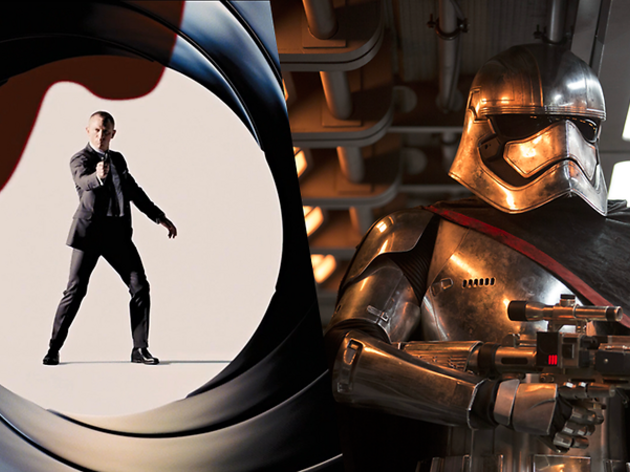 Audiences go way back with both franchises, and while each has had its low points – the late Roger Moore period, ‘The Phantom Menace’ – it hasn’t dulled our misty-eyed enthusiasm.

David says: ‘It may have only been three years since we last saw Daniel Craig pouting in a dinner jacket, but it’s been more than four decades since 007 faced off against the shadowy Spectre organisation (or to give it its full, wonderfully self-aware title, Special Executive for Counter-intelligence, Terrorism, Revenge and Extortion) in “Diamonds Are Forever”. Could any other series staples – cheeseball quips, Shirley Bassey – also make a comeback?’

Tom says: ‘Yes, the prequels took the edge off. But this is a chance to forget all about midichlorians, Gungans and “are you an angel?”, and get back to what “Star Wars” does best: epic space battles, goofy mysticism, wookiees, droids, the Millennium Falcon, badass princesses, ultimate evil, lightsabers, blasters and Harrison Ford grinning sideways.’

In this category – and indeed overall – it just has to be ‘Star Wars’. James Bond is a British institution, and we always look forward to his foreigner-blasting antics. But the thought of welcoming back Han Solo, Chewbacca and the rest of the old-school 'Star Wars' team just warms every damn cockle we’ve got. Let’s just hope the force is still with them.

Run through our 50 fave denizens of a galaxy far, far away… 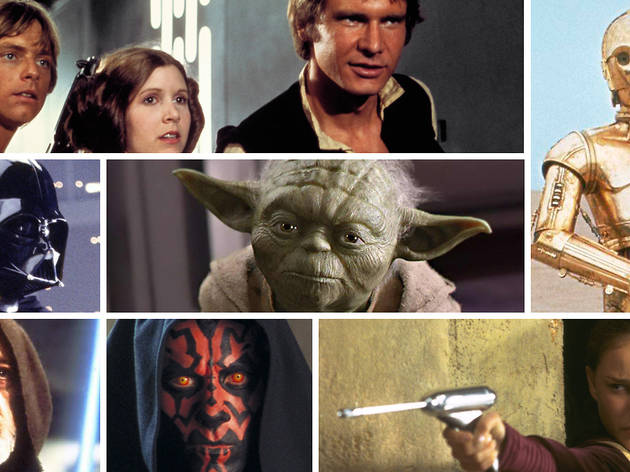 Has a cultural phenomenon ever inspired such devotion, such passion, such – for want of a better term – extreme nerdiness than the ‘Star Wars’ saga? From the films to the figures, the tie-in novels to the TIE-fighter coffee mugs, the blogs to the chatrooms to the international fan conventions, it’s the closest thing cinema has to a unifying faith…