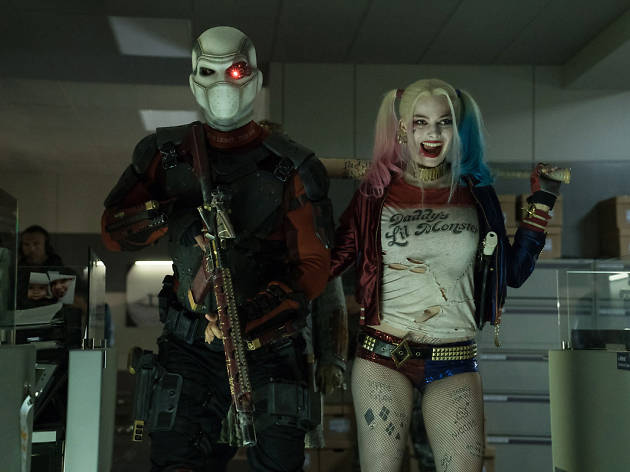 The big fear about the punky, not-for-kids comic-book movie Suicide Squad was that it might be too try-hard: Hollywood awkwardly slumming it with the alt crowd. But this loony wise-cracking DC Comics story, directed with anti-glossy grit by David Ayer (End of Watch, Fury), plays like a twisted B-side to some of the slicker movies in the comics world.

“You want to put our national security in the hands of witches, gang-bangers and crocodiles?” asks one government official as ruthless high-up Amanda Waller (Viola Davis) – the baddest badass in a movie full of them – introduces her scheme. Law and order is crumbling after Batman v Superman, and Waller intends to assemble a ragtag band of sicko ‘meta-humans’ to fight evil.

One by one, the Squad is gathered. Will Smith is former gang member Deadshot; Margot Robbie is psychiatrist turned psychopath Harley Quinn; Adewale Akinnuoye-Agbaje is Killer Croc; and so on. Waller has a second trick up her sleeve: she controls Enchantress (Cara Delevingne), an archaeologist by day, possessed shape-shifter after hours.

This is Batman’s world, and the chiselled guy (aka Ben Affleck) pops up but ends up looking like the square guy at a cool party. The soundtrack – Rolling Stones, The White Stripes, Eminem – says a lot about where this movie pitches itself: playfully fun in a Tarantino-lite sort of way. And it’s not all ultra-violence: each member of the Squad secretly dreams of a family, a fitted kitchen and a garden. In the end, Suicide Squad ends up being less a celebration of bad behaviour and more a tribute to outsiders.

There are too many characters for the movie to handle: blink and you’ll miss the Aussie guy with the boomerang. On the other hand, you might end up wishing for less of Delevingne, who winds up croaking like a chain-smoking granny. But what of Jared Leto’s The Joker? We see little of him, but he still threatens to steal the film. Leto plays The Joker like a volatile over-privileged teenager, though his voice hints at some older influences (a bit of Brando, a dash of Pacino, a hint of Anthony Hopkins). His relationship with Margot Robbie also makes him a twistedly romantic villain (watch out for their big gushy moment in a vat of chemicals!). This is not The Joker’s film, but must surely be a taste of things to come in sequels future.

In the end, the characters are more lasting than the story, which is a standard save-the-city-from-destruction yarn. But this crew is a riot, and their world is intriguing and even a little meaningful. What’s more – and this is no small thing in a time of bloated blockbusters – Suicide Squad clocks in at just over two hours, swept into port on a swift wind of pace and style .