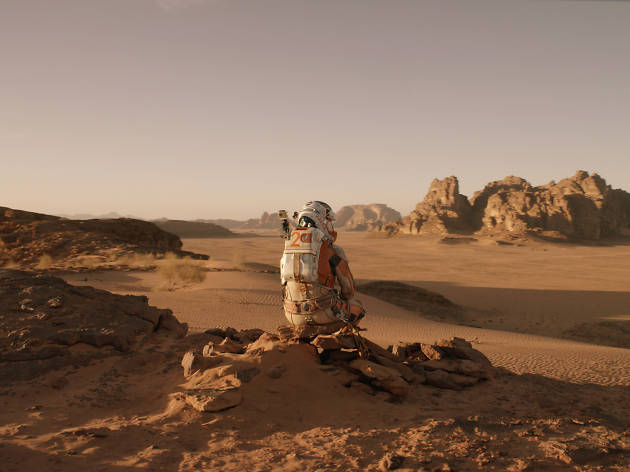 … in fact, it’s cold as hell’. So sang Elton John on his timeless 1972 smash ‘Rocket Man’, and it’s a lesson the makers of ‘The Martian’ have taken to heart. Okay, so American astronaut Mark Watney (Matt Damon) chooses to raise potatoes rather than children when he’s left for dead by his NASA crewmates on the Martian surface, but it’s close enough. And the temperature drops so low that at one point poor Mark is forced to cosy up to a barrel of spent nuclear fuel to keep warm, which sounds pretty hellish to us. 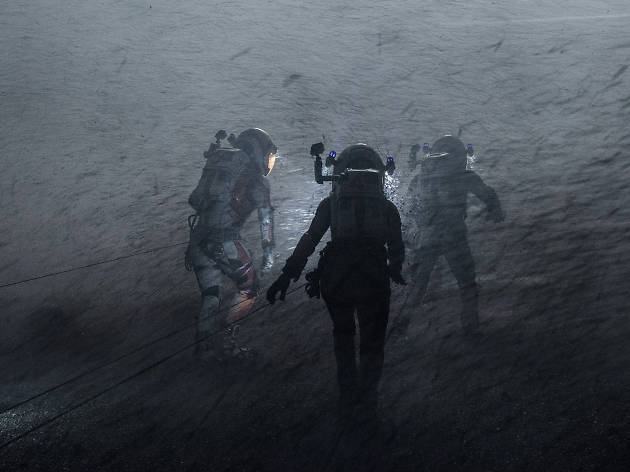 The portents weren’t exactly auspicious for ‘The Martian’. The source novel, originally self-published by computer programmer Andy Weir, was readable but hardly a masterpiece. And then there was director Ridley Scott, whose last decade – from ‘A Good Year’ via ‘Prometheus’ to ‘Exodus: Gods and Kings’ – has been a far cry from genre-defining masterpieces like ‘Alien’ and ‘Blade Runner’. But he’s pulled it off: this is Scott’s best film since ‘Gladiator’, while Weir’s clunky prose has been electrified by ‘Cabin in the Woods’ director Drew Goddard’s sparky script. 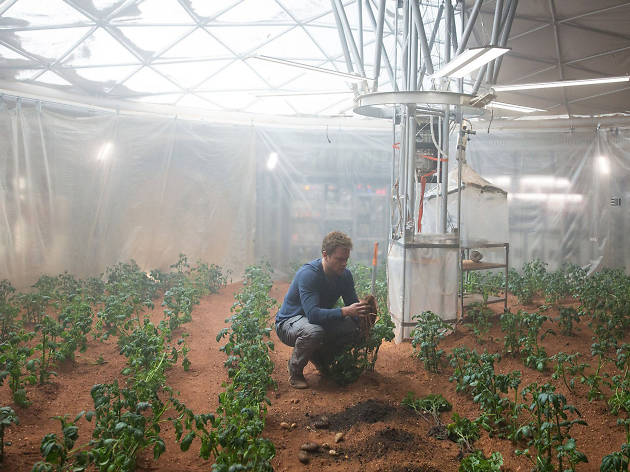 Of all the trials thrown at Matt Damon while marooned on Mars, perhaps the most gruesome is when he he’s forced to open up a bunch of freeze-dried packages filled with his (and his crewmates’) waste, stick the contents in a big bucket and mash it up with a stick. There are no nutrients in the Martian soil, you see, so he needs the poo to make his potato plants bloom. But our Matt doesn’t complain (or, apparently, feel the need to wash his crops). If they ever need a spokesman for the soiled potato industry, look no further. 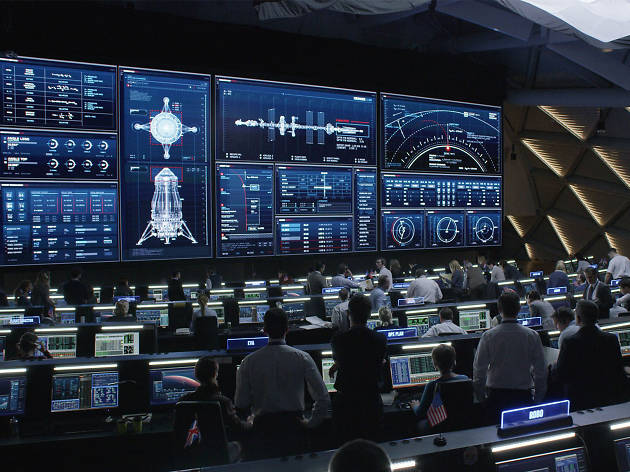 Blame the demands of the American family audience, but ‘The Martian’ goes light years out of its way to avoid all mention of the word ‘fuck’ – despite the fact that its characters use the word regularly. When our marooned hero finally makes contact with NASA, he’s understandably emotional. But when his messages are read out to the agency higher-ups – and, by extension, the audience – his gleeful swears are watered down to ‘effing’. Even more weirdly, when we see Watney’s messages printed out on screen, the f-words are, through some miracle of NASA’s internal computer system, automatically starred out. The word ‘shit’, however, is apparently totally fine. 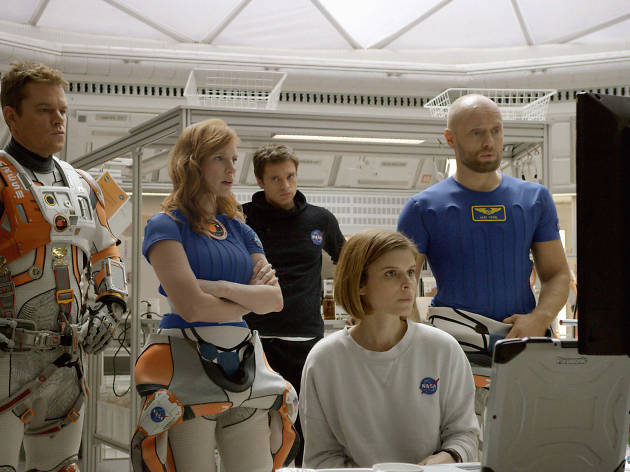 In real life, NASA has made a concerted effort to introduce racial diversity into the space programme. In ‘The Martian’, those strides appear to have been rolled back. With the exception of Michael Pena’s wisecracking pilot Martinez, the crew of the Mars ship Ares 3 is strictly Aryan (one of them’s even an actual German). Sure, the folks at Mission Control are a fairly mixed group, but it’s not quite the same if you’re not in actual outer space. What do we want? Off world equality! When do we want it? Sometime in the coming century! 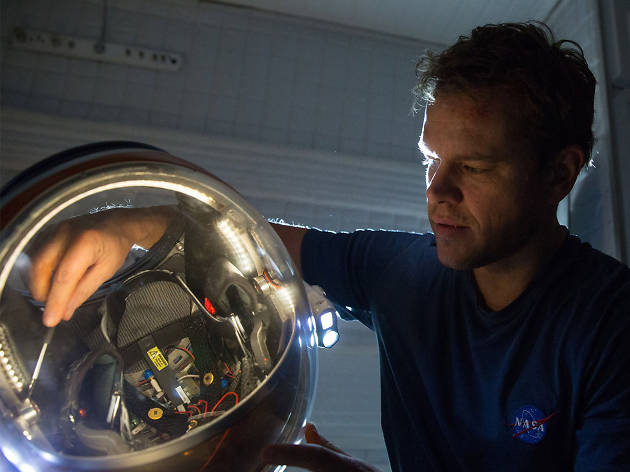 What’s even more frustrating than being left for dead on a barren alien world, having no way to contact home and being forced to subsist on shitty potatoes? Sellotape, that’s what. We won’t spoil things too much, but there’s one scene where Mark Watney’s entire survival depends on being able to stick a piece of vital equipment back together, and the stuff ends up sticking to itself, to his spacesuit, to anything but what it’s supposed to stick to. Anyone who finds themselves mummified every December 24 will feel his plight. 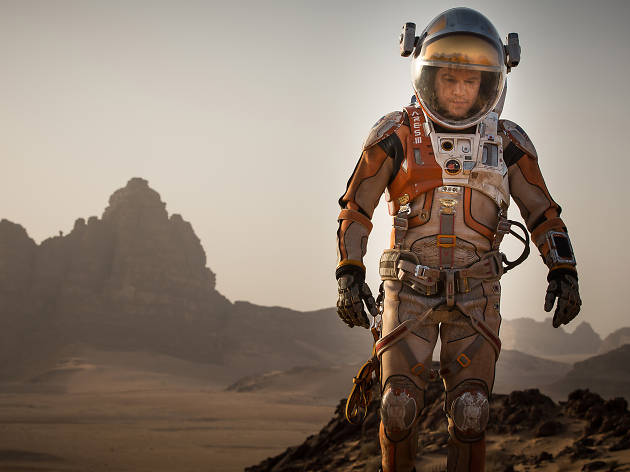 If there’s one thing better than blasting off in a space rocket, it’s doing so to the beat of a classic ’70s pop hit. As last year’s massive Marvel hit proved, punters will happily fork out for toe-tapping tunes they’ve known all their lives if you rewire their brains to associate it with fun space stuff. In ‘The Martian’, there’s a running gag that all our hero has to listen to in his remote Martian base is loads of disco – or what Ridley Scott and his people think is disco, but quite often isn’t (‘Waterloo’ by ABBA, for instance). We’re sure it’s purely a coincidence that massive soundtrack sales will inevitably follow. 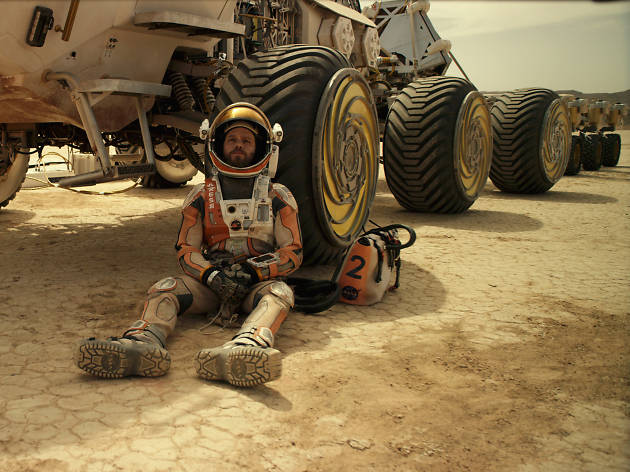 As ‘The Martian’ unfolds, the parallels with Steven Spielberg’s gritty WWII movie become increasingly clear. Both films involve expensive and risky missions to rescue Matt Damon (though ‘The Martian’ doesn’t dig quite as deep into the moral murk as ‘Ryan’ did). Both salute American pluck and ingenuity, and can quite happily be watched with your Dad on a wet Sunday afternoon. And both feature slightly cringey and unnecessary epilogue sequences involving flags. 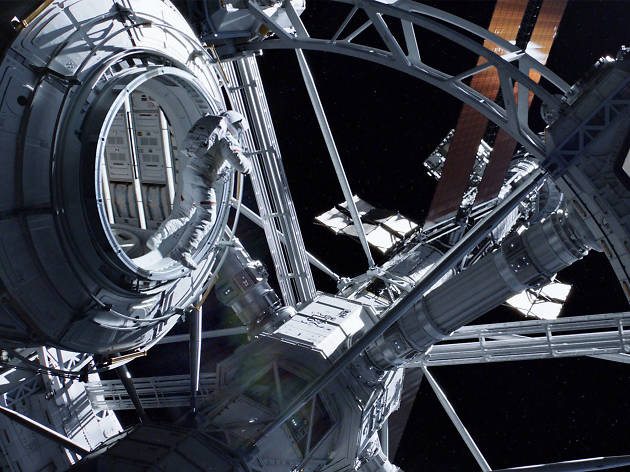 The parallels between Ridley Scott’s film and Alfonso Cuaron’s genre-redefining 3D space flick were inevitable. If nothing else, they’re working with the same special effects technology, so they’re bound to share a common aesthetic. And yes, ‘The Martian’ features a preponderance of floating debris, immersive starscapes and astronauts in suits spinning wildly about and breathing heavily. But there are deeper similarities, including a dedication to scientific realism, a salute to NASA’s achievements and a fair bit of slightly unconvincing, awkwardly forced-in character backstory. 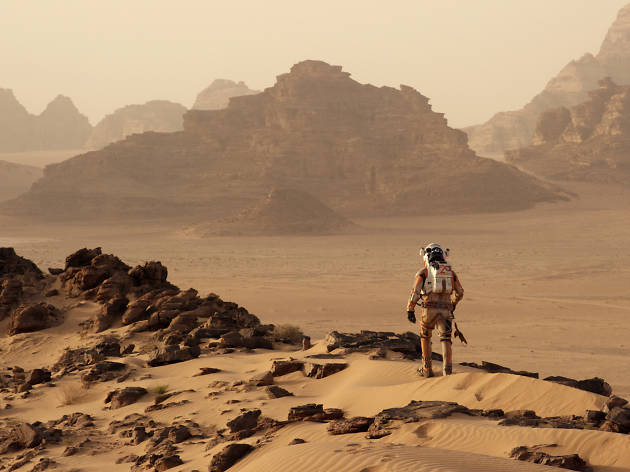 We can’t really imagine ‘The Martian’ winning Best Picture – but then, we could say that for pretty much every recent winner except for ‘12 Years a Slave’, and the Academy are an unpredictable bunch. We wouldn’t be surprised if it scores a nomination, though, and Ridley Scott is a strong outside bet for Best Director. But where the film is bound to hit big is in the technical awards. Unless ‘Star Wars’ muscles in, it’s got the visual effects, costumes and especially sound categories sewn up. But however it pans out on the big night, ‘The Martian’ has already done what it set out to do: offer an immersive, thrilling moviegoing experience, and prove that Ridley Scott is still a filmmaking force to be reckoned with.

Read our review of ‘The Martian’ 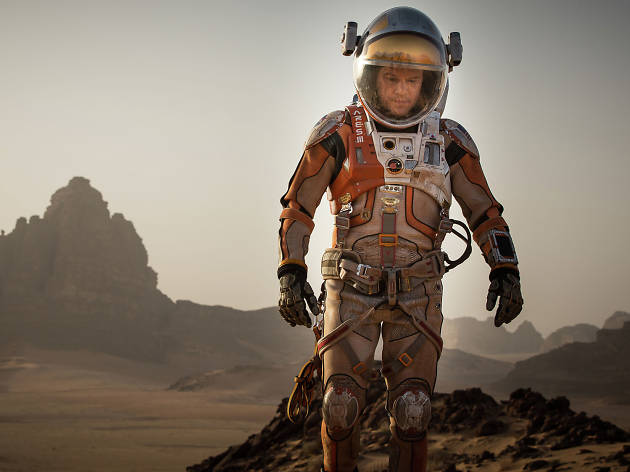 Showing a signature flair missing since 'Gladiator' (2000), Ridley Scott returns to mainstream mastery with 'The Martian', a space misadventure turned survivor’s tale. Similarities to 'Apollo 13' and the more recent 'Gravity' will be obvious to anyone who’s ever rocketed into zero-g thrills, but that’s not to say that Scott - who does well by Andy Weir’s science-heavy 2011 novel (smartly streamlined by screenwriter Drew Goddard) - doesn't bring his own spin.