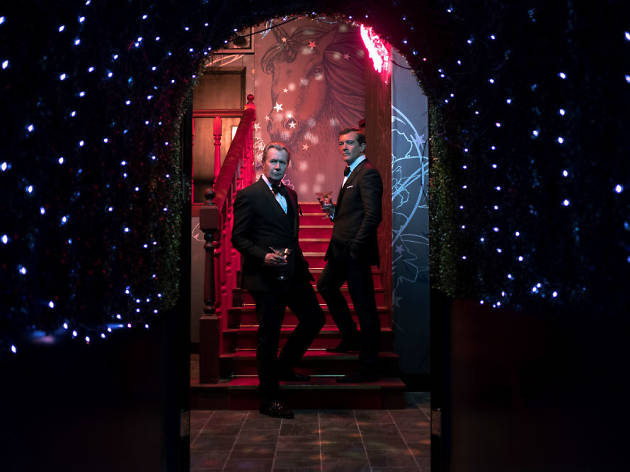 Steven Soderbergh delivers a rare misfire with this nose-honking satire of global money laundering and the super-rich.

‘The Big Short’ used a series of sudden celebrity cameos to explain the complexities of the 2008 financial crisis: Margot Robbie had a bath, Selena Gomez played blackjack, Anthony Bourdain made a fish stew and presto! We all knew a bit more about subprime mortgages (and halibut). It was basic but it worked, mostly because everything else in the film was so complicated. Steven Soderbergh’s ‘The Laundromat’ proves that the glib device doesn’t stretch to an entire film – not even one as stocked with gold-ribbon actors as this.

Put simply, ‘The Laundromat’ is a rare Soderbergh misfire; a semi-parodic skew on the other financial crisis so bumpy, surely not even Meryl Streep could win an Oscar for it. It’s loosely based on ‘Secrecy World: Inside the Panama Papers Investigation of Illicit Money Networks and the Global Elite’, a book by financial journalist Jake Bernstein that delved into the shadowy world of shell companies, insurance fraud and tax avoidance, whose existence was leaked by an anonymous hacker in 2015. At its centre was a Panamanian law firm called Mossack Fonseca, who’d helped launder money for world leaders, celebrities, sportsmen and, as the film is quick to acknowledge, movie folk alike (Pedro Almodóvar was sucked into the fallout).

We don’t meet any of these people – or the hacker. Instead, ‘The Laundromat’ uses a fictional American retiree, Ellen Martin (Streep), as a conduit through the murk. Newly widowed in a pleasure boat accident and diddled of her husband’s life insurance payoff, she sets about trying to uncover how this fraudulent web operates. Except ‘The Laundromat’ isn’t ‘Erin Brockovich’ or ‘Silkwood’, with a campaigning blue-collar figure standing up for what’s right. In the spirit of its director’s other big-canvas investigations like ‘Traffic’ or ‘Contagion’, it pulls back to show Martin as the tiniest piece in a vast global jigsaw that includes African billionaires (Nonso Anozie, a highlight), British lawyers (Matthias Schoenaerts), Chinese politicians’ wives (Rosalind Chao) and Las Vegas realtors (Sharon Stone).

Each of these mini parables is watchable in its own right, but the lack of firm narrative glue to hold them all together lends ‘The Laundromat’ the feeling of a journey with no real destination. With a meta flourish, screenwriter Scott Z Burns (‘Side Effects’) frames this byzantine, sorta-connected collection of financial horror stories with a smug double act of lawyers (Antonio Banderas and Gary Oldman), who genially talk through the intricacies of ripping off the system. The twist? These two cocktail-quaffing berks are Jürgen Mossack and Ramón Fonseca. It’s like ‘Titanic’, only with 90 minutes of the iceberg regaling you with its ocean liner-sinking skills, while sipping a Mai Tai.

The tonal lurches – from jokey to earnest and back again – will have whiplash setting in by the time its eccentric fourth-wall-breaking coda comes around, while some odd casting choices (and accents) drain gravity from the serious moments. While Oldman’s German accent is all of a piece with his OTT character, it’s hard to take Schoenaerts’s Oxbridge lawyer seriously with an English accent that registers a ten on the Dick Van Dyke scale.

And is it unfair to say that ‘The Laundromat’ kernels its disdain for its fraudulent lawyers and grifting bankers with just a glimmer of admiration for their ‘Ocean’s Eleven’-ish chutzpah? Maybe, but it definitely can’t resist the cinematic sizzle of the trappings of their wealth: the fast cars, azure pools and Gatsby-sized mansions. Greed may be a contagion in this globalised world, but if the sybaritic world of the super rich really is a dark cosmic joke, as ‘The Laundromat’ seems to suggest, it needs a better punchline.