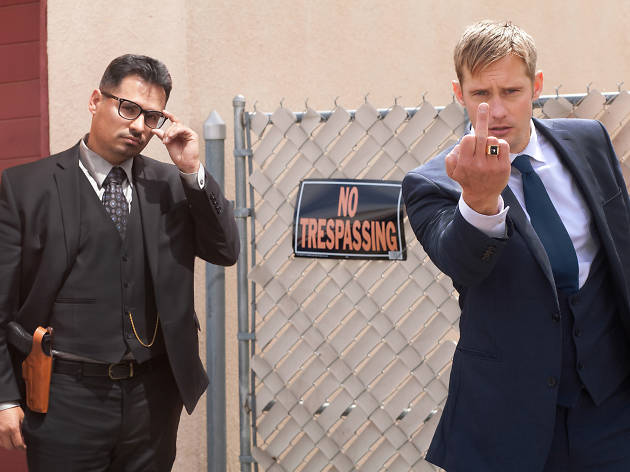 A patchy black comedy thriller from the director of Calvary

The setup is basically ‘Bad Lieutenant’ doubled up and packed with bantz. Alexander Skarsgård is Albuquerque cop Terry, who cruises the dusty streets with his partner Bob (Michael Peña) robbing drug dealers, blackmailing criminals and gleefully insulting everyone they encounter. There’s a hardass lieutenant (Paul Reiser) on their case and a smarmy British lord (Theo James) with evil designs, but it’s all just one big, dirty game to Terry and Bob (that they have the same names as 'The Likely Lads' can't be a coincidence, can it?).

It doesn’t help that ‘War on Everyone’ comes hard on the heels of ‘The Nice Guys’, a film that took a similar formula and spun it for bigger laughs and much deeper emotional resonance. The casting, too, is dubious. Peña (‘End of Watch’) is a riot – this is the role he’s been after for years – but Skarsgård is a dry, sneering foil, and James is dull as the villain.

McDonagh’s plot is intentionally rambling, taking scenic detours to grotty bars, racing stables and, rather wonderfully, Iceland. His dialogue is often hilarious and strangely poetic (‘I always wondered, if you hit a mime, does he make a sound?’). But it’s all so painfully postmodern, with a tacky, irritating habit of critiquing itself at every turn (‘You ain’t got a good script, you ain’t got shit’). After the bruising honesty of ‘Calvary’, it’s probably not surprising that McDonagh felt the urge to cut loose a little and make a movie with few ambitions beyond cheap violence and filthy laughs. Let’s just hope he’s got it out of his system.

I get the feeling the plot for this film may have been developed by passing round a piece of paper at a party where everyone's told to write an idea then fold the paper over and pass it on. There seemed to be no rhyme nor reason to any of it, and while totally watchable ( in a tedious sort of way) I couldn't help wondering how it ever got made. It does have its comic moments, but mainly just the one short scene (where a villain has been tracked down to Iceland). It seems to me the director may well have set out achieve cult status following retrospective acclaim from obsessives who after watching it over and over and pondering over every last banal detail declare it a masterpiece.

There are a fair few curious details, but for me it couldn't really be further from a masterpiece, rather a fairly tedious and tacky film with one amusing scene.

Alexander Skarsgård and Michael Peña make one of the best copy duos in this action comedy about two corrupt cops, the one liners didn't stop. I was expecting the storyline to be stupid but it had some depth to it, it was original and gave you that total feel good feeling at the end. It even has an unexpected artistic appeal, with great shots that reminded me of a Wes Anderson movie. Definitely worth watching!

This is not your typical action movie in fact there’s nothing typical about it.

Funny but dark even awkward at times and very random that makes you think - ‘what the hell!’ - but at the same time you won’t be able to stop laughing without even knowing why.

There are flashes of ‘Tarantino’ style with a spice of ‘The Hangover’ and a hint of ‘Jason Bourne’ but at the same time is completely unique.

I really don’t know what to tell you apart from – Go and see it for yourself!

Attended the Time Out Card screening at Vue Islington tonight. Found this film to be a little inconsistent but very funny in parts. Refreshingly non PC . Good to end  a Tuesday with a little laughter