The ‘Harry Potter’ movie juggernaut screeched to a halt when they ran out of books and Daniel Radcliffe got old enough to spend his millions on a Wilkinson Sword. But the ‘Fast & Furious’ franchise looks set to run and run – even after the tragic death in 2013 of its star Paul Walker. Film seven is out this week, and three more are planned. But can you watch all seven in one day and keep hold of your sanity? Teabag in, telly on. Engines revved. We’re off to the races.

6.03am
The only way to fit seven films in one day is to start at dawn. The first film starts as the series means to go on – with a roar of engines and a screech of tyres. There’s a truck heist underway, but I’m more concerned that the racket will seriously piss off my neighbours.

6.05am
Paul Walker looks so young, grinning beneath a curly mop like he’s fresh out of the Boy Next Door training academy. What a waste.

6.08am
And there’s Vin Diesel, not at all fresh-faced. In fact, he looks like a rubbery cartoon penis from a US Army sexual health training film. Ironic, given his initials.

7.43am
In a classic display of macho bonding winning out over common sense, Paul the undercover cop lets Vin escape, despite his many crimes. I’d forgotten how good this movie is. 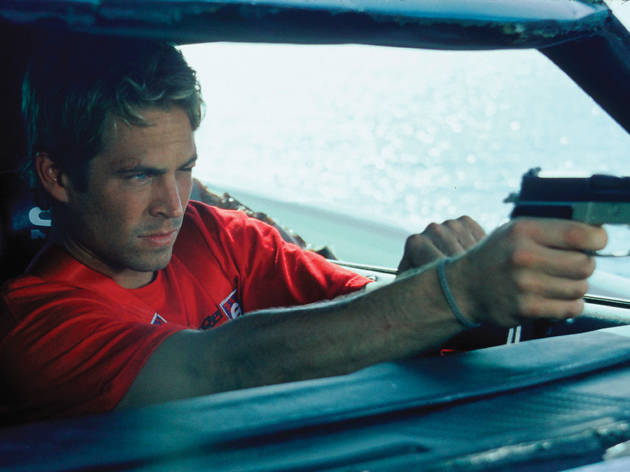 7.52am
Not seen this one before, and I’ve heard nothing good about it. Even the title is idiotic. There’s no Vin this time, so P-Dubs has teamed up with childhood buddy Tyrese Gibson. They seem to have a profound fascination with each others’ bums. ‘When I needed your ass, you were nowhere to be found,’ accuses Gibson. ‘I got something for your ass!’ bellows Walker a few minutes later, brandishing his middle finger.

9.25am
This ass business is getting out of control. The film’s best line: ‘Stay your ass off my homeboy’s boat!’ Also, ‘That’s some driving for your ass!’ which could be the tagline for the entire series.

9.47am
This is the black sheep of the franchise, featuring neither Walker nor Diesel. It’s about a surly high school kid called Shaun, played by Lucas Black, whose car gets flipped, turned upside down. He gets in one little race and his mom gets scared and says ‘You’re moving in with your grouchy ex-military dad in Japan.’ I amuse myself by making up Fresh Prince lyrics for the next hour.

11.49am
The title is the same as the first movie, only with ‘the’ and ‘the’ taken out. It’s confusing. But I’m thrilled to see that the original cast is back, looking older and leatherier, if not exactly wiser.

1.39pm
We’re headed for Mexico, which is my cue to whip up a steak burrito for lunch. I try to eat one-handed like a trucker, but end up with soured cream all down my arm.

1.15pm
It’s getting a bit Indiana Jones as our heroes pursue the bad guys through the world’s most well-maintained mine shaft. My vision is starting to go a bit crooked. I clutch the sofa as the camera plunges, feeling decidedly queasy. 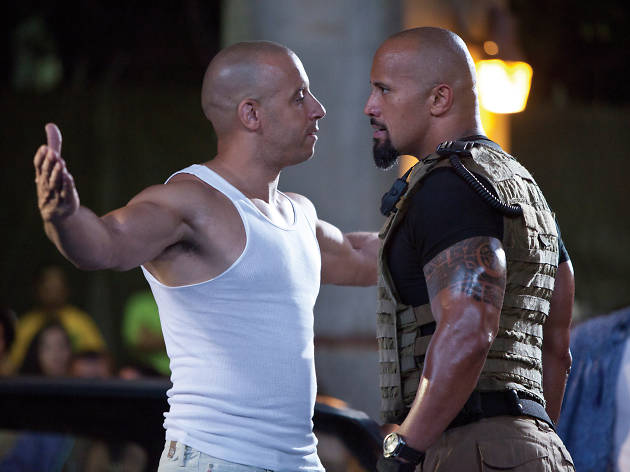 1.42pm
We’re off to Rio. If there’s one thing guaranteed to snap me out of my gasoline stupor, it’s The Rock in a shiny goatee. It’s like he dipped his chin in honey then stuck it in a bowl full of his own pubes.

2.32pm
I’m getting confused. Our heroes are putting a team together for another heist, and they’ve hired a Japanese racer who I’m sure got burned alive two films ago. Maybe he’s a zombie? My brain hurts.

2.48pm
‘A hundred million sounds like an awful lot of vaginal activity to me,’ grins Tyrese, and I fight the urge to scrub my ears out with a steel brush. Still, at least he’s stopped banging on about asses.

3.17pm
The gang steals a safe full of money and tows it through the streets of Rio, smashing glass and sending pedestrians flying. This, right here, is what I signed up for, one of the most insanely inventive, tactile and gripping action sequences ever shot. It’s made my day.

15.48pm
A trip to London. Cue Stephen Fry cameo! Not really. We have to make do with Luke ‘Bard the Bowman’ Evans in a creepy tache. I’m really not sure how much more of this I can take.

4.04pm
Mid-chase, a real police car screams past my flat. I have a terrifying vision of Vin Diesel in a souped-up Dodge, flying through the window blinds and flattening my living room table. Then I remember I’m on the third floor.

5.41pm
Using a carjack to prize myself off the sofa, I head out. I’ve got an hour to get to the South Bank for a preview screening of ‘Fast & Furious 7’ at the Imax. 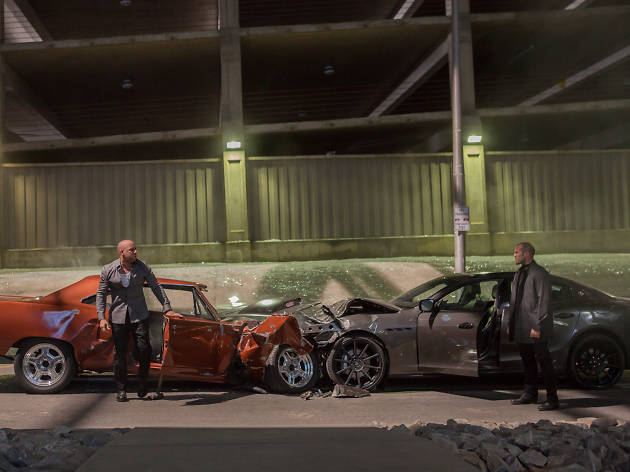 6.45pm
My brain’s vibrating like an idling carburettor as I settle in and try not to make ‘vroom vroom’ noises. I pound down a fistful of Ibuprofen and cling to the armrests.

7.03pm
That enigmatic Japanese chap who died and came back to life has died again. Farewell, Japanese Jesus.

7.17pm
Feisty baldies The Rock and Jason Statham are going at it hammer and tongs. You could drop a silk net on them and hey presto, the world’s largest pair of budgie smugglers.

7.48pm
Paul Walker pulls an ‘Italian Job’ trick on the side of a toppling bus and the audience bursts into spontaneous applause.

9.05pm
The film finishes with a tribute to Paul Walker. I hear sniffles around the cinema. He may have brought me to the verge of screaming insanity, but I can’t help feeling a wave of nostalgia, remembering him this morning (was it really only this morning?) with his pageboy curls and conquer-the-world grin.

9.08pm
And it’s over. I stagger from my seat, desperate to find a quiet place, miles from anything with an engine. Then I remember I’m smack in the middle of one of London’s biggest, busiest roundabouts. I hear the blare of horns and my knees weaken. How nice it would be just to curl into a ball on the concrete and whimper for an hour or two. But I can’t. They’d send an ambulance… 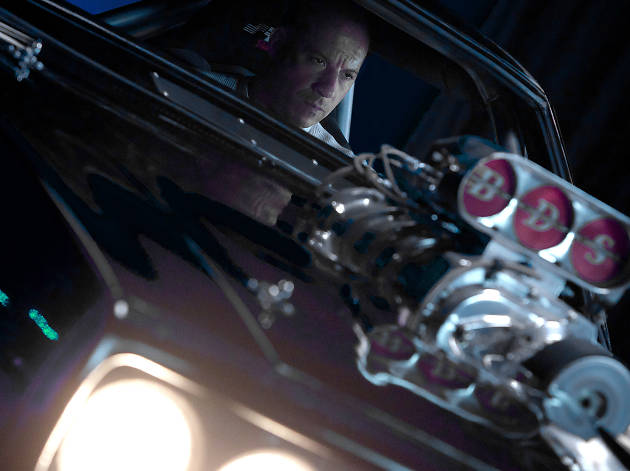