My Account My Profile Sign out
My Account
Search
Worldwide Europe United Kingdom England London ‘Will I show Hereditary to my kids? I’m not a weirdo!’ – Toni Collette on her must-see horror
Advertising

From ‘Muriel’s Wedding’ to ‘Little Miss Sunshine’, the chances are Toni Collette has lit up one of your favourite movies. Despite all those gems, and the Oscar nod she snared for ‘The Sixth Sense’, the Aussie actress still feels weirdly underrated. Ace new horror ‘Hereditary’, in which she’s devastating as the grieving, traumatised Annie Graham, should remedy that once and for all.

‘Hereditary’ has a 30-year-old first-time director in Ari Aster. You also worked with M. Night Shymalan when he was a young filmmaker on ‘The Sixth Sense’. Do you like working with up-and-coming directors?

‘I’ve worked with a lot of first-time directors. I’m not ageist: I’m drawn to people who are talented. When I was sent this script I wasn’t looking to do anything heavy. In fact, the opposite. I’d done a slew of films that I’d found a bit taxing so I just wanted to disengage a bit and not be so emotional at work. But I couldn’t refuse, it was so brilliantly written. I had no idea how old Ari was, but he has to be one of the best I’ve ever worked with. Yes, he’s green to a certain extent but he’s the most professional, prepared, meticulous director. It had been a long time since I’d felt like the director was as "in it" as I was.’

Are you a fan of horror films?

‘I don’t watch them – my imagination is too vivid and I do not need to water that garden. When I first read the ‘Hereditary’ script, it felt more like [Ang Lee’s] “The Ice Storm” – this intense family drama. It’s not entirely horror.’

How hard was it to maintain your character’s mania for take after take?

‘It was a bit exhausting, I have to say. But in the end, I liked the mania because she’s a woman who’s been sitting on secrets for so long. In a way it’s a film about an awakening, except while we associate awakenings with something positive and enlightening, here it’s hopeless.

‘I can’t remember if it’s in the script or something Ari and I talked about, but the character Gabriel Byrne plays used to be her therapist – so she married her old therapist. There’s an element of fragility about her.’

Collette as troubled artist and mum Annie Graham in ‘Hereditary’

Do you develop the layers you reveal in those moments when you’re prepping for the role?

‘Yes and no. If I vibe with a story, then it just naturally emerges; I don’t have to work too hard. I used to leave set and weeks later be thinking, I should have done that! But I’ve realised that it’s just a moment in time and I’ve let myself off the hook.’

‘Hereditary’ has been acclaimed as a horror classic. How does that kind of reaction affect you?

‘I’ve made a lot of pretty good movies that haven’t found their audience, for whatever reason, so it’s exciting for several reasons. I really feel that Ari is the real deal and this is a really fucking good film. It’s exciting when something original comes along because that’s what everybody wants. I feel that this film, in particular, really lends itself to a communal experience. People will enjoy seeing it at the cinema.’

It probably isn’t one to show your kids, right?

‘Not until they’re old enough – I’m not a weirdo! My daughter is ten and my son is seven and the only film of mine they’ve seen is ‘The Way, Way Back’ and my daughter watched ‘Little Miss Sunshine’, they’ve seen ‘Connie and Carla’ where I play a drag queen, and a couple of animated things. I do have a tendency to go for a bit of grit and darkness.’ 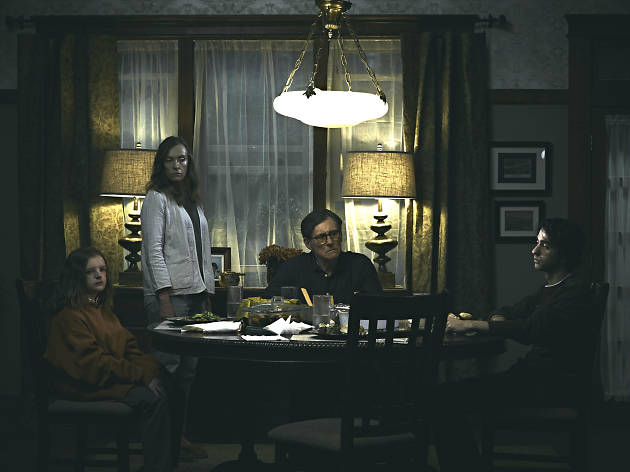