My Account My Profile Sign out
My Account
Search
Worldwide Europe United Kingdom England London Björk talk: the avant-pop queen on festivals, technology and how to get old
Advertising

Björk has won hearts and minds with her unique worldview, sartorial oddity and occasional flash of paparazzi-beating badassery. Now 49, she continues to not just push boundaries but demolish them.

Having started out as a child singer in her native Iceland, she broke out with indie band The Sugarcubes in the ’80s, then went full-on superstar in the ’90s with solo albums ‘Debut’ and ‘Post’. Covering electronica, jazz and Broadway show tunes, they set the template for a singularly inventive career. She has released six studio albums since, almost all of them wildly experimental (crafting songs around soaring strings, human beat machines, plinking music boxes) and not one of them a clunker or an insult to its audience’s intelligence. (We recommend you soundtrack this interview with our playlist of the best Björk songs.)

Released in January, her latest album, ‘Vulnicura’, is intricate and beautiful and tough: a bloodstained-lace valentine that describes her break-up with visual artist and long-term partner Matthew Barney in 2013. But – as she pours me some coffee in her publicist’s office in New York and we start talking about her topping the bill at Wilderness festival this summer – there’s little trace of that melancholy.

Instead, there’s playfulness. She’s wearing a silky black-and-white-striped dress with batwing sleeves; a rainbow-coloured fringe zigzags down the front, like the foliage on the truffula trees in Dr Seuss’s ‘The Lorax’. Her hair is black and slightly wild, and it’s her main vehicle for expression – she often pauses to run her hand along a strand or fling the whole lot back from her face. 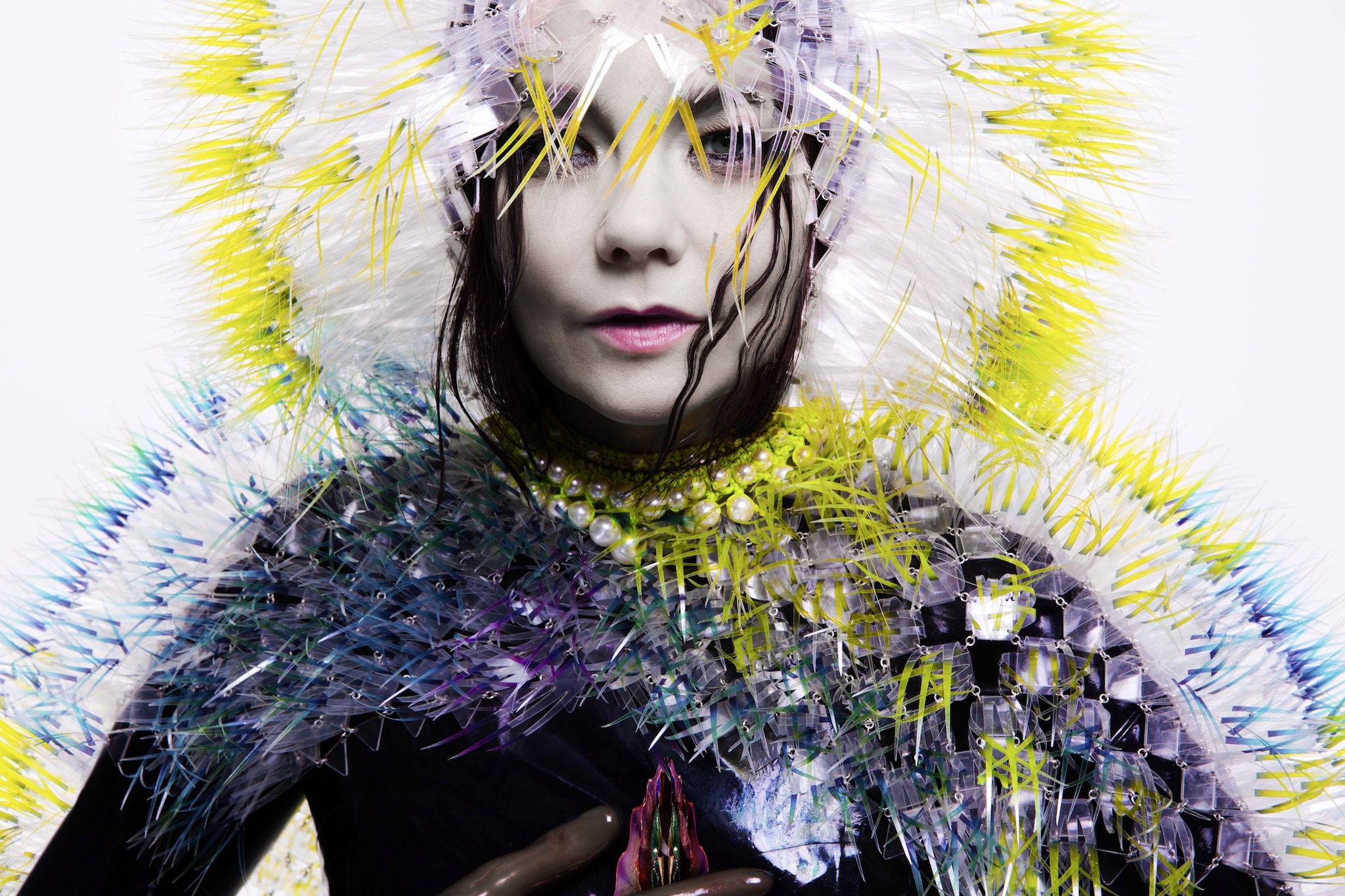 You’re headlining Wilderness this year. What appeals to you about it as a festival?
‘I think it has to do with the kind of music I make. I’m not middle of the road. My songs get very well supported either in a delicate, beautiful indoor setting or an extreme, outdoor setting like a forest or by the ocean. A sports arena is not doing me any favours, and I’m not doing it any favours!’

Do you like playing music festivals?
‘I’ve got a lot of faith in them. I was playing festivals from the beginning, when a lot of people didn’t think it was cool. They thought it was cheap or whatever. I never played arenas, which I probably should have, moneywise or careerwise or boring blah-blah-blahwise.’

How about going to festivals? Can you do that?
‘Overall, I can do most things I want to do. But that is probably the one thing I can’t get away with because people know who I am. I’m not judging people who like to be photographed in their spare time; I’m just not one of those people. Obviously I’m spoiled, because half the year I’m in Iceland where it’s kind of an unwritten agreement that people just let me be, which I’m really grateful for. I’m sorry, I’m just a private kind of person.’

‘Not many women singers have documented themselves after 60. How can you do that without pretending you’re 25?’

You were in a rough emotional space when you recorded ‘Vulnicura’, after splitting up with Matthew Barney. How are you feeling now?
‘I feel very, very different now. I wrote those songs a couple of years ago, which is a long time in affairs of the heart. “Vulnicura” was extreme. It was like: “How melodramatic am I being here?” I decided that if I went all the way, it’d be tidiest in the long run: If I go really messy now, the mess will be done.’

So you’re not going back to that space at all?
‘I think, looking at a lifetime, you can only go there once. In some ways I got away with going there because I hadn’t before. I feel really lucky overall – I had no idea [the break-up] would get that much attention, and people are really focusing on the healing factor. I’m grateful it’s not about the destruction but the healing thing. Thank God my subconscious agrees with me.’

When you listen back to ‘Debut’ and the tracks from ‘Post’ that made you famous, like ‘It’s Oh So Quiet’, what do you think?
‘I have a good relationship with my old songs. Obviously I can’t say that they couldn’t have been better. But I did my best at the time, and you can’t do any more than that. I also feel that each was very much a child of its time. I have an obligation to be the person of the age I am. At 45, I’m going to do a very different album than when I’m 25. Looking back to “Debut” now, it feels it was like drinking water, but thankfully I’ve got diaries – and it was a headfuck.’

Has making music become less of a headfuck?
‘Every single time it’s going to be as difficult to solve the murder mystery – like, “Who am I?” There are more hindrances because I’m a woman. Being the sort of topsy-turvy prankster I am, that makes me even more excited about the impossible riddle of that. Not many women singers have documented themselves after 60. How can you do that without pretending you’re 25? I have this beautiful album by [French artist] Louise Bourgeois where she’s singing – when she’s 70 or something – French children’s songs. And coughing between and smoking. I love it.’

Your 2011 album ‘Biophilia’ was released alongside a series of iPad apps. Can you imagine doing another album that’s multiplatform?
‘I can see that happening. I’m just not sure what it is yet. It would have to be from a totally different angle. I’m flattered because people think of me as this really techy person, but I’m actually not.’

Really?
‘I’m a messenger of the average person. The way I use technology has always been waiting for it to come to me. I worked for such a long time in studios, and I see it quite a lot: people learn one gear, and they get really good at it, and it starts directing the songwriting. The tool becomes the leader. I’m a singer: that’s my main tool, so that directs me a lot. With [the ‘Biophilia’ apps] it was like: Wow, now it’s so simple! I can understand it.’

Are there aspects of modern technology that concern you?
‘Right now my heart is very concerned about the Iceland highlands. The government has decided it’s going to make dams all over the highlands, and so the biggest untouched area in Europe is going to go away in the space of three or four years. Have you read books by Timothy Morton? They’re really interesting. His angle is that the apocalypse has already happened and we are now in the aftermath, so there’s hope for us. And I was like: I really agree with that. So let’s do something about it. One solution is to change how we relate to technology and how we relate to nature. There’s still a way.’

You had surgery on your vocal cords last year. How’s your voice holding up?
‘Since the operation, I have some of the high notes better than I have had for a while, but also I’ve got some deep notes that I didn’t have before. And I haven’t used them. I’d like maybe to do an EP just with the deep notes.’

And how about costumes – what are you planning to wear during festival season?
‘I like theatrical outfits. I think that hasn’t escaped anyone! And if there’s a time to get theatrical, it’s at a festival. Everybody knows it’s not about us; it’s about this other, shamanic, kind of liberating character that sleeps somewhere inside us that is dying to get out. And if there ever is a time and a place to air it, it’s a festival.’

Wilderness is at Cornbury Park in Oxfordshire, August 6-9. 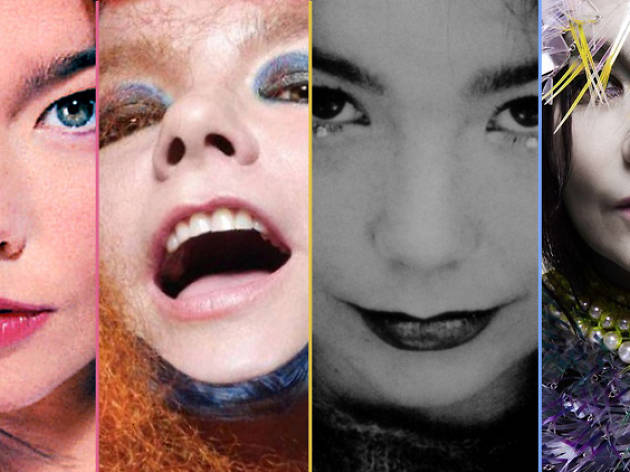 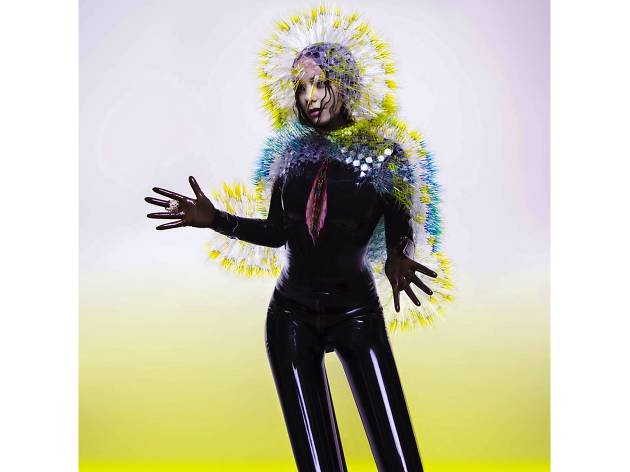 Rush-released after an internet leak, the new LP by Iceland’s greatest export is a break-up album like no other
Read review
Recommended