Disclosure first made a name for themselves in 2013 when they brought dance music back into the charts with tracks like ‘White Noise’ and ‘Latch’ – featuring their close buddy Sam Smith. Still only in their early twenties, brothers Guy and Howard Lawrence have already toured the world, hosted their own festival and are now back in the UK to launch their second album, ‘Caracal’, a record that proves that they are much more than just an electronic dance act. From downtempo garage tunes to upbeat R&B and house tracks,  Disclosure have created an exciting record that all started with a bit of tinkling about on an old piano.

When we meet in an office in Soho, Guy immediately puts me at my ease: ‘Don’t worry about the notes, they’ll soon be forgotten. We’re going to make this hilarious.’ He was right. Guy and Howard are normal twentysomething guys who want to have a laugh and do what they love away from the limelight.

What’s your songwriting set-up? What gets you in ‘the zone’?
Guy: ‘A single piano. That’s how it all starts. We’re pretty old-fashioned and traditional in that sense. Although we make dance music with lots of electronic equipment, most of the songs do stem from just sitting around a piano and writing.’
Howard: ‘We need the shit piano, though. Like the one at our dad’s.’
Guy: ‘Oh yeah, that one’s really shit. If you can make a song sound good on that, it must be an incredible song.’

‘Sam Smith gets up and dances around his room to “The Sound of Music”. So, not James Bond at all’ 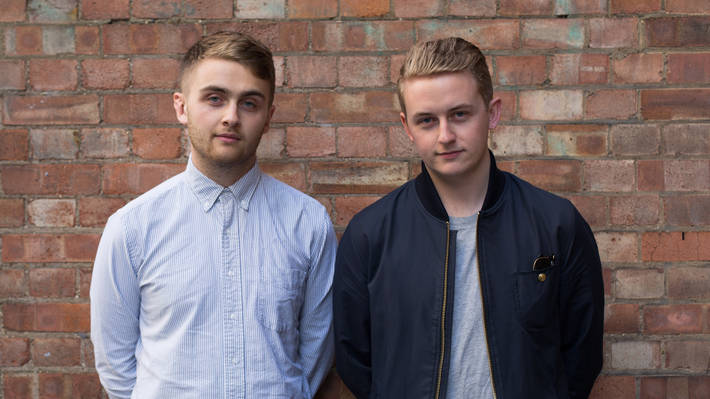 Sam Smith has finally announced that he is going to do the next James Bond soundtrack. Would he make a good Bond?
Howard: ‘Maybe. I think Sam does a lot of stuff that isn’t very James Bond-friendly.’
Guy: ‘Yeah. He was looking for a car to buy and his initial suggestion to me was a Toyota Jazz.’
Howard: ‘And he’s always relentlessly drilling Whitney Houston songs. Even if you don’t like them, he’s just: “Fucking like it!” I don’t think Whitney’s very James Bond.’
Guy: ‘No. I think James Bond gets up in the morning, chucks a girl out of his room, goes and kills a man, then has a mocha latte. Sam gets up and dances around his room to the “The Sound of Music”. So not James Bond at all.’

If you had to describe each other with an emoji, what would it be?
Guy: ‘I’d do the one where it’s like a dog and then a finger up the bum.’
Howard: ‘You can’t have two! That’s too X-rated… I don’t finger my dog.’
Guy: ‘Howard doesn’t finger his dog.’

Speaking of fingers, that’s a pretty massive ring you’re wearing, Howard.
Howard: ‘It’s a replica of the “One Ring” from “The Lord of the Rings”. It has the writing and everything. I’m a massive “Lord of the Rings” fan and when Sam Smith went out to where they filmed the Shire in New Zealand, he got me this for my birthday. It’s got to a point now where if I don’t wear it he’ll go mental at me. I didn’t wear it to the GQ awards and he had a big strop, so now I’m gonna wear it for ever.’

‘Finger up the bum. That would suck’ 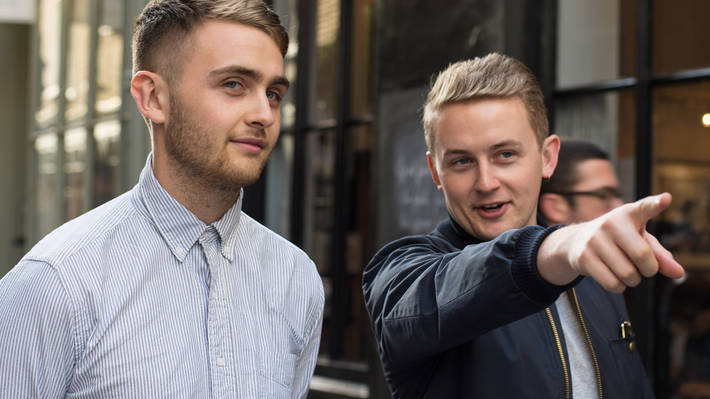 You’ve played loads of festivals in your time. Do you have any funny festival memories?
Guy: ‘We’ve got into a habit of trashing our dressing rooms quite badly at the moment. We have so much fruit on the rider, and it’s so chuckable that there are many fruit fights. They end up looking brutal. If you throw a strawberry at a white wall it looks like someone’s been killed.’
Howard: ‘Once we were in Ibiza playing with Rudimental and our dressing rooms were right next to each other, so we’d go in and try to assassinate them with fruit.’
Guy: ‘I remember throwing a lime at [DJ] Locksmith’s head. Like, serious impact.’
Howard: ‘After we played the show, I came back to the dressing room and felt really bad because one of Rudimental’s girlfriends was cleaning up our room. She was like, “They got your room messy…”’
Guy: ‘You should have seen theirs, mate.’

Have either of you ever crowdsurfed?
Guy: ‘I’m just scared. I’ve heard some horror stories about crowdsurfing: people getting their watches or phones nicked.’
Howard: ‘Or the ring, you’d have to be careful with that.’
Guy: ‘Finger up the bum. That would suck.’

How is ‘Caracal’ different to your first album?
Howard: ‘I think we’ve developed as songwriters, although we’ve tried to keep things sonically similar, because the sounds we use are kind of our identity as Disclosure. The development I’d say is in the speeds and styles of the songs: it’s much slower generally. There is still some house music on there, but there are probably more R&B-type tracks than house ones.’
Guy: ‘We don’t want to be associated with being a house act. We want to be an electronic act which does loads of different things.’
Howard: ‘I think that’s why it’s gonna be really hard for people to “genre-ise” us, if that’s a word.’

What’s the most random place you’ve ever played?
Guy: ‘Reno. I followed this dude to go get some food and his T-shirt said, “My Other Wife Is My Gun”. That’s what Reno’s like. He was bald, with a ponytail. That dude sums up Reno.’

‘We don’t look like pop stars, because we’re not’ 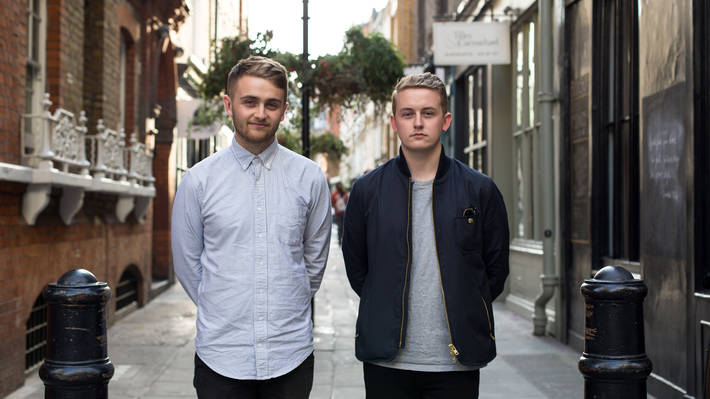 What’s the worst thing a critic has ever said about you?
Howard: ‘That we’re identical twins from Grimsby. That’s just incorrect.’

Have you ever been Twitter trolled?
Guy: ‘Oh yeah, sure, you get the occasional mental patient who’s escaped, but that’s normal though, isn’t it? It just happens. We’re not really in that world, to be honest.’

Describe your average fan.
Howard: ‘You know what, a lot of them look like us.’
Guy: ‘We’re just pretty normal-looking guys, I think is what he means. We don’t look like pop stars, because we’re not. We get recognised a bit more in America than here. In America, every single person wants to be your best friend immediately, but in London everyone walks around being a little bit more too-cool-for-school, which I kind of prefer.’

And how about age ranges?
Howard: ‘Sometimes we get whole families at our shows.’
Guy: ‘You’ll get kids who like it because they’ve heard it on the radio, and forty-plus people who say: “Your music reminds me of when I was going to the Haçienda.”’

‘Caracal’ by Disclosure is out on Friday September 25.

Hannah Ashraf, 23, is a social media executive. She interviewed Disclosure as part of the Time Out Takeover. Follow her on Twitter @Hannah_Ashraf. 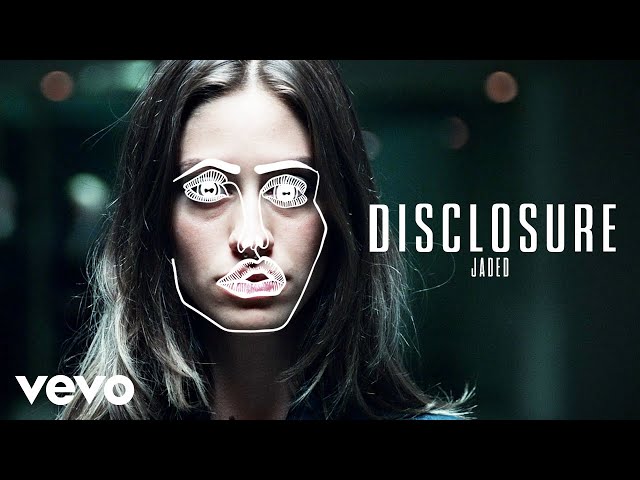