My Account My Profile Sign out
My Account
Search
Worldwide Europe United Kingdom England London Finally: a formula that works out how many people to roll with at a festival
Advertising

It's a question as old as time – well, as old as people have hired enormous PA systems and stacked them in fields for mass enjoyment: what's the right amount of people to hang with at a music festival?

Humans are social creatures, which is why hardly anyone goes to a music festival by themselves. Going to a festival with just one other person multiplies our fun in all sorts of ways – from having someone to share the experience with, to having someone to hold your stuff while you run to a sweltering plastic box generously called a ‘toilet’.

But as we all know, roll with a posse that's too big and you're likely to spend the whole weekend standing around, waiting. Waiting for someone to pee, waiting for your mate to find their friend from work, just... waiting.

I’m a mathematician, so naturally I concluded that there must be a formula to work out the optimum number of people you should go festivalling with. Introducing Parker's Formula for Festival Fun:

I plugged that formula into the widget below, so you can find out your optimum number of friends below by just answering two questions. Just tell us...

Matt Parker explains the working behind the festival formula.

Why did we ask those two particular questions? I’m so glad you asked – let's look at each individually.

1. How sociable are you?

There isn't going to be one answer for everyone. Some people are more sociable and will be happier in a bigger group; some people will have their enjoyment max out with only one other person.

To try and put a measure on this, I imagined how much fun I would have at a festival by myself and then compared this to being there with a friend. Taking the amount of fun I’d have on my own at a hypothetical festival as one Standard Unit of Fun, for me a friend adds one more Unit of Fun. For you they may add more or less, depending on how sociable you are.

Now the tricky part of using maths to imitate life: choosing an appropriate mathematical function. I needed a mathematical way to simulate the idea that there are diminishing returns for bringing more friends. A second friend brings something to the group, but not as much as the first did. I decided to approximate the second extra person adding half as much fun, the third person a third as much, the fourth a fourth and so on.

In maths the decreasing series 1/2 + 1/3 + 1/4 + 1/5 … is called the ‘harmonic series’, which feels hugely appropriate for a music festival. We now know how much fun we gain from having extra people in our festival group. But there’s a second, related question to answer…

2. How tolerant are you?

We need to calculate the pain caused by having too many people in your group. This depends on how tolerant you are to social inconveniences, which is the second bit of your personality you’ll need to quantify. Compared to the standard fun you would have on your own at a festival, how many minor inconveniences would you need to make it not worth bringing any friends at all?

The rate of pain is where it gets interesting. A few people cause only a few problems, but in a large group of humans the social problems seem to grow exponentially.

Let’s say my Fun Unit is equal to about 20 minor inconveniences, which we’ll express as β = 20. Your ratio may be β = 10 if you’re less tolerant than me, or it may be β = 40 if you’re a saint. Again using ’n’ to represent the number of friends, we’ve now got a formula to represent FRIEND PAIN:

We can now put our two formulas together to get the net total fun for having ’n’ friends with you.

I plotted this fun equation on a graph to plot the net fun I would have for different values of ’n’. The horizontal axis represents the number of friends in my crew and the vertical axis represents how much fun I’m having. Pretty rock ’n’ roll, eh?

You can see that for me, the maximum fun occurs when I am with four friends, at which point I’m having over 250% fun! Interestingly though, I can roll with up to ten extra people and my fun is still above where I started: 10 is my maximum group size. In a group of 11 or more, I’d be better off walking away and having fun on my own. By the time we get to 13, I’m actually having negative fun.

Using the formula and the calculator above, you should now be able to work out your ideal group size to maximise your enjoyment at this year’s festivals. If you just want to use the formula, don't forget to pack a solar-powered calculator. 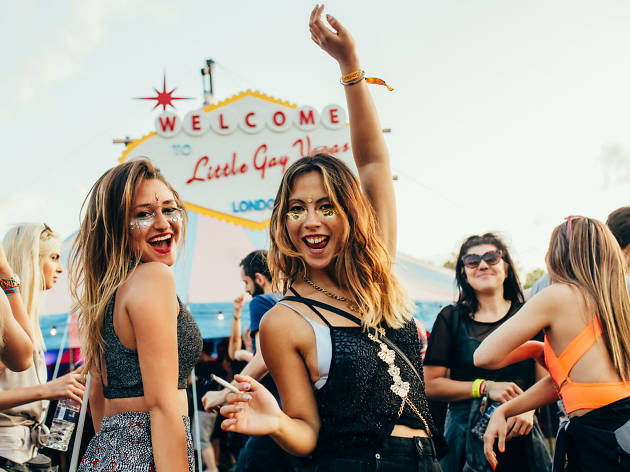