The 13 best restaurants in Lyon

From Lyonnaise specialities in cosy bistros to Vietnamese family restaurants, these are the best places to eat in France’s food capital 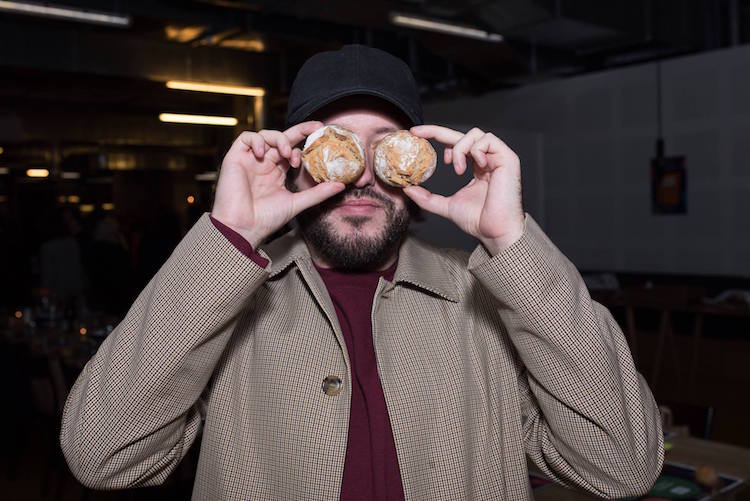 Often dubbed the gastronomic capital of France – and sometimes even of the world – Lyon and its residents are no strangers to good food. There are more restaurants per head in the southeastern city than in any other in France, and it plays host to no fewer than 15 Michelin-starred restaurants. As if that weren’t enough, Lyon is world-renowned for its regional produce: chicken from Bresse, Charolais beef, unctuous cream and butter so rich you could weep into it. 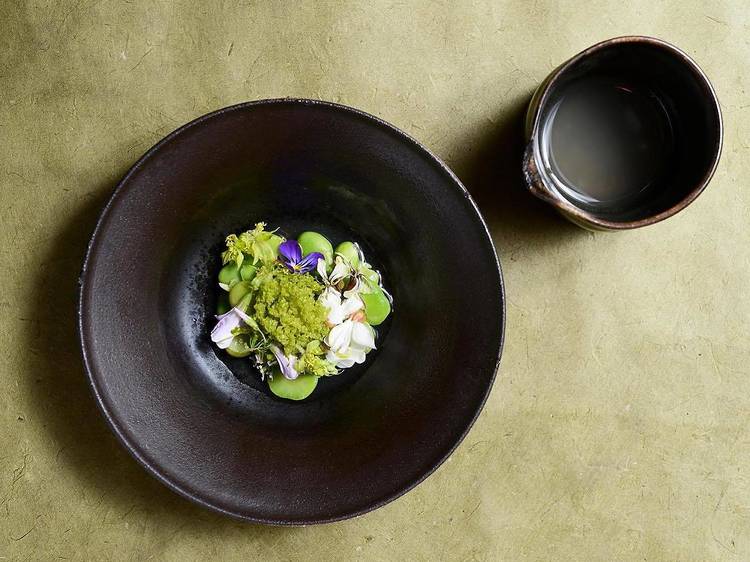 The owners of Les Apothicaires are a chef couple – Tabata and Ludovic Mey – who met while working at one of the legendary Paul Bocuse’s brasseries in Lyon. Their restaurant has a reputation that extends far beyond this gastronomic city, and despite earning its Michelin star in 2020, it hasn’t lost any of the homely, casual feel: a former library, the space is dotted with jars, cookbooks and vintage objects. The globetrotting menu shows off Latin American and Scandinavian touches, with dishes like grilled red mullet, Meyer lemon reduction, and porcini mushrooms, and butternut with clementine sorbet, maple syrup and pumpkin seeds. The wine list is a mix of on-trend biodynamic bottles and regional vintages, served by a chatty sommelier team. 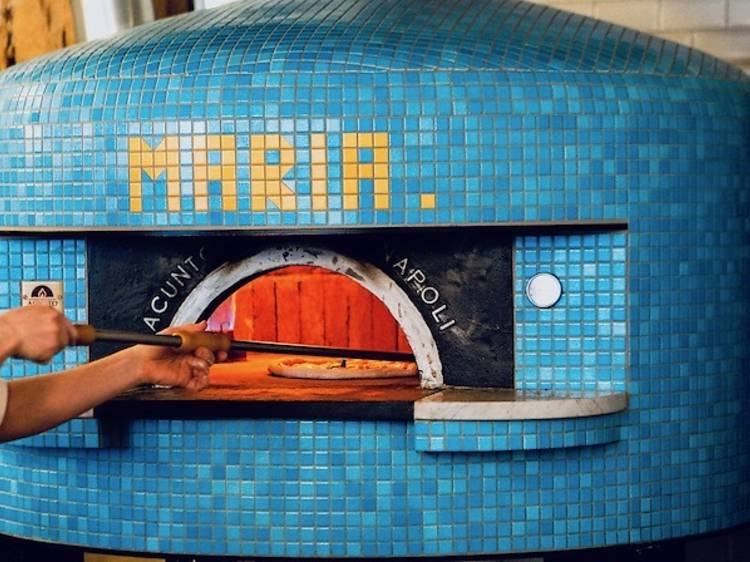 Pulling fresh pizzas from a giant turquoise mosaic oven, Maria is a buzzing Croix-Rousse spot you won’t want to miss. The menu comprises eight wood-fired pizzas, all of which pack a serious Neopolitan punch. There are classics like the La Sanita – San Marzano tomatoes, fior di latte, grana Padano, fresh basil, and extra virgin olive oil – or more adventurous blends like the Mergellina: Provola cheese, fior di latte, fennel sausage, cream of broccoli with ricotta and walnuts. Each week, staff design a new pizza, so come with a group and try as many as you can. 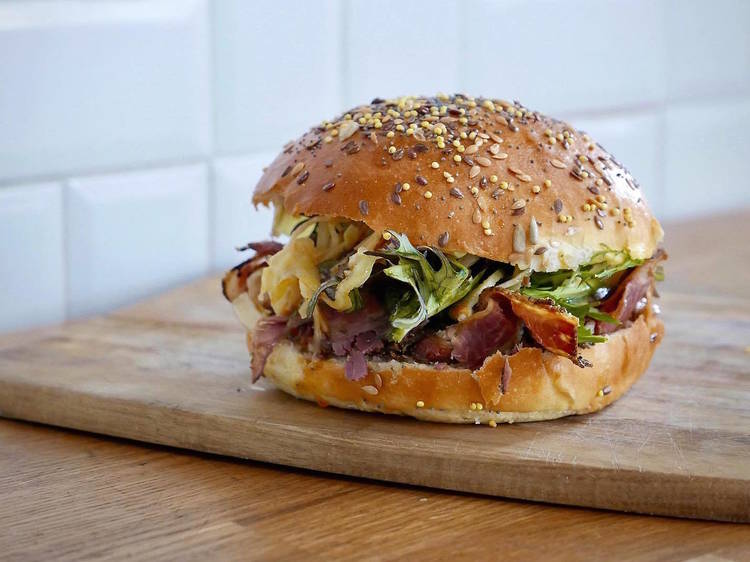 Neighbouring her husband Xavier’s Ravigote, Marie-Laure Radojewski and her team whip up some of the city’s best sandwiches. Adorned with retro school furniture and her grandmother's porcelain, this sunny canteen offers a serious lunchtime lift. The house speciality, Le Ravigote, is made of Charolais roast beef, ravigote sauce, beetroot ketchup, pickled red onion and salad in homemade pumpkin seed brioche. A twist on the croque monsieur includes roast pork, smoked raclette cheese, béchamel and confit onions in sourdough. (Don’t worry, vegetarians: there’s plenty of choice for you too.) For €12 all in, get a sandwich, a soft drink and a dessert such as chocolate chip babka, crème caramel or rotating specials like chocolate peanut pie. You can also buy cheeses and charcuterie from Marie-Laure’s stellar suppliers – though you’d be pushed to make sandwiches this good at home. 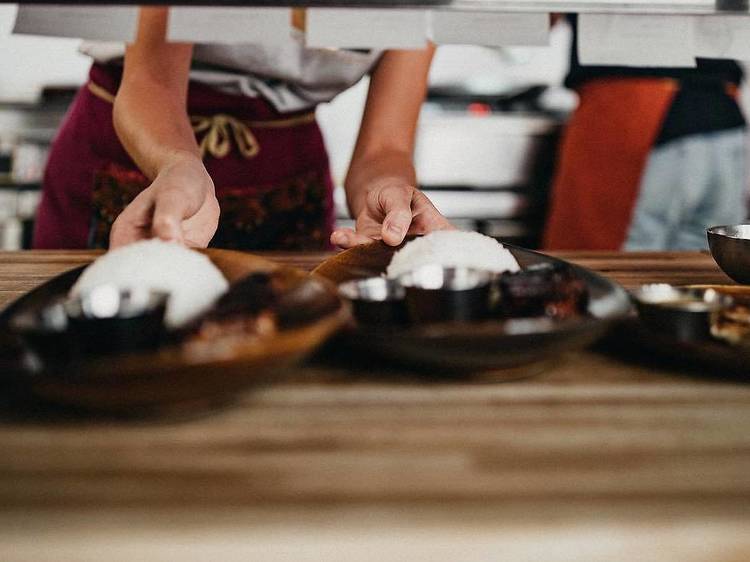 While living in Kuala Lumpur, friends Amélie, Caroline and Paul discovered the incredible mix of Indian, Chinese and Malay cultures that make up Malaysian cuisine. They returned with the dream of opening their own Sino-Indian mamak street food spot in Lyon. Boleh Lah is the realisation of that dream. Under purple neon lights, the open kitchen bustles to a hip hop soundtrack as diners perch on stools to enjoy a short but perfectly formed menu of dishes like beef rendang, char siu pork and vegetarian nasi goreng. Start off with a flaky, buttery roti flatbread – plain, cheese-filled or garlic – to dip in dhal curry sauce, then order as many plates as you can. Even better, come with a group to try everything. For the caffeine heads, don’t miss the teh tarik: a sweet and frothy pulled milk tea. 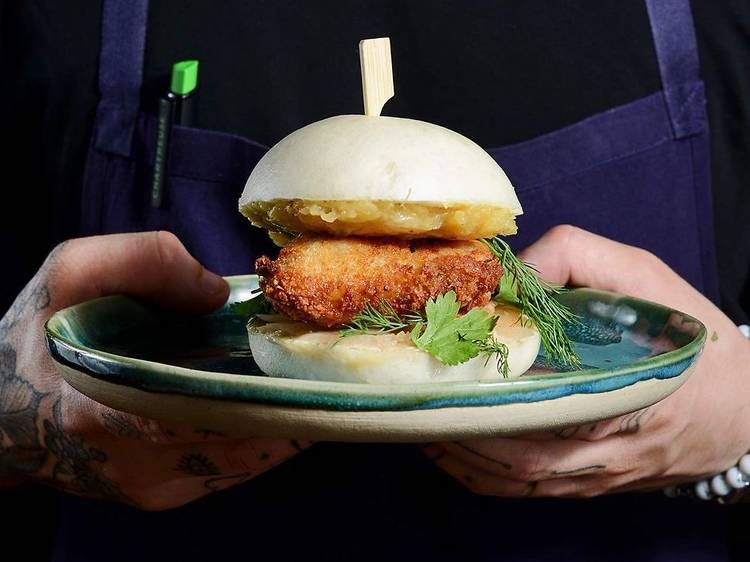 Located in the 1st arrondissement between the Halles de la Martinière and the Mural of Lyonnais, is chef Arnaud Laverdin’s casual Asian-fusion bistro. Meaning ‘dream’ in Hindi, the globe-trotting menu of Sapnà will certainly transport you away from southeastern France. Mix up small plates like smoked trout gyoza, lamb satay bao burger and Okonomiyaki with Katsuobushi and bacon. Always leave room for dessert though - pastry chef Rémy Havetz works on a regularly changing selection for the patisserie bar. With exposed brick walls, mauve velour banquettes and touches of pine green, it’s the kind of space you’ll want to linger in long after your last forkful. 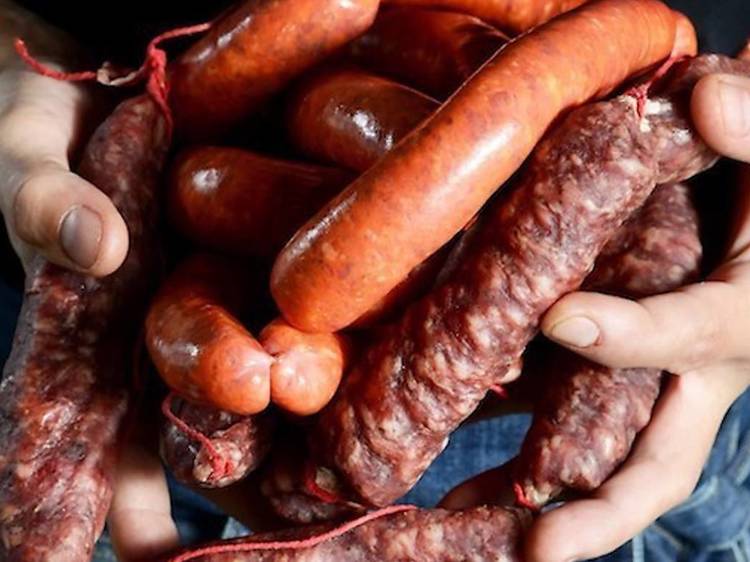 6. SO6 La Saucissonnerie at Cabane

After the success of his Croix-Rousse neo-bistro Substrat, Hubert Vergoin has done it again with Cabane: a wine cellar-meets-café just across the street. It’s diminutive in size (a Parisian studio comes to mind) with teal blue walls and just a few stools for perching on, so it gets rammed at apéro time. But if you’re here to eat, look out for the SO6 La Saucissonnerie events, which are listed on Instagram. These one-off nights gather together Lyonnaise chef talent for menus that pay tribute to wine, good times and – of course – sausages. There are always a few porky specialities: the hot dog with fried onions and piccalilli sauce is formidable. As for wines, it’s all natural. 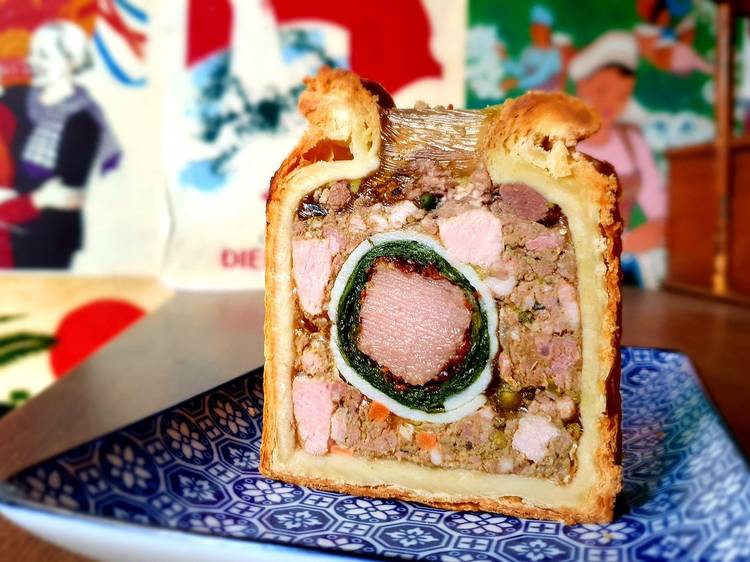 Run by Mum Huong and her daughter Nhung, Mamasan is a neon-lit canteen serving Vietnamese and Laotian cuisine you’ll keep coming back for. Cooking recipes here have been handed down through generations, while the chefs are accompanied by a team of friendly staff, most of whom are in the family. The spring rolls, pho, and bo-bun, made with beef strips from the nearby and stellar butcher Maison Bello are particularly special (most ingredients are from local producers and artisans). It would be rude not to accompany it with a Bia Saigon Export beer.

Leave your interiors yardstick at the door because this seventh arrondissement spot is anything but polished. With decor that’s more grandma chic than grandeur, the dining room of En mets, fais ce qu'il te plaît is unassuming, with dishes that far belie it. Chef Katsumi Ishida cut his teeth in the kitchens of Joel Robuchon and Alain Ducasse, falling in love with French gastronomy in the process. Expect classics with a twist such as Bresse chicken with foie gras sauce, duck breast with cherries and sole with lobster sauce. This is bistronomy at its best (with a natural wine list to boot). 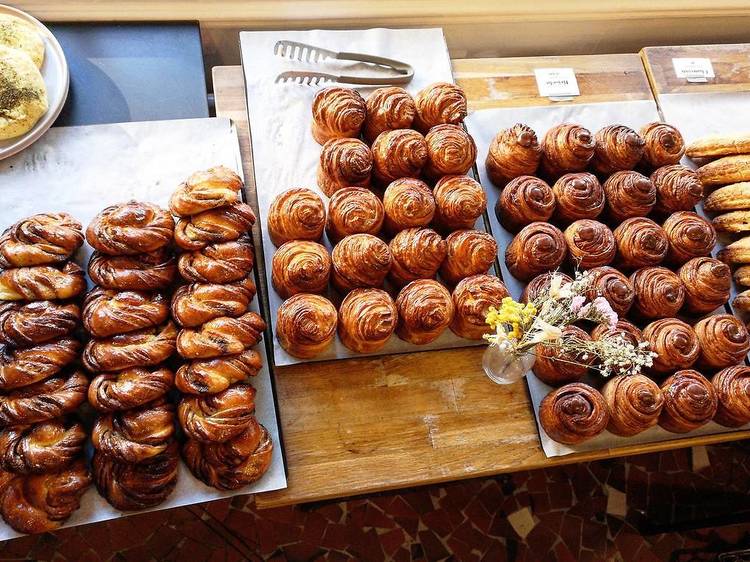 Within spitting distance of Louis Lumière and Jean Moulin Universities, Kitchen Café is a daytime spot favoured by students, locals, and out-of-towners alike. Choose between its sunny terrace or Art Decor-meets-Scandi dining room to enjoy generous helpings of Connie Zagora and Laurent Ozan’s ultra-fresh, seasonal fare. Both graduates from Ferrandi, the French school of Gastronomy, flavours are gourmet, but reasonably priced. The menu changes daily, but expect dishes like tuna tartare, beans and preserved lemon, and for afters, a spectacular dessert and patisserie bar. We’re still dreaming about Kitchen Café’s cinnamon and cardamom brioche. 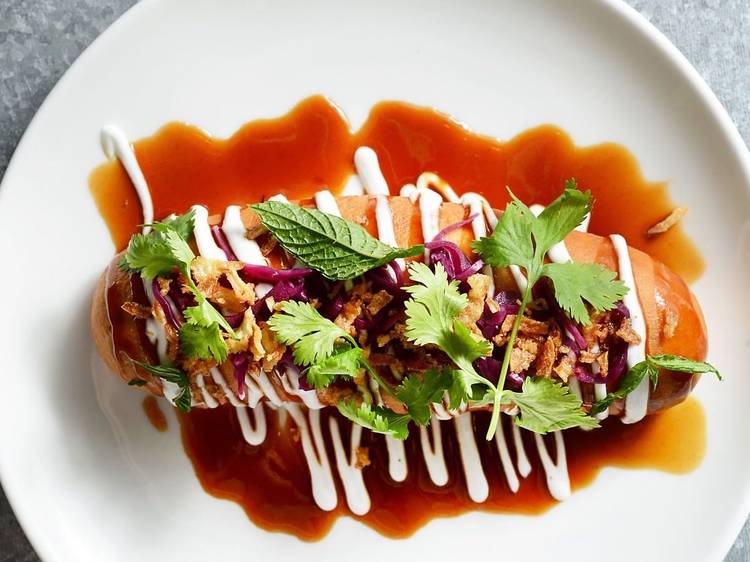 After shaking up the sixth arrondissement with Les Apothicaires, Tabata and Ludovic Mey are fast becoming Lyon’s favourite foodie couple. Their latest concept, Food Traboule is a food court hidden in the historic Tour Rose (Pink Tower) that offers the very best of the city’s food scene. A dozen restaurateurs are gathered in the 660 square metre space, all of whom share a desire to have fun around experimental gastronomy. Ensure to book in advance as it gets busy – and try as much as you can when you’re there. Our must-haves? Octopus arancini from Comptoir des Apothicaires, Substrate’s steamed buns and Lobsta’s Maine Lobster roll with lobster, prawns, marinated white cabbage and pickled radish. Prepare to roll on home. 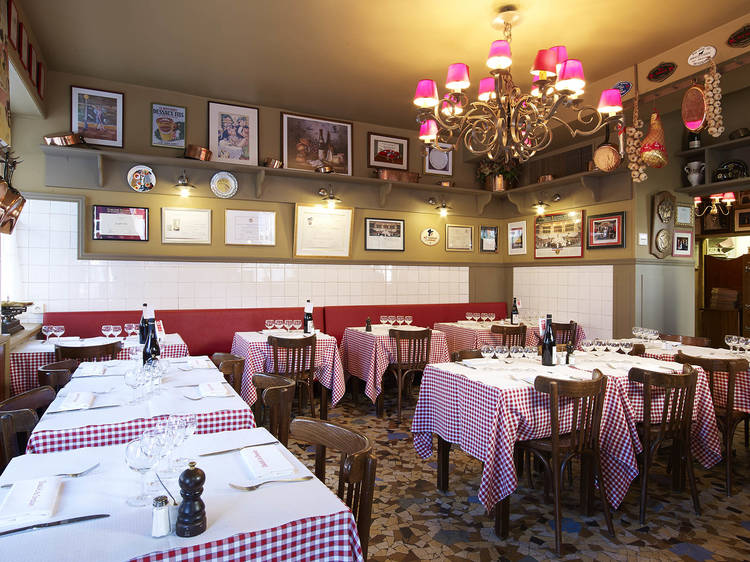 Formerly a butchers and sauerkraut shop, Daniel et Denise has been a typical bouchon since 1968, with copper warming-pans, wood panelling, and gingham tablecloths. Chef Joseph Viola’s cooking straddles tradition and modernity, with signature dishes including calf head with ravigote sauce, Bresse chicken with morel mushrooms and pike quenelle in crayfish sauce. Unlikely to be a hit with vegans and vegetarians, it’s a veritable carnivore’s heaven – the award-winning foie and sweetbread pastry has no less than 20 ingredients. Dishes are quite literally to die for, while the service, under the watchful eye of wife Françoise, is both attentive and thorough. 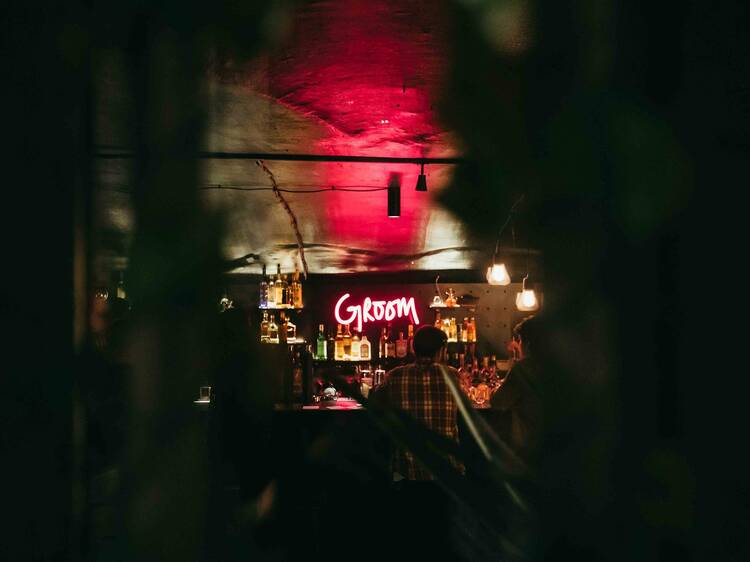 Groove on down to Groom, a basement cocktail den hosting an excellent line-up of bands and DJs throughout the week, from swing and indie rock to funk and jazz. It’s 80s-style neon bar is well-stocked with an exciting array of spirits, wines, beers on draught (like Orbital’s Archi IPA and the sake-infused B7 Panda Bear). On the cocktails side (€11-13), expect concoctions like Groom Libre, comprising Dark plantation rum, pear brand, ginger ale and cocoa bitters, or Bisous, a mix of mezcal, vermouth, green chartreuse and Empirical Spirits’ Ayuuk (based around Pasilla Mixe, a smoke-dried chili pepper). There’s plenty of non-alcoholic choices too: think Leamo mate, Chilled CBD and several alcohol-free cocktails. You won’t go hungry either, as there’s a bar menu of empanadas, charcuterie and cheeses. 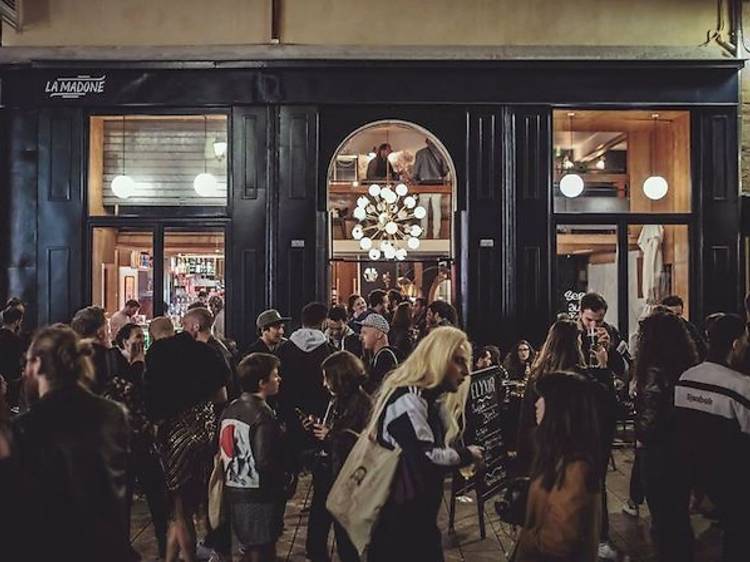 With its checkerboard floor, modernist furniture and brass chandeliers, La Madone could easily have dropped straight out of a David Lynch film. In fact it’s housed in a former rectory in La Croix-Rousse, hence the Biblical name. The main event is booze: beers from the Georges brewery and stunning cocktails based around forgotten spirits like Lillet and Byrrh. But it’s worth a visit even for non-drinkers thanks to the atmosphere and its platters of cheese, Italian charcuterie, and grilled vegetables, best enjoyed on the top terrace. With the owners being former DJs, La Madone’s soundtrack is always on point, from early doors to late in the night.