Dominating the plaza in front of the National Museum of Art is the equestrian statue designed by the illustrious architect for which this space is named: Manuel Tolsá. Better known as “The Little Horse” it features Carlos IV of Spain on his steed, a piece has wandered half the city: First in 1803 when it stood in the Zócalo; later in 1822 when it was given to the university to save it from the anti-Spanish fury which predominated after the Independence; later in 1852, once tensions had been calmed, it was moved to the suburbs, to what is now the intersection of Paseo de la Reforma and Bucareli.

In 1979, it was transported to its current location, where it fits in perhaps best of all. At the same time, Sebastían the sculptor, substituted the New Spanish horse for his most famous work, the yellow structure also called Caballito. It’s safe to say that had a thing for horses.

The building behind the statue is the old Palace of the Secretary of Communications and Public Works, designed by Italian architect Silvio Contri, who began its construction in 1904. On the inside, it opens to a beautiful staircase whose marble steps show the footprints of time. There’s also impactful, French-influenced marble sculptures in the vestibule, such as the famous “Malgré Tout” (“Inspite of it all”) by Jesús Fructuoso Contreras (1882-1948), that represents a young, naked woman in chains, being dragged on the ground or the scandalous “Après l’orgie” (“After the Orgy”) by Fidencio Lucano Nava (1869-1938), depicting a young nude woman reclining, and suspending in the marble.

The museum’s collection is vast and includes all types of work from the viceroy era to the middle of the 20th century.

The last Wednesday of each month, the National Museum of Art opens between 7-10 p.m. for the working people to get a chance to tour.

Written by FSSunday May 6 2012
FacebookTwitterPinterestEmailWhatsApp 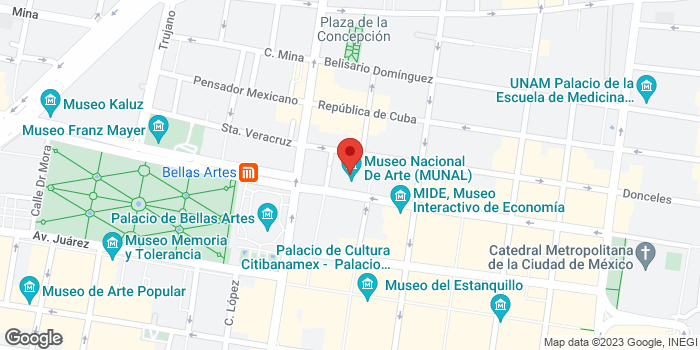