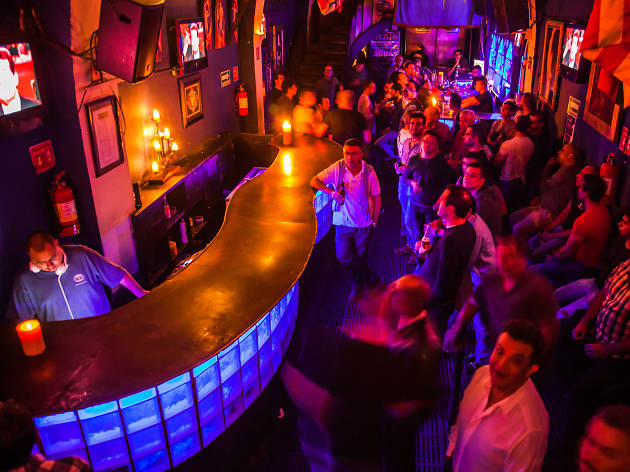 Mexico City is the capital of extravagant and exciting gay clubs and bars which, throughout their history, have reflected the crazy nightlife of the city. 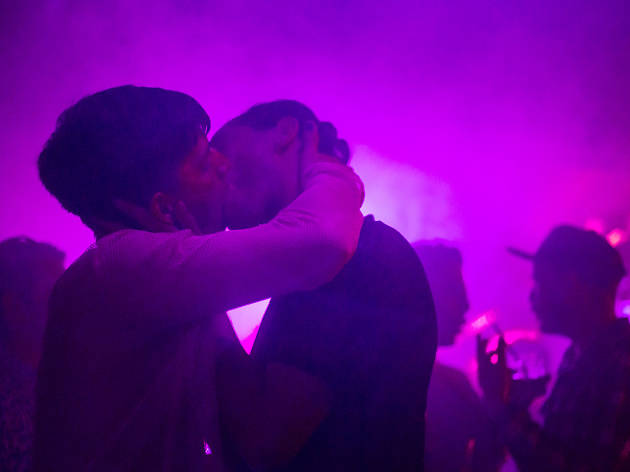 Mexico receives about 3.5 million visitors per year who are part of the LGBT community, many of whom make a beeline for Mexico City. It’s not difficult to see why. 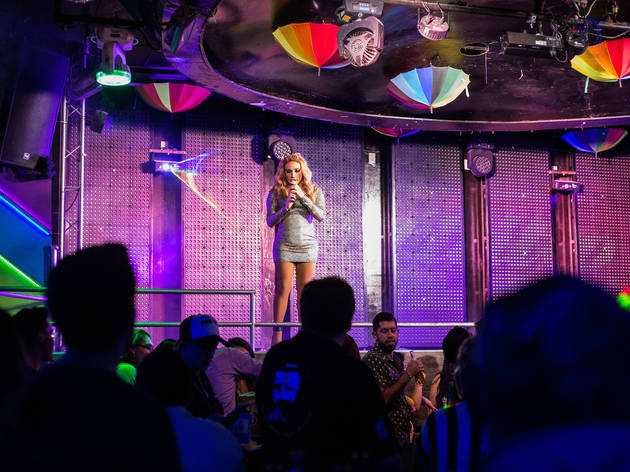 Fusion is already a Zona Rosa smash hit. It’s got everything for everyone, three different dance floors with different music; electro pop, ensemble, and karaoke. Saturday nights tend to be the busiest, because at 10:00 pm the most handsome and daring strippers in the city appear, and towards midnight everyone starts to sing along with Marisela, Ana Gabriel and Ninel Conde. Here beer is king because throughout the night they run different promotions ranging from longnecks. at 10 MXN, up to 200 MXN buckets, and if you want to share with your friends, there are bottles starting at 500 MXN. They’ll also occasionally organize concerts with relatively well-known artists like, Lorena Herrera, Amandititita, María Daniela and her Sonido Lasser or Jessy Bulbo. Pro tip: Get here early and avoid paying the cover. 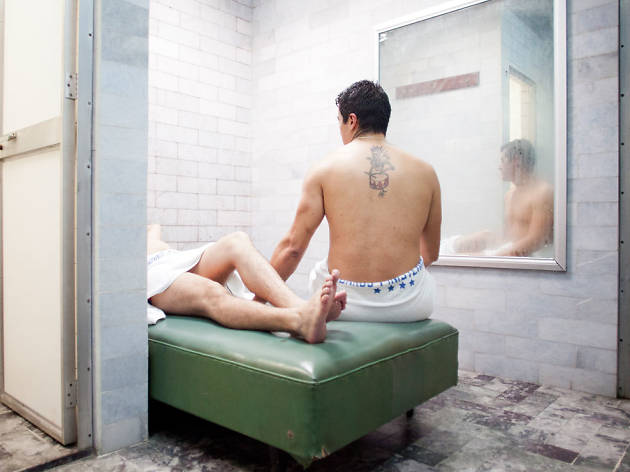 This is a Mexico City staple. This spot will be poppin’ virtually any night of the week although the most movement (literally) can be found on Saturdays and Sundays at around 8:00 am because the Finisterre doubles as an afterhours spot for when the gay clubs close their doors. Men of all ages, sizes, complexions and professions frequent the Finisterre and a good part of them walk around naked. The staff is why this bathhouse is so popular, they’re older but, supremely kind to the gay communities. That bit is particularly interesting because this place started out as a family-friendly place and ended up as the preferred rendezvous point for gay men and most of the staff was around to watch the transformation. The massages are majestic, and we can’t recommend them enough. They serve a dual purpose, they help keep the adrenaline in check and ease the hangover at the same time. 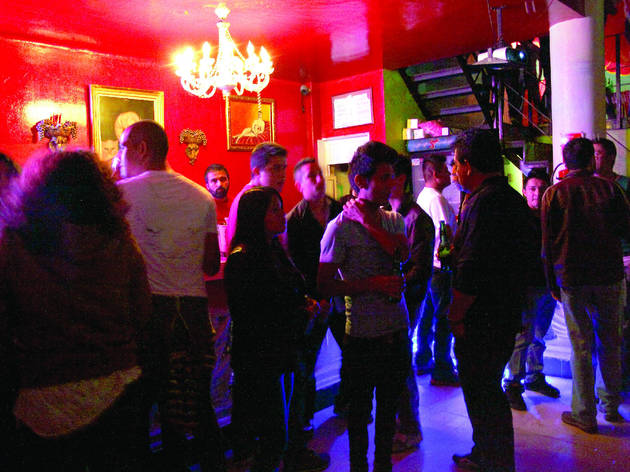 In a very real way this kitsch-retro cabaret/gallery is responsible for turning República de Cuba street in the Historic City Center into an alternative to the usually poppin’ Zona Rosa LGBT neighborhood. And this alternative is legit. Even though you’ll still catch them playing Katy Perry and the pink overload is in full effect, you’ll also hear them blasting Radiohead and The Pixies throughout the night. “They have to,” says Victor Jaramillo, one of the owners of this gay club that stands alone in that it makes sure it has a unique flavor to it. Unlike many gay clubs in Mexico City, Marrakech Salón doesn’t play into the typical gay stereotypes that have plagued Mexico for so long. Here, the idea is to have fun and be able to laugh at oneself - something that’s not all the common in the LGBT community. This spot is different even if just for the location. It’s on one of the less polished streets in downtown Mexico City. However, as night falls, the neons that adorn Marrakech illuminate the surrounding crumbling buildings in a way that’s almost glamorous. There’s no cover, no doorman, no velvet rope. Just a security team and a metal detector that, in tandem, make sure that people aren’t carrying anything that may jeopardize the safety of the clubbers inside; they’ll check your backpack or purse and that’s it, in you go. Once inside, the roof is a few feet taller and it will be crowded. If you get here after 10, get ready to have to muscle your way to the bar. Once you mak 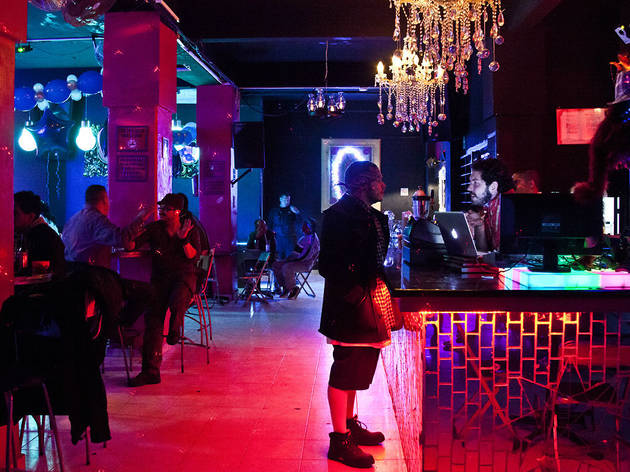 La Purísima could be the disco version of Marrakech. Given the success of "Marra", as the regulars call it, the owners decided to open a second space. This one is the opposite, much wider, darker, designed especially for dancing and making out under strobe lights. Before entering, a spectacular phrase framed in lights welcomes you with the only entry requirement: "Pare de Sufrir!!" (Stop suffering). The walls are black with crimson highlights and pictures that are far more pornographic than pure. There are also tables and armchairs along with a stage for the muscle-bound strippers to grind on. The funniest and most politically incorrect are is the bar. There is a mirrored wall adorned with busts of the Virgin Mary; the namesake of the club “La Purísima.” The Basilica de Guadalupe in Mexico City doesn’t even have this many Virgin Mary’s. There is one tiny gripe: even this spot couldn’t make the miracle of gays listening to actually good music happen. There comes a time every night where the most stereotypical pop in all of Mexican LGBT, Gloria Trevi, starts blaring. It’s a bummer because most of the night there is good house and pop music playing. Either way, we’ll put up with the occasional Gloria Trevi for the size of this dance floor alone. 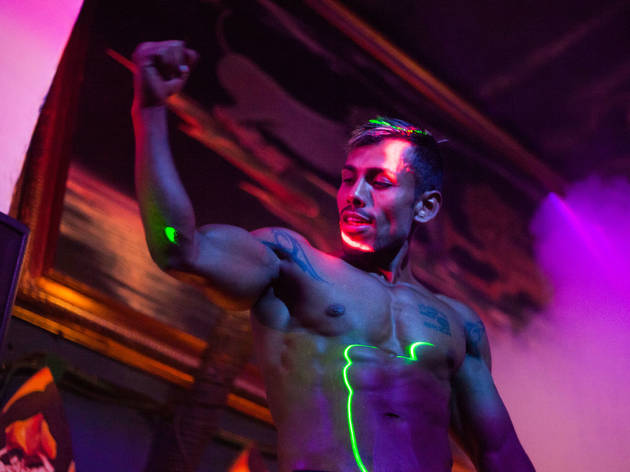 Everything is fair game here: drinks, fun, hookups, porn, and even sex. The reason? You absolutely must traverse their famous “dark room” to get to the bathroom. There’s no other way. So, let that serve as a warning (or an incentive) that you will end up in the “dark room” at some point or another during your time here. It’s located through a non-assuming door on Insurgentes Avenue, just before Michoacan street. For many, this spot is well-known but, for the younger crowd (24 and under), it might look like a northern Mexican cantina because of the double doors at the entrance. Tom’s has already cemented its classic status and it’s not been easy to replicate it anywhere else; neither it’s vibe or the grabassery that goes on in here. It’s the only one of its kind to survive the late 90s as a pioneer of the idea that men could be daring and exhibitionists while dancing and hanging out. It’s not the same as places like Taller, on Florencia Street or La Estación on Londres in the Zona Rose (Red Light District). Inside there are intensely high ceilings with gothic-style beams. The decoration is not unlike the set of Gladiator – the Ridley Scott movie – but, with suggestive paintings of men mounted on golden frames. The lighting consists mostly of dimly-lit lamps and chandeliers. The layout is that of a long hallway with two bars at each end with metal drink holders and stools scattered throughout. It’s not easy to grab a seat since there are few stools and they’re usually occup 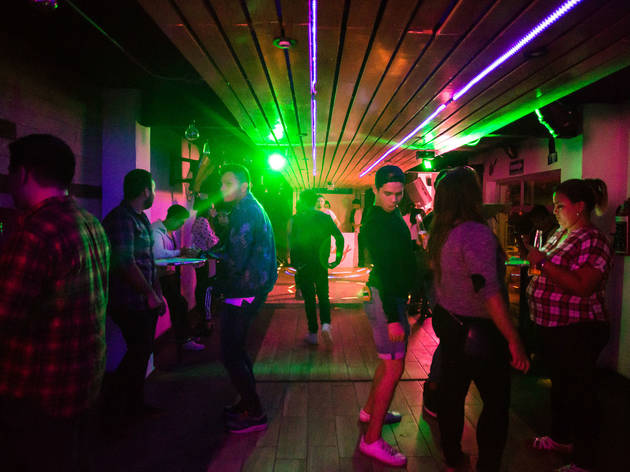 Baby just opened its doors on Londres street, just a few steps from Insurgentes avenue. The policy here: keep it simple. A lax door policy and a noble cover of 50 MXN grants you access to the ultra-wide dance club decorated with pink neons and hardwood floors. They play top 40 music videos, have unicorn on the walls, and play reggeaton with pop hits mixed in -  hip-shaking encouraged. Although, from time to time they’ll play more obscure hits much to the chagrin of the millennial crowd. Baby can be summed up easily, cheap drinks and refreshing. The staff is friendly, and the spot isn’t ostentatious. Beers run 20 MXN and mixed drinks are 70 MXN. People are basically programmed to flirt here. Even though there are more girls than at your average gay club. Fun side note: we watched a couple of Voguers dance battle; that was worth the price of admission alone. This spot is a great place for no-frills fun and the only seating is on the terrace, which is also the smoking area. 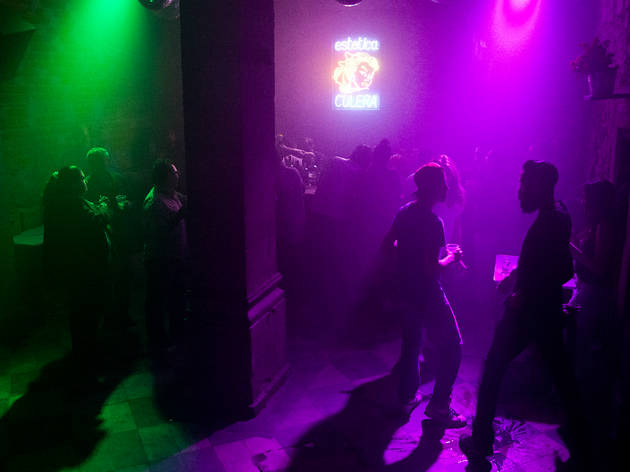 From the group that challenged the LGBT community to step out from the Polanco and Zona Rosa (Red Light District) neighborhoods comes a sequel to their mega success flagship, Marrakech 2.0. This place cozies up on Filomeno Mata street downtown; a street that bustling but, a bit crowded. Needless to say, that as soon as this place opened its doors, it became a huge success – on weekend afternoons, the place is totally packed. Víctor Jaramillo and Juan Carlos Bautista, owners of Marrakech, don’t even try to hide their happiness, they really wouldn’t even have time to try. Marrakech 2.0 is a cozy tavern with high ceilings and tables extending all the way to the sidewalk. The interior carries the tradition of hanging pictures of irresistible men and visual of homoerotic and lesbian art uninhibitedly. It's not just a bar. If you walk to the bathrooms, you find a hallway with thick black curtains. Behind is a patio with a small stage which serves as a DJ booth. They even have totally politically incorrect phrases on the exposed concrete walls. The dance floor smacks of a fancy quinceañera, a perfect setting for a long night of grinding and popping to the eclectic musical selection, which ranges from Gloria Trevi and Beyoncé to the Pixies and Lana del Ray. The new Marrakech is wider than the original and it maintains the cheap drinks, no cover, and no doorman policies. Lest, anyone get the urge to discriminate. 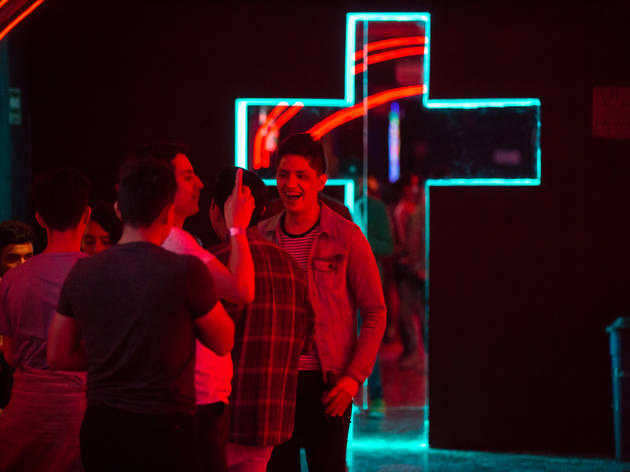 La Purísima could be the disco version of Marrakech. Given the success of "Marra", as the regulars call it, the owners decided to open a second space.... 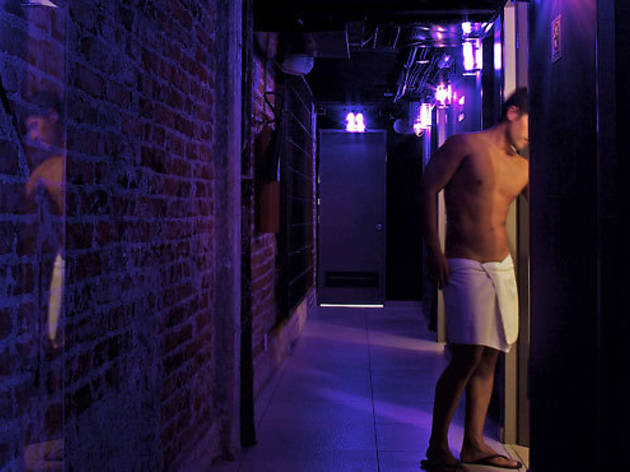 Back in 2013, there was an assault here that caused a few setbacks. After the reopening, everything was much better. Today, Sodome is as place where men walk... 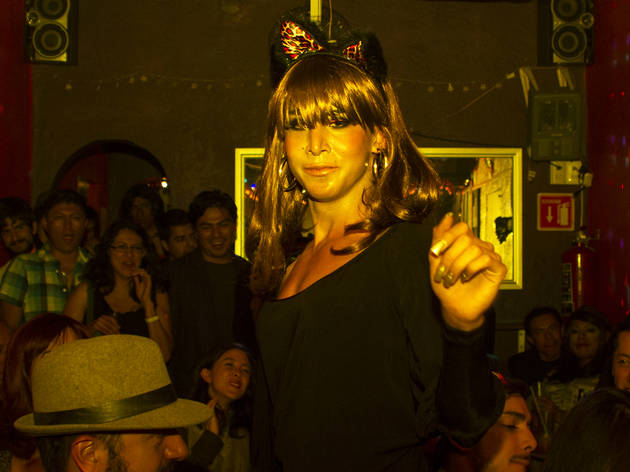 This place is all about drag. Period.Ran by the beloved Roshell, perhaps the activist who has fought hardest for transvestite, transsexual and intersex...

This is a Mexico City staple. This spot will be poppin’ virtually any night of the week although the most movement (literally) can be found on... 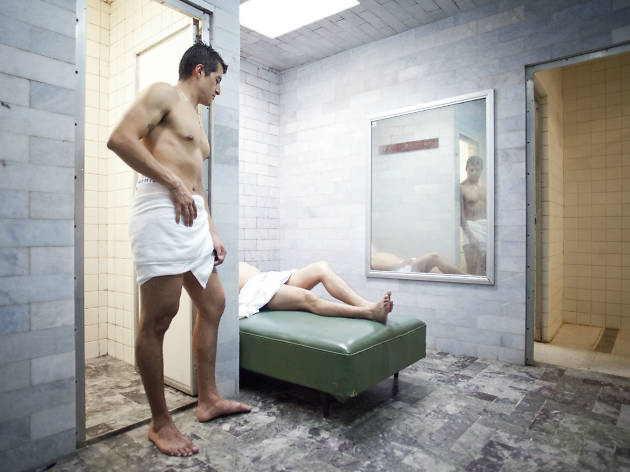 Situated in the historic city center, Baños Señioral is famous for two things: their cleanliness and their facilities. Most of the bath houses...