From a pessimistic view, the Palace of Fine Arts is an architectural Frankenstein. Optimistically, it’s an eclectic architecture building. In a purely functional way, it is a catalogue of fine marbles of all kinds.

But we're being ironic. Obviously, it is one of the most important monuments in the capital, that together with the city’s other “palaces:” made up of government, mining sports and even a famous department store, have earned the very noble and very loyal city the nickname, “City of the Palaces.”

Its construction began in 1904 during the Porfirio Diaz dictatorship, and its interiors were designed in the decades after the revolution. Its design runs from the Afrancesado neoclassicism of its 19th century facade, to the Art Nouveau of its concert hall with its gigantic stained glass that serves as a curtain and weighs 24 tons. Not to mention the vestibule’s impressive Art Deco construction. Add on its newest editions from the 1980s and we have a picturesque panorama of architectural styles, to say the least. The initial design was by Italian architect Adamo Boari (1863-1928), and was completed in 1934 by Mexican Federico E. Mariscal (1881-1971).

Inside, there are several exhibition halls for plastic arts and history, and dominating its walls are some of the most imposing murals of the greatest Mexican Muralists: Diego Rivera, David Alfaro Siqueiros, José Clemente Orozco, Roberto Montenegro and Jorge González Camarena.

The palace’s theater is a forum for excellence and features performances by the Fine Arts Opera and the National Symphony Orchestra, which always offer an interesting cultural expression of these universal arts. 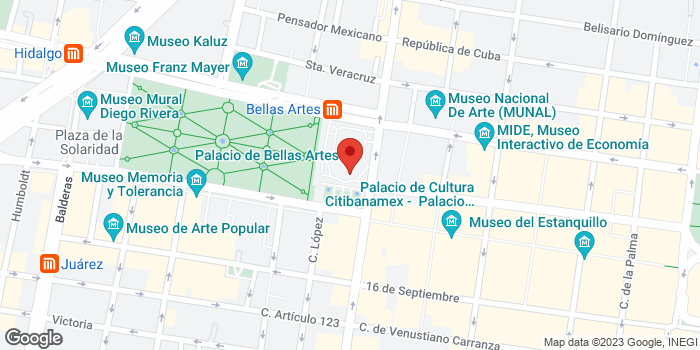