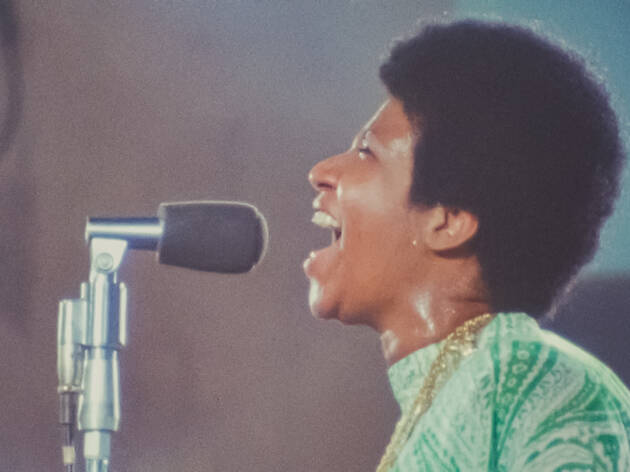 Dazzling and stirring, this close-up of the Queen of Soul will have you up on your feet.

You’d have expected footage of a peak Aretha Franklin powerfully singing gospel to be protected at all costs. However, the singer’s intimate 1972 show, filmed over two days at a Baptist church in the Watts neighbourhood in Los Angeles, was fumbled by famed director Sydney Pollack (‘Tootsie’, ‘Out of Africa’). He failed to properly archive the filming, which resulted in audio and visual footage that didn’t sync and a film that never saw the light of day.

‘Amazing Grace’ is the result of music producer Alan Elliott and editor Jeff Buchanan remedying this issue by spending hundreds of hours in an editing suite fixing Pollack’s mishandled footage. And their sacrifice is worth its weight in gold, with the result being one of the best music documentaries of recent times.

Backed by the Southern California Community Choir, who are each bizarrely dressed in silver vests that look like the inside of a crisp packet, and conducted by the enigmatic Rev James Cleveland, who fights back the tears as he watches Franklin hit frankly outrageous high notes, this documentary captures the Queen of Soul at her purest. It will make even the biggest atheist want to shout out ‘Yes Lord!’ from the back of the cinema – something that happened three times in my screening.

One of the best moments in ‘Amazing Grace’ captures Franklin as she struts through the church in a fur coat, a sparkily confident blueprint for the modern pop diva. Another brilliant sequence shows her forcefully instructing one of the musicians to start over, her pursuit of perfectionism absolutely riveting to observe. Look carefully and you can even spot a 28-year-old Mick Jagger in the crowd, dancing along like your dad after one too many mojitos.

Watching Franklin drip with sweat while cathartically belting out the songs her pastor father taught her as a child is a transcendent experience, as her stirring voice somehow makes you lose control of your arms. During her poignant rendition of old gospel classic ‘Where We’ll Never Grow Old’, there’s a sense she’s channelling the Civil Rights Era struggle of African Americans into her vocals, which move from joyous to melancholic in a way that will make the hairs stand up on the back of your neck.

‘Amazing Grace’ is the kind of music doc you won’t be able to stop thinking about, and at a time where the news reads like a literal nightmare, it’s a light you should let into your life.