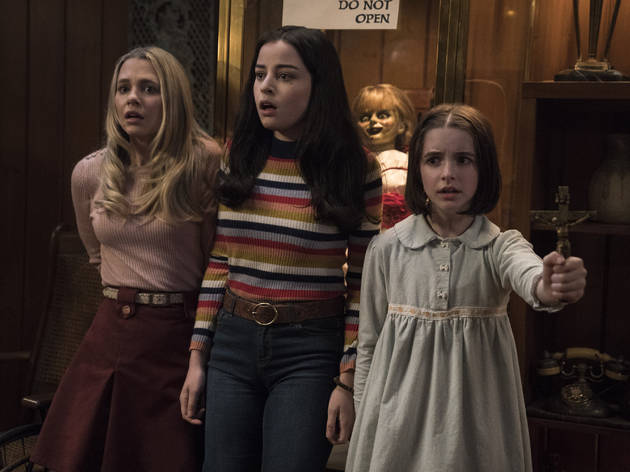 When the doll has more vitality than the movie around it, there's a problem.

The Warrens – Lorraine (Vera Farmiga) and Ed (Patrick Wilson) – don’t scare easily. Even if you haven’t squirmed your way through the first two ‘Conjuring’ movies (they make for a fun double bill with the lights off), or their increasingly diluted spin-offs in which these married demonologists sometimes appear, you can tell from the sluggish, mostly dull ‘Annabelle Comes Home’ that the Warrens have seen it all. Taking custody of a creepy possessed doll like an early-’70s version of the ‘Ghostbusters’, they place it seated upright like a toddler in the back seat of their car as they drive through the moonlight. Maybe that’s the Warrens’ idea of funny. You wonder about their love life.

Now that would be a movie. Alas, this seventh, exhausted entry in the ‘Conjuring’-verse plays more like a made-for-TV throwaway: Here’s what happens inside the spooky Warren home – always with the motes of dust hanging in the dim light – when the parents are away and the kids get up to no good. (Had 1972’s ‘Children Shouldn’t Play with Dead Things’ not already claimed the perfect title, it would have been an obvious keeper.) In this film’s favour, it has Mckenna Grace, a persuasive old soul in Netflix’s ‘The Haunting of Hill House’, as the Warrens’ ten-year-old daughter, Judy, who’s already attuned to supernatural vibrations. She’s got a blonde babysitter, Mary Ellen (Madison Iseman), who bakes cakes and listens to Badfinger. To make the plot more interesting, there’s another teenager with a certain fearlessness, Daniela (Katie Sarife), which causes her to open the locked chest where the demon doll is contained.

Still, nailing both the period décor and the psychology of thoughtful girls isn’t enough for a horror movie. Director-screenwriter Gary Dauberman can’t glean thrills from the material; eventually, he resorts to that old ghosts-are-dragging-me-backwards-on-the-floor trick. Annabelle herself remains an eerie piece of prop work, lifelike enough to suggest a pallid, reanimated corpse (smartly, none of the ‘Annabelle’ outings resort to Chucky-style animatronics). But why unearth Milton Bradley’s forgotten 1967 board game ‘Feeley Meeley’ – in which you reach into a box and grab… who knows what? – and not take it to the icky place it needs to go? This film is filled with these kinds of missed opportunities.

Ultimately, it’s undernourished where it counts, in the jolts department. Dedicated ‘in loving memory’ to the real Lorraine Warren (who died in April at age 92), ‘Annabelle Comes Home’ would have been a more respectful tribute to her legacy had it been frightening in the slightest.