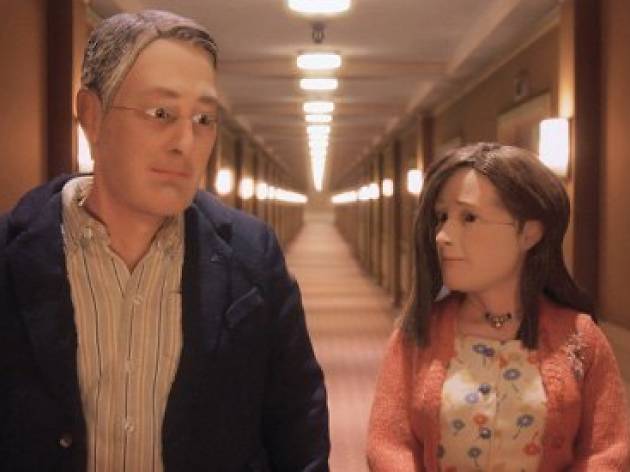 ‘Anomalisa’ is an animation about a lonely man on a business trip written and co-directed by Charlie Kaufman, the writer of ‘Adaptation’, ‘Being John Malkovich’ and ‘Eternal Sunshine of the Spotless Mind’. Like all of Kaufman’s films, which tend to play like Woody Allen movies on hallucinogens, it gives us a man in crisis and invites us to enjoy or recoil from his fantasies – or both. Here, the stop-motion puppetry adds new wonder: soft, fluid, realistic with just a hint of strangeness, meaning that you can see the joins in characters’ faces like they’re wearing masks.

Michael Stone (the voice of David Thewlis) arrives in Cincinnati, Ohio to give a speech at a conference of customer-service workers. Kaufman indulges banalities: catching a taxi, checking in, ordering room service, a fractured call home to the wife and kid. But, as in all Kaufman’s films, somewhere we leave behind reality and enter the world of Michael’s mind. Or at least we experience a mix of the two that’s impossible or even unnecessary to unpick.

Once unpacked, Michael has a nightmare drink at the bar with his troubled ex, Bella, who he telephones out of the blue. He drinks. He wonders if he’s cracking up. He wanders into a sex shop. Back at the hotel, he strikes up an out-of-character rapport with a pair of women in town for his talk and spends the night with shy, adoring Lisa (the voice of Jennifer Jason Leigh; every other voice in the film is performed by one actor, Tom Noonan). It’s a blissful island in a sea of troubles. It leads to an astonishingly truthful sex scene – so truthful that maybe only puppets could perform it?

Kaufman and co-director Duke Johnson quietly probe the biggies: happiness, disappointment, love, living with other people, mentally hanging on to everyday life by its threads. It’s what you imagine might have happened if Kaufman had got his hands on ‘Up in the Air’ or ‘Lost in Translation’. (Perhaps a creepy mechanical Japanese sex doll is a nod to the latter; certainly Kaufman kicks the self-satisfied stuffing out of the former.) It’s both soaringly romantic and truly sad. Considering the labyrinthine plotting of Kaufman’s ‘Synecdoche, New York’, his only other film as a writer-director, this is also strikingly simple. But it’s no less majestic, imaginative or moving.