Ant-Man and the Wasp

Film, Action and adventure
Recommended
2 out of 5 stars 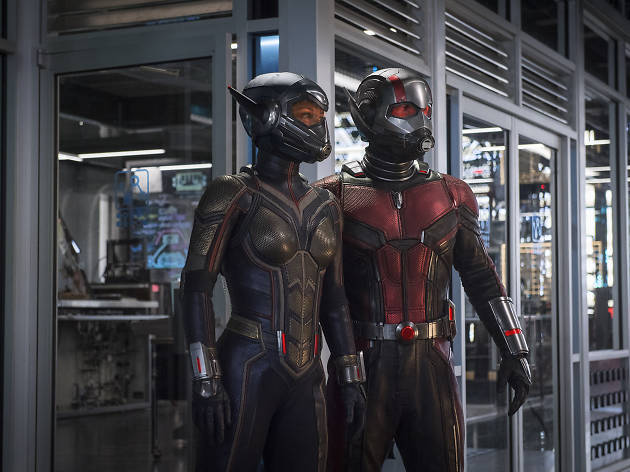 Paul Rudd and Michael Peña spark but the fun levels get shrunk in a so-so second Ant-stalment.

The first ‘Ant-Man’ movie succeeded largely because of its less-is-more approach: a livewire heist caper stuffed with Honey-I-Shrunk-the-Avenger-style visual gags. It leant hard on Paul Rudd’s guileless charm as criminal-turned-micro-hero Scott Lang and some scene-stealing turns, spearheaded by Michael Peña as Lang’s motor-mouthed buddy Luis. Diminishing returns bite, though, in a sequel that strains hard to be effortlessly fun but lacks the same helter-skelter irreverence.

We meet Lang under house arrest for siding with Captain America in ‘Civil War’ way back, trying again to go straight. Of course, you can’t keep a besuited burglar cooped up for long. Cue grumpy genius Hank Pym (Michael Douglas) and still-underutilised daughter Hope van Dyne (Evangeline Lilly) roping him into their quest to save Hank’s long-lost wife Janet (Michelle Pfeiffer, underemployed). For 30 years, she’s been stuck in the Quantum Realm, a place where all logic bends in service of the plot, but Hank may have a way of rescuing her, with Hope’s superhero alter-ego the Wasp helping out.

Cue an uninspiring quest and chunks of pseudo-scientific exposition that’ll make sense only to those with degrees in Marvelology. There’s a solid chase sequence, using some of San Francisco’s very fine landmarks, but the low-stakes villains, anodyne superbaddie Ghost (Hannah John-Kamen) and out-of-place black marketeer Sonny Burch (Walton Goggins) are anticlimactic after the charismatic dread of Thanos in ‘Avengers: Infinity War’.

Even Peña and an able supporting cast that boasts a bear-hugging Bobby Cannavale are hamstrung by a script where too many jokes fall flat. You get the impression it doesn’t matter who lives, dies or shrinks down really, really small – ’Ant-Man and the Wasp’ is all in pursuit of some MCU masterplan. If only the journey there was a bit more of a buzz.