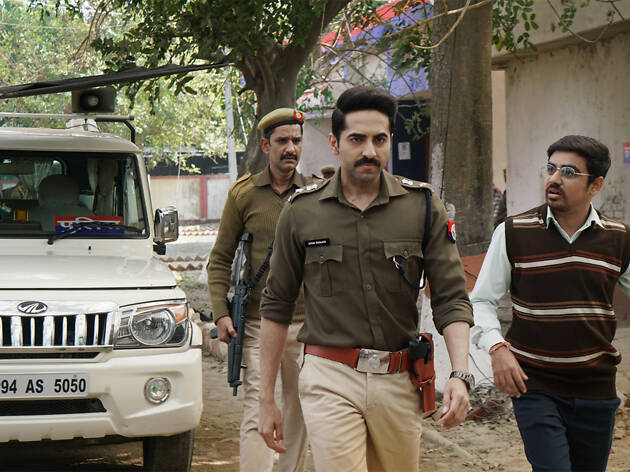 This Hindi thriller is a moody, good-looking and pointed statement on caste in India.

This good-looking, gutsy police procedural is a reminder that there’s more to Indian cinema than Bollywood. Writer-director Anubhav Sinha tackled Islamophobia with his last film ‘Mulk’, a drama about a subject so incendiary that it was effectively banned in neighbouring Pakistan. This time he gets his teeth into his country’s toxic, 1,000-year-old obsession with caste – an equally contentious issue. Sinha, admirably, is not one for the easy life.

Loosely inspired by true events, the plot of ‘Article 15’ plays a little like a Hindi version of ‘Mississippi Burning’. Two Dalit girls have been found murdered in a rural town in Uttar Pradesh, and a third is missing. The resident police chief is leaving with his tail between his legs and idealist big city cop Ayan (Ayushmann Khurrana) has taken over, determined to do some good. As he soon discovers, Article 15, a clause in the Indian constitution banning prejudice on the basis of caste, doesn’t hold much water in a backwater that’s brimming with conspiracy, corruption, angry protest and violence after the lower castes.

A major Bollywood star, the charismatic Khurrana handles this moody milieu with restrained skill, giving his urbane cop an air of self-satisfaction that rubs the locals up the wrong way. Sinha is at pains to show how outmoded views of caste are at odds with modern, progressive India’s view of itself, even sending it up in a scene that has Ayan asking a group of colleagues to reveal their caste only to discover that no two have the same status. Even Ayan himself, a high-caste Brahmin, is a rung or two down the pecking order. Not only is the system outmoded and dangerous, Sinha is saying, it’s absurd.

The rural vistas – swamps, arid fields and dusty settlements – are given an eerie glow by Ewan Mulligan’s magic-hour cinematography. It looks like the sort of place where bad things might happen, and sure enough, they do. If they’re often accompanied by billowing clouds of smoke (Sinha is big on people emerging from clouds of smoke) and the odd overblown pyrotechnic, the storytelling never lacks for sincerity and quiet power. It’s a cry from the heart with a courageous message.