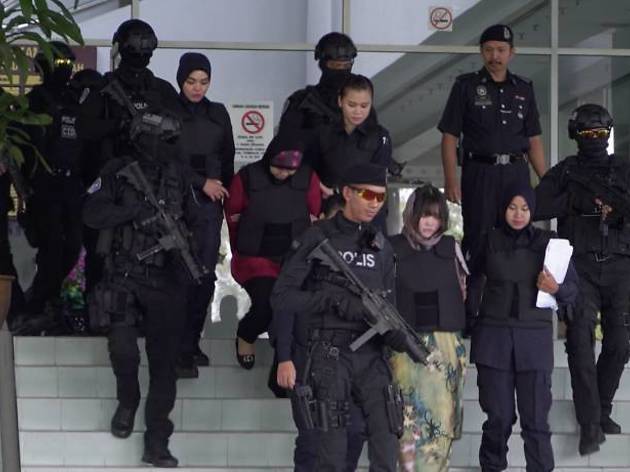 Do you remember when, in February 2017, North Korea leader Kim Jong-un’s estranged older brother Kim Jong-nam was fatally poisoned in broad daylight in Kuala Lumpur airport? This detailed, sober doc recalls the killing and the next stage in the story: how two young women, one Indonesian, Siti Aisyah, the other Vietnamese, Doan Thi Huong, were caught on security cameras administering poison by sneaking up on Kim and rubbing liquid in his eyes. The pair were arrested and sent to trial: the main question hanging over the case was whether one or both were complicit in murder, or, as they claimed, they had been duped into believing they were taking part in a filmed prank for television.

This film is fairly straightforward and low-key in its execution, but what a story it tells. It maps out North Korean power struggles, the role of the CIA, poverty, exploitation, police incompetence and the nefarious behaviour of a foreign power on distant soil. The access is excellent: director Ryan White takes a primarily journalistic approach, leaning on courtroom audio and interviews with key lawyers and reporters close to the case, as well as delving into the backgrounds of both Aisyah and Huong, so that they become fully-rounded personalities, not just faces in a bizarre news story – which is crucial to understanding how they became embroiled in this crime.

The argument that they were executing a ‘prank’ is absurd on the surface, but Assassins digs deep into the argument and shows how it’s credible that they were merely puppets of a group of male North Korean operators who themselves evaded capture and trial. The film also shows how close two people can come to the death penalty when geopolitical forces are not in their favour. I won’t reveal the outcome of the trial, but Assassins goes a long way to helping us understand how Aisyah and Huong ended up in the dock in the first place.

Director:
Ryan White
You may also like
Popular movies
We know this city. Do you?