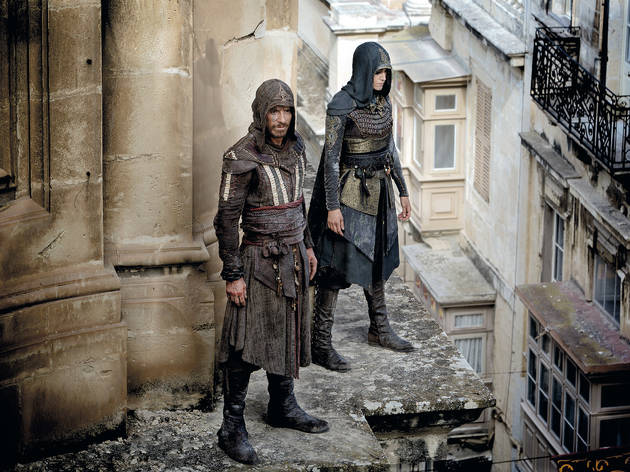 Gamers will know exactly what ‘Assassin’s Creed’ is; everyone else will need a little introduction to this solemn, brutal adaptation of the huge-selling computer game. Offering more than its fair share of head-scratching moments, it stars Michael Fassbender as a time-hopping member of the ‘Assassins’ – a secret order said to be at loggerheads for centuries with the Knights Templar over possession of the sacred apple from the Garden of Eden.

If this freestyle plundering of medieval and religious history sounds a bit like ‘The Da Vinci Code’, it is, just a little. But as we hop between Madrid, London and Texas in 2016 and Andalusia in 1492 (with a quick stop in 1986 California) this is darker, more straight-faced and humour-free territory than Dan Brown. A collision between moody, smoky swords-and-daggers historical fantasy and sleek-lined modern-day sci-fi, the overall dimension-shattering vibe is more like ‘The Matrix’.

We meet Fassbender in two time periods. In 1492, he’s an assassin set on forcing the ruling sultan (Khalid Abdalla) into submission. In 2016, he’s a convicted criminal, Callum Lynch, rescued from the jaws of execution by a shadowy, Madrid-based scientific organisation run by Sofia (Marion Cotillard) and her father Rikkin (Jeremy Irons). Where ‘Assassin’s Creed’ demands full attention is the concept of ‘DNA memory’ that links both periods. We watch as Callum essentially plays a virtual-reality experience controlling himself in the past, while in the wings Sofia and Rikkin play out their own family power games.

The film reunites Fassbender, Cotillard and director Justin Kurzel, who worked together on 2015’s ‘Macbeth’. Common to both movies is a brooding atmosphere and a bone-crushing, unsentimental approach to action and violence. The relentless gloom can feel oppressive, but there’s plenty of ambition here, especially in the layered storytelling and woozy sense of time and place, with plenty of soaring aerial shots that nod quietly to the all-seeing eye of a computer game.