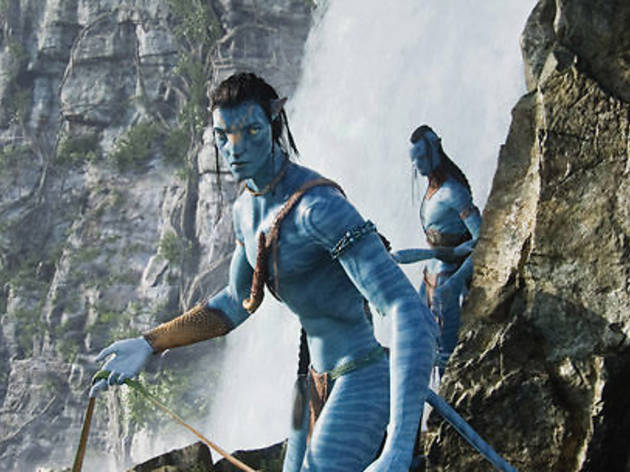 It’s evident by now, if it wasn’t already, that the man who gave us the Terminator movies, Aliens, The Abyss, Titanic and, um, Piranha II: The Spawning paints in ridiculously broad strokes. Yes, James Cameron tries to reinvent the wheel with each new effort, which isn’t a knock on the writer-director’s apparent preference for groundbreaking special effects over all else. But his narratives are bare-boned, reduced to the basic elements of action and performance. At their best, they come off like Neanderthal cave drawings, the captivating scribblings of an artist whose constant goal is to build a world—and an accompanying, society-influencing myth—from the ground up.

The much-hyped sci-fi actioner Avatar is the perfect showcase for Cameron’s strengths...and his flaws. Every vista in the film’s fictional setting—a lushly forested moon named Pandora, light years from an environmentally decimated Earth—was created in a computer. Pre-release spin suggested that this alien otherworld, populated by tall, blue-skinned creatures called Na’vi and now ground zero for greedy human encroachment, was so photorealistic it was as if Cameron truly hauled cast and crew to some distant galaxy. Although, in truth, it all looks artificial (half immersive video game; half astonishingly animated giant Smurf epic), that’s not necessarily a bad thing.

From the get-go, Cameron sets up a sharp distinction between the human and Na’vi milieus. His protagonist, a paraplegic Marine named Jake Sully (Worthington), is ordered to infiltrate one of the indigenous tribe’s villages by climbing into a kind of fairy-tale sleeping chamber and linking with a human-alien hybrid called an avatar. Whenever he awakens in this surrogate, with a fully mobile body, Jake’s surroundings seem to gain color and vivacity. Pandora’s sumptuous scenery and Sully’s budding love affair with a female Na’vi warrior, Neytiri (Saldana), slowly take root before his sympathies start to shift. This is a dream world that, the longer he spends in it, starts to become his preferred reality.

It’s a subtle and canny bit of manipulation on Cameron’s part to make his character and his audience long for computerized fakery over the recognizably real. He stacks the deck by having most of the human-only characters act like comic-strip exaggerations of military and corporate might—Stephen Lang’s scarred warmonger and Giovanni Ribisi’s weasely capitalist middleman being the most explicit examples—and it’s in this respect that Avatar annoys. Like Billy Zane’s hootable Titanic cockblocker, Cameron’s villains are airless miscreants, given to mock-relevant, cartoon-bubble pronouncements about “shock and awe” and “fighting terror with terror.” To be fair, few of the characters ever speak above the level of playground sound bites (what, no room for “Let’s roll!” James?), but that still doesn’t excuse Cameron’s indulgent habit of shortcutting characterization in order to make facile points.

Then again, maybe such concerns are for skowngs (that’s Na’vi for “morons”). We’re here to see spectacle, after all, and Cameron more than delivers the goods: Flora and fauna glow with a mesmerizing translucence; strange and bizarre creatures appear at every turn (the Hammerhead Titanothere, a rumbling, rhinoceros-like beastie, is a personal favorite). Best of all, the Na’vi have a freedom of movement and expression that belies their motion-capture origins. They seem genuinely alive and distinct, especially in the case of a village matriarch (CCH Pounder) whose bawling breakdown after the destruction of a sacred Na’vi tree is as moving a computer-assisted display as Bob Cratchit’s bloodshot-eyes lament over Tiny Tim in Robert Zemeckis’s A Christmas Carol.

Cameron may be a tech-head, but he has a pleasantly corny, emotive soul that shines through whenever his toys don’t get the best of him. Avatar, thankfully, has no equivalent to those digital extras in Titanic whose sole purpose was to take head-over-heel plunges after colliding with sinking-ship bric-a-brac. Maybe not being bound by history or Earthly reality freed Cameron, allowing him to engage his cybernetic Eden (those towering waterfalls! those floating mountains!) with a curious back-to-nature reverence. It’s more than a little disconcerting that the film’s manufactured landscapes—with Jake Sully acting as their destined-to-be-reborn pantheistic savior—have a comparable weight to the most rugged terrain of our own great outdoors. The question lingers as the movie comes to its triumphant body-swapping close: Is this a pro-environment parable or a prophecy of virtual realities yet to come? Cameron’s new world may very well be a verdant Matrix.