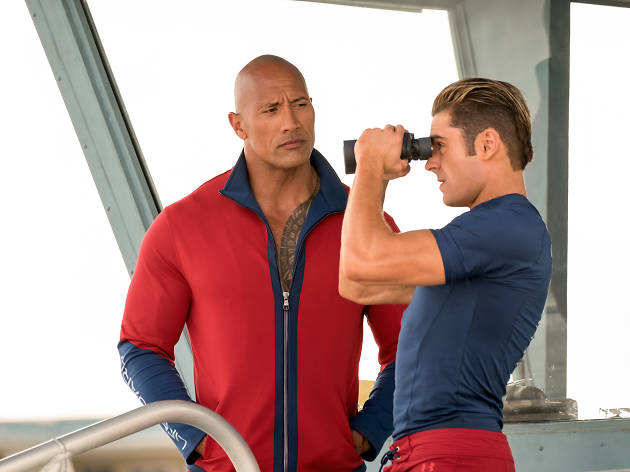 Everyone in ‘Baywatch’ seems on the verge of cracking up about being in a movie version of ‘Baywatch’ – how could they not be? The laughs in director Seth Gordon’s surprisingly fun and self-mocking comedy don’t sneak up on you so much as hail you from a mile off with an air-horn blast and then bonk you over the head. This is a film in which lifeguard Dwayne ‘The Rock’ Johnson explodes out of the water – in slo-mo – with a rescued paraglider in his arms, while porpoises flip behind him in celebration.

The thing about this Hollywood version of the butt-ogling ’90s TV phenomenon is that, pretty quickly, it makes you feel in on the gag. Taking lessons from 2012’s wonderfully silly ‘21 Jump Street’ (in which Channing Tatum and Jonah Hill scientifically proved that bad television need not result in bad filmmaking), ‘Baywatch’ owns its preposterousness. The actors are what save it. Johnson builds on his subversive persona of hulking, dimwitted likability, and he’s joined by ‘Neighbours’ star Zac Efron, who plays a cocky, disgraced Olympic swimmer, Matt Brody, nicknamed the Vomit Comet. (Confused by his bodacious lifeguard team’s role in solving crime, Brody says it sounds like a ‘really entertaining but far-fetched TV show.’)

Because this is ‘Baywatch’, it’s crude (brace yourself for several movies’ worth of penis jokes – flaccid and otherwise), but at least the camera is an equal-opportunity lech. Kelly Rohrbach and Alexandra Daddario bring a winking awareness and unprudish confidence to their roles as beach candy, and every second of footage is caffeinated with ticking techno beats.

The best compliment you can pay this film is that when Pamela Anderson and David Hasselhoff do show up for their somewhat desperate cameos – neither is anything special – they actually slow the flow. The pair seem too stuck in the mud for the movie’s deft-touch postmodernism. (That’s right, I just called ‘Baywatch’ postmodern.) Those actors set the mould; today’s ‘Baywatch’ shatters it, because it can.