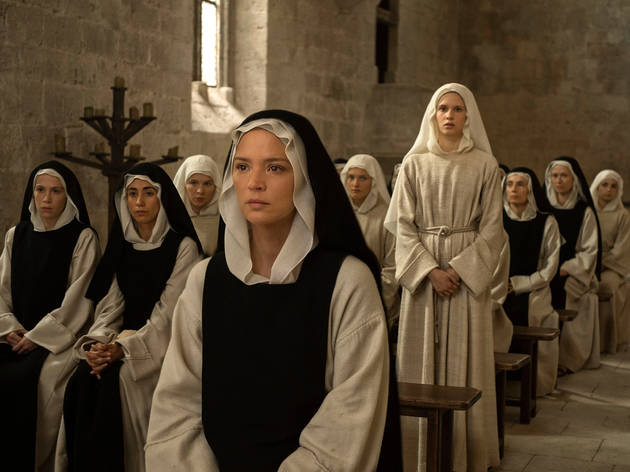 What a gloriously maddening and silly Renaissance romp this is. Paul Verhoeven, the Dutch veteran of classy camp (Elle, Basic Instinct), takes us back to a convent in seventeenth-century Italy and throws everything at the church wall, from sexed-up nuns and crazed snakes to a rampant plague, comets in the sky, religious icons-turned-sex toys, gynaecological torture tools and folk being burned at the stake. The details are wild, but the presentation as a cleanly designed, glossy French language prestige story is stately in a fairly uninteresting way.

Benedetta (Virginie Efira) is the nun at its heart – a character based on fragments of a true story – whose claim to have a direct line to Jesus throws the convent and church hierarchy into a spin, not least because her claims to affect miracles run parallel with her having a passionate affair with a young female novice, Bartolomea (Daphné Patakia).

Benedetta arrives in Pescia as a confident, feisty child with parents willing to pay the necessary amount to the Reverend Mother (Charlotte Rampling) to let her jump the queue and enter Holy Orders. The child immediately provokes whispers of miracles when a statue of the Virgin Mary falls on her and she escapes unharmed (after giving its exposed nipple a quick kiss). The effect of this event is a useful lesson for a smart young girl not content with fading into the background. It’s also a precursor to a flamboyant religious and sexual melodrama. By the time Benedetta is an adult, she’s displaying stigmata, and with miracles come power: Rampling’s character steps aside to let Benedetta become Reverend Mother herself and soon the church higher-ups take notice, bringing a papal representative (Lambert Wilson) to the scene.

None of this is subtle, and the sex scenes wander deep into the territory of erotica with flashes of knowing humour. Verhoeven’s provocations feel machine-tooled to poke religious conservatives into cries of sacrilege, and perhaps they might have reacted like that 30 or 40 years ago. These days, though, the Vatican might just be grateful that anyone cares. Treat Benedetta as a pile-up of shallow pleasures undercut with a sardonic wink and some fairly obvious comments on power and corruption, and there’s fun to be had. Look for any deeper logic and you’ll be disappointed.