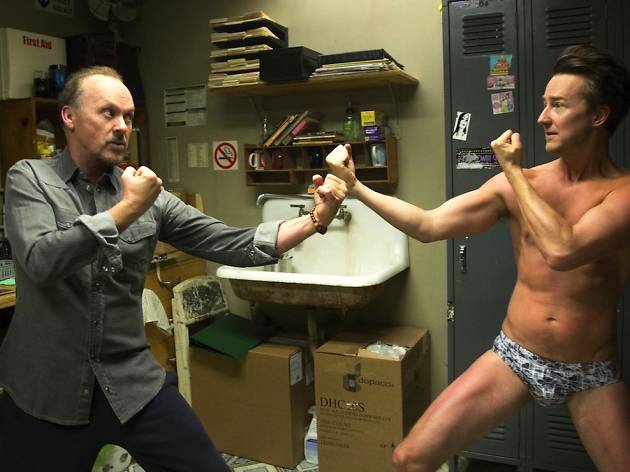 ‘Most of the successful people in Hollywood are failures as human beings.’ So said Marlon Brando. But what happens when their 15 minutes are up? It’s not like failure suddenly transforms former mega-celebs into humble human beings who can pick up their own coffee from Starbucks. That's Michael Keaton’s problem in this savagely funny, strangely sweet, sad and utterly brilliant New York-set comedy from Mexican writer-director Alejandro González Iñárritu, better known for his gloomy, state-of-the world dramas 'Babel' and '21 Grams'.

Keaton is Riggan Thomson, an actor who raked in the cash in the early 1990s as a lame pre-‘Avengers’ superhero in a blockbuster franchise (a clear nod to Keaton's own days as Batman). He hasn’t made a Birdman film in years – but Birdman is still part of him. Quite literally: there's a naff, booming comic voice in his head (‘You're the real deal’), and it gives him superhuman powers. Is Birdman a figment of Riggan's imagination? Is this a dig at superstar actors with inflated egos who have trouble telling the difference between real-life and their movie characters? Whatever it is, Riggan has problems. He’s trying to reinvent himself for a second act as a Serious Artist, remortgaging the house in Malibu to write, direct and star in an adaptation of a Raymond Carver short story on Broadway. But Birdman is shitting on the plan, telling Riggan to make a reality TV show instead of this ‘piece of shit’.

'Birdman' is hilarious simply as a film about putting on a play, shot by Iñárritu in a jittery, handheld style. Emma Stone, with ripped tights and bleached hair, is brutally funny as Riggan's messed-up daughter, fresh out of rehab. There’s something a bit Wes Anderson for grown-ups about these people. Edward Norton is a stage actor a couple of decades too old for his bad boy, rock-star-of-Broadway routine, who joins the troubled play at the eleventh hour. When he gets an erection on stage, Stone waspishly points out it's getting more Twitter reviews than the play.

This isn't the super-cynical, snarky piss-take of actors it might sound like. Iñárritu feels for these people. Norton, hitting on Stone, tells her with disarming sincerity that, if he could have any part of her, it would be her eyes – so he could see New York again as a 20-year-old. It’s an extraordinarily touching moment. Best of all, Keaton is dream casting, and he’s fearless, never holding back with the rodent-like, twitchy facial tics. The film's subtitle is: ‘The Unexpected Virtue of Ignorance.’ And the brutal truth is even when he’s trying to be a good dad, Riggan can never get past his own ego. And that same ego (Birdman?) will also protect him from life's slings and arrows.

We know Iñárritu has a dark side (just look at his previous films like ‘Amores Perros’ and ‘Babel'), and it's not entirely hidden here. Life is disappointing, his film is saying (it opens with a Carver quote, ‘Did you get what you wanted out of life?'). But it's also beautiful and, at times, unexpected. This film does real justice to that idea: it's dazzling and rambling, intimate and sprawling, and it's carried along by an infectious, off-the-cuff jazz score. As soon as it ends, you'll be dying to fly with it again.