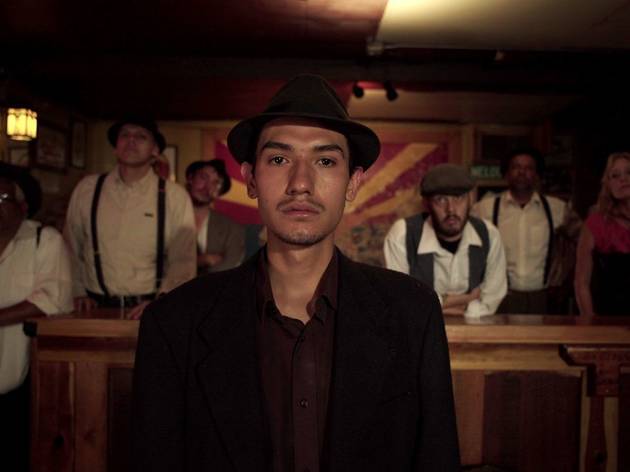 An Arizona border town submits to an experiment that leads them into the past, darkly.

In a Faustian bargain struck way back in 1917, the lawmen of Bisbee, Arizona, a small town on the Mexican border, rounded up approximately 1,300 copper miners—most of them immigrants on strike—to load them on cattle cars and deport them. Decades later, in 1975, the mining company shut down, turning that original sin on its head and leaving behind an economic hole into which the deporters’ grandchildren stumbled. No one thrives in Bisbee anymore, not even the tour guides.

It would be enough for any documentary to tell this piece of hushed-up history, but Bisbee ’17 is onto something more radical; watching it is like witnessing the defusing of a time bomb from a foot away. For some reason (maybe it’s the presence of the camera crew itself), the guilt-stricken residents of today’s Bisbee have decided to re-create the incident on the day of its 100th anniversary. Descendants of the original evictors, including a pair of brothers whose elders were on opposite sides, cosplay with rifles and scowls, while local actors take to the streets chanting labor slogans (among them, Fernando Serrano, a gay Mexican-American who comes to symbolize much more than century-old socialism).

How filmmaker Robert Greene got an entire town to ham it up remains a mystery, but his gift for inviting self-interrogation (also on display in his equally fascinating Kate Plays Christine, a 2016 hybrid about an actor’s plunge into the life of a suicidal newscaster) marks him as an innovator who may become a future Errol Morris. His latest doesn’t merely make do with fly-on-the-wall observation: It has elaborately staged scenes of drama and even a musical number, all performed by amateurs. Throughout, the townsfolk tell their own story.

Why are they doing this? “Group therapy,” someone suggests, and he’s not far off: The Bisbeeans, remarkably game and open-minded, know that they live among ghosts, ones that need exorcising. In the meantime, Bisbee ’17 creates moments of nightmarish power, as when militiamen charge into a convenience store and strong-arm a Lebanese shop owner out from behind his lotto counter. The past intrudes on the present with sickening, Purge–like immediacy. We’re only a hair away from such scenes playing out in real life. Let’s hope Greene keeps his schedule free for the next few years.