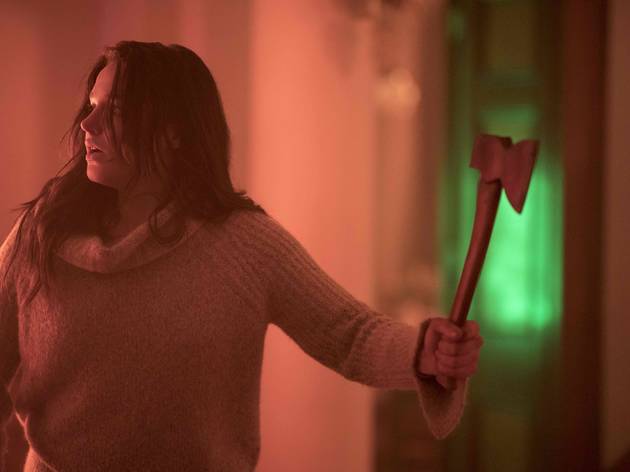 Sophia Takal's update of the cult classic turns the real horror of campus assault into a springboard for cheap thrills.

The 1974 original is a quiet, near-perfect thing: very possibly the first slasher, made a few years before ‘Halloween’. While a film about stalking sorority girls doesn’t seem intended to carry a feminist message, director Sophia Takal (working with co-screenwriter April Wolfe) gives it the old college try – strenuously, ponderously, loud enough for the back of the classroom. It’s the kind of patronising ‘You go, girl’ therapy session in which a character says ‘You messed with the wrong sisters’ and the camera zooms out on a phalanx of heavily armed, stern-jawed women.

That might have been forgivable had ‘Black Christmas’ been scary in the slightest, but it’s hard to brew fear when you’re mid-lecture. Occasionally the atmosphere of an emptied-out campus insinuates itself, the stone gargoyles staring down, and that’s lovely. But the rare stillness has to compete against constant zingers, too much talking or texting and some painfully obvious frat-boy villainy. Riley (Imogen Poots) has a brutal date rape in her recent memory (elsewhere in the film, a misogynist professor obliquely refers to Brett Kavanaugh), but these serious notes are at odds with ‘Scooby-Doo’-style unmaskings and inept action sequences.

It’s worth noting that Takal’s two previous projects – the De Palma-like psychodrama ‘Always Shine‘ and ‘Into the Dark’ episode ‘New Year, New You’ – are both excellent. Ironically, they’re more empowered by being less didactic. Blumhouse Productions, the horror-making machine, seems to have backed her into a corner: because of its peppy house style (and an imposed PG-13), Takal can’t summon the creeping terror of the original thriller (or even the ickiness of the torture-porn-adjacent 2006 remake, which was itself fairly lousy); nor is she given licence to effectively explore her own ideas. It’s a movie made for a syllabus, not to entertain.