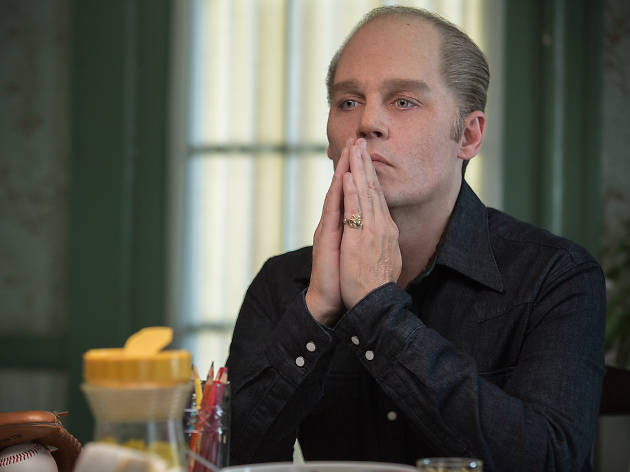 Anyone easy-to-please and mourning the fact that Martin Scorsese hasn’t made a mobster flick in a while should take heart from ‘Black Mass’. It’s the entertaining, if limited, tale of how seriously nasty South Boston crim James ‘Whitey’ Bulger (Johnny Depp, looking like an embalmed vampire with terrible teeth and a bald patch) operated with near immunity from the late 1970s to the early 1990s. Bulger cut a deal with an FBI agent, childhood pal John Connolly (Joel Edgerton), who in turn was seduced by the danger and rewards of the thug life he was meant to be eradicating.

It’s a knotty tale of loyalty v legality. Bulger's brother Bill (Benedict Cumberbatch) is a state senator, and as Bill’s power increases Bulger’s crimes escalate: from ripping off vending machines to shipping drugs and supplying arms to the IRA. So the material is meaty, and director Scott Cooper (‘Crazy Heart’) offers an appropriately grim and moody atmosphere; ‘Black Mass’ is painted in greys, blues and blacks and offers sobering bursts of psychopathic violence.

Yet the way the film embraces its near-30-year time span, regularly cutting to police interviews with informers years later, can feel more episodic than epic. The key relationships in the film – especially those between men and women – feel undercooked, too. A scene in a hospital between Bulger and his partner Lindsey Cyr (Dakota Johnson, underused) as their son lies dying in the next room is emblematic of a repeated failure to scrape beneath the surface of what these people really mean to each other. Moreover, some of the film’s livelier moments feel like replays of better films – not least a scene involving Bulger and a nervy FBI agent that is like a straight rewrite of Joe Pesci’s ‘I’m funny, how?’ scene in ‘Goodfellas’.

Still, Depp is more engaging than he’s been in years, even if his performance can feel a little restricted and one-note. He’s joined by an eye-grabbing supporting cast including Kevin Bacon, Peter Sarsgaard and Juno Temple, as well as some more anonymous meatheads who play grizzled lieutenants on whose pock-marked faces you could play 18 holes of golf.

But it’s Edgerton’s Connolly who most impresses and is the heart of this film. His swagger increases in line with the price tag of his suits; he’s harder to read; his tragedy is subtler; and his downfall is especially well-handled. It’s Bulger whose grim appearance and even grimmer behaviour ‘Black Mass’ indulges. But it’s the quieter, more complicated Connolly who offers the film’s subtler pleasures.