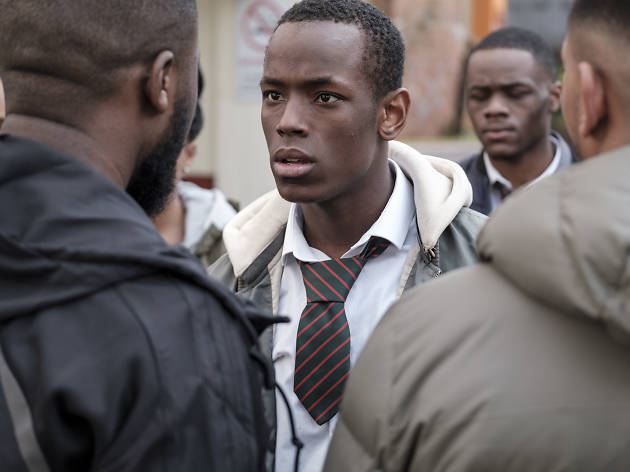 Two kids end up on opposite sides of a South London gang war in this attention-grabbing debut from 'Shiro’s Story’s Rapman.

There’s something distinctly Shakesperian about this tale of two boys – newcomer Stephen Odubola and Micheal Ward (‘Top Boy’) – who start out as close as brothers but end up deadly enemies when they fall out over a girl. Odubola plays the softly spoken Timmy; Ward is his best mate Marco. They go to school together and hang out after hours but are cursed to come from warring SE postcodes. Inevitably, they’re drawn into a grim cycle of gang violence that long predates them.

Based on writer-director Andrew ‘Rapman’ Onwubolu’s childhood, ‘Blue Story’ is part music video, part gang drama. With US studio backing (Paramount is distributing the film), it’s spun indirectly from Rapman’s 2017 web series, ‘Shiro’s Story’, a YouTube sensation that clocked up more than 20 million views. What makes ‘Blue Story’ feel genuinely fresh as an urban drama – and connects it with ‘Shiro’s Story’ – is Rapman’s own intermittent presence as a kind of one-man rapping Greek chorus. His rap vignettes first set the scene, then briskly drive the story forward.

The device enables ‘Blue Story’ to establish its characters and their motives swiftly, while stamping Rapman’s own unique style on the depressingly familiar litany of violent confrontations and misdirected testosterone. But it comes with drawbacks: the second half of the film might have benefited from a slower pace and more character development instead of another hip hop interlude.

It’s not always a subtle film, but then Rapman wants to engage with a youth audience used to watching online content. What his impassioned morality tale does do brilliantly is remind us that this is life for many kids in the city. It’s a vital story about contemporary London. n

Director:
Rapman
Screenwriter:
Rapman
Cast:
Stephen Odubola
Khali Best
Micheal Ward
You may also like
Popular movies
We know this city. Do you?